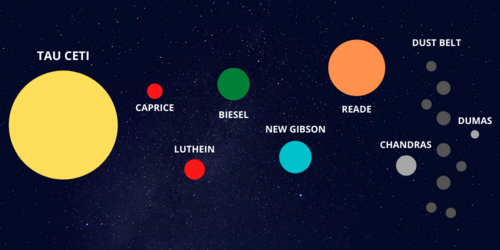 Tau Ceti is a system located in close proximity to Sol, and serves as the main base of operation for the megacorporation NanoTrasen. First settled in the mid 2100s, it houses three colonized planets, as well as two uninhabited ones.

Tau Ceti is governed by the Republic of Biesel, a young Republic that became independent of the economically troubled Sol Alliance in 2452 due to heavy pressure by Nanotrasen. There is still resentment in the Sol Alliance over the loss of such a wealthy system, while Nanotrasen continues to have a heavy hand in all levels of Tau Ceti.

The closest planet to Tau Ceti's star, caprice is a barren world completely devoid of life. The harsh surface conditions prove hostile to all attempts of exploration, and even advanced scientific equipment cannot survive in its extreme environment for long without breaking down. 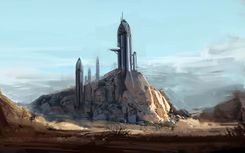 One of the numerous research outposts around the Luthien northern sea.

Placed within the inner reach of Tau Ceti's habitable zone, Luthien is a desert planet with a thin, unbreathable atmosphere and small amounts of liquid water located around its cooler poles. Small amounts of human habitation are found near the north and south polar seas, and constitute of controlled-environment biodomes and research stations.

Luthien is the site of many testing and research facilities, such as those dedicated to weapons testing, or the development of flora and fauna that are able to adapt to extreme environments. 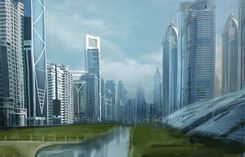 The third closest planet to Tau Ceti's star, Biesel is an Earth analogue that benefits from a temperate climate and breathable atmosphere. Water represents 56% of the planet's surface.

Biesel is the central population hub for Tau Ceti, with many large cities and a registered surface population approaching 11 billion. All settlements on Biesel were built with a goal of sustainable development in mind, so the threat of impending environmental disaster due to overpopulation or pollution is relatively nonexistent. The landmass of the planet itself is split into three massive continents, Astraeus, Selene and Eos; each hosting a multitude of cities and a continental capital. The planetary capital of Biesel is Mendell City, a megalopolis on the southern coast of the northern continent of Astraeus; of which it is also the continental capital. In orbit around Biesel, and its moon Valkyrie, are many multipurpose space stations, including orbital defence platforms and shipyards In a high orbit around the planet is Nanotrasen's Tau Ceti Branch Central Command Platform, the NTCC Odin, where bluespace shuttles depart from and return to as they move personnel between the various Nanotrasen installations around Tau Ceti.

Biesel is primarily a financial and agricultural center, with most of its citizens working in its service industry or commuting to New Gibson; this is not to say, however, that Biesel is without industrial capacity, it possesses significant industrial facilities, primarily centered on the mineral rich Eos. Tourism is also a major source of income, with visitors being drawn to Biesel's sprawling shopping centres and national parks alike.

Considered an ice world due to its location just outside the outer edge of the habitable zone of its parent star, resulting in very cold temperatures, New Gibson is the industrial powerhouse of Tau Ceti. As the atmosphere on New Gibson is too thin to support life, all of its population lives under biodomes.

The planet is a prime location for industrial development, since minimal terraforming is required, and populations of workers can be sustained in biodomes scattered across the barren landscape. Any activity on the planet's surface requires EVA equipment, but due to its high level of industrial development, the planet is the largest producer of consumer appliances, ship components, space station modules, and other manufactured goods in Tau Ceti.

The planetary capital of New Gibson is the Hengsha Arcology, or simply Hengsha, a self-contained complex mimicking the landscape of Biesel, complete with parks, waterfalls and wildlife. While New Gibson has a complex dedicated to virtually all industries, from personal grooming equipment to advanced AI components, its major industries are shipbuilding, construction materials, enterprise-scale medical equipment and electronics.

Originally assumed to be a nondescript planet to 21st century astronomers, Reade defied expectations when early explorers found it to actually be a modestly sized gas giant. But at 9 times the size of Biesel it is still a very large body. It mostly consists of hydrogen and helium with heavier elements near the core. It takes 98 years for Reade to complete an orbit around the star. It has over a dozen small moons.

Reade is most noteworthy for being the home of Anemostrovilos. This feat of engineering was created in 2370. It is a massive reinforced blimp holding a platform with a radius of 19 kilometers. The bio-dome city of Anemostrovilos is built on top of this platform. A massive anchor keeps the entire structure steady as it floats in Reade's upper atmosphere. It has a population of 43,394 as of 2459. It has nearly a hundred shuttleports and its local economy is a mix of harvesting the gasses from Reade as well as commercial services. The Anemostrovilos College of Pioneers is also located here, being a primary source of graduates for industrial fields. Reade remains a popular spot for tourism in Tau Ceti because it offers unparalleled views of the swirling gas giant beneath their feet. Unfortunately, the colony is buffeted by intense storms during the winter season and periodically faces traffic shut-downs for up to 3 days at a time at least once a year.

This is the farthest point of typical civilian travel, and is the farthest extent of regular patrols by the Tau Ceti national guard and NanoTrasen Emergency Response Team. Beyond Reade's orbit pirate activity enjoys a massive spike and many unwary ships that meander too far beyond the gas giant can suffer from a pirate ship eager to extort the passengers for safe travel back to civilized society.

Chandras is an icy body in a distant orbit of Tau Ceti. Although its surface contains lakes of liquid nitrogen, it is entirely metal-deficient, and possessing no infrastructures to speak of, is uninhabited and of low interest for the system.

Past Chandras, the Dust Belt is a thick ring of debris encircling Tau Ceti's solar plane and enclosing its inner planets. Debris varies in size ranging from microscopic dust particles to large asteroids the size of small moons. Contrary to popular belief, travel through the Dust Belt does not pose a major risk to spaceships, although the danger of rogue asteroids has discouraged mining operations from setting up in the area. 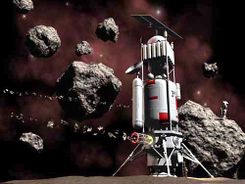 A NanoTrasen probe surveys an asteroid of the Romanovich Cloud, in search of Phoron deposits.

Dumas is an extremely small rocky body that orbits within the far reaches of Tau Ceti - obscured almost entirely by the dust belt, one of its defining features is an almost complete lack of light, resulting in temperatures nearing absolute zero. It is rumored that smugglers may be using stations in orbit of Dumas to move goods in and out of the Tau Ceti system.

The Romanovich Cloud is a shell of icy, rocky and metallic bodies that orbit very distant Tau Ceti, past even the Dust Belt. Rich in deposits of precious and semi-precious metals as well as radioactive elements, the Romanovich Cloud is the source of nearly all the raw materials used within Tau Ceti, as well as housing the largest density of space carp nests in the galaxy.

The cloud is also one of the few sources of Phoron, a volatile but highly sought-after compound, known for its uses in the biomedical and energy industries. Most of the sources of Phoron within the Romanovich Cloud are under the control of NanoTrasen, which has consequently established many high-tech research facilities in the area in the past few years.