Medina, or the Republic’s Prize, depending on who you ask, is an Elyran core world and one of the most populous planets in the Republic itself. It is located within the Jedeed Isfahan star system. Built atop enormous, shifting and suspended land vehicles they call their own cities is a population praised for its elegance and artistic prowess. The climate of Medina is calm, with little atmosphere - just enough to generate a warm red sky at day, and to breathe with respiratory gear. However, on the surface, the land constantly quakes and shifts with each passing moment - over weeks, no single location remains the same, as the entire tectonic assembly of the planet shifts. The largest industry on the planet is the export of finer goods and valuable commodities. The second largest is a unique bounty list referred to as the Phoron Bulletin, where the Elyran government contracts experts from across the galaxy to hunt phoron as it is uprooted across the planet’s ever-churning, twisting surface.

Medina’s capital, Drifa, is an exemplary depiction of the standard Medinean city-vehicle. Housing nearly sixty million inhabitants, it is essentially a sprawling cityscape which owes its survival amongst the changing environment to a genius invention known as magpulse drives. These devices suspend the city above the landscape and heavily dampen any impact the platforms receive. Thousands of these dot the bottom of the cities, and a keen observer could note the slow bobbing of the floating wonders as the ground quakes beneath them in waves. All cities on Medina are like Drifa, and any settlement made on the ground quickly succumbs to the tremors no matter how sturdy.

Medina has six large moons which exert extreme gravitational force upon the planet itself, partly the cause of its unpredictable and dangerous tectonic activity.

Medina’s colonies started early as a large-scale mining effort of rare materials in early 2330, under the Coalition of Elyra. Its geological activity provided obscene mineral wealth, with many ores never before seen unearthing themselves from the rock below. While the geology of Medina was and still remains a mystery, the harvesting of this wealth was an immediately apparent goal. Permanent settlements were impossible, and vessels large enough to field any decent material output were much too slow to be viable. The Coalition at the time sent their best, and these scientists toiled for nearly twenty years before the invention of the famed Magpulse drive.

In 2360, the magpulse drive had met its first test runs, with the first platform - known as Drifa (now capital of Medina) - being established in the southern hemisphere of the planet. While the first prototypes were rudimentary and overpowered to contrast the planet’s Earth-like gravity, the warp technology they harnessed would go on to develop more efficient drives that permitted the extremely rapid expansion of the planet’s surface colonies.

By 2375, individuals from across the Coalition of Elyra were migrating to Drifa and other newly-founded extraction platforms, and in this rush, the planet became a boomtown.

With little, if any failures, the suspended and floating cities of Medina continue to hover over the planet’s surface to this day. Thousands of settlements have made a home for themselves here. 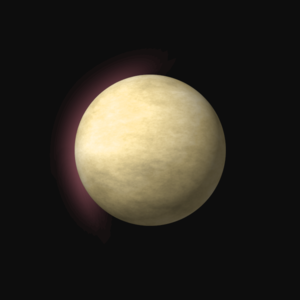 An image of Medina from orbit, displaying its rather dull features from a glance.

The social culture surrounding Medina is one of perfection and art, and the planet itself has built an astounding reputation for quality in its exports. Medinean goods are valued galaxy-wide and especially in the Republic of Elyra. The quality of goods can be attributed to the immediate availability of almost every planetside resource imaginable short of biological. Little needs to be imported to Medina thanks to this, making the vast majority of products entirely local. As a result, in the floating cities, creation is as deeply rooted in one’s basic routine as eating or drinking may be. As extracting materials grows more automated, the creation of all manner of commodities proliferates.

With the above said, art is a key factor of Medinean culture. The Republic’s greatest artists find themselves often starting out on Medina, drawn to the freedom such unfathomable resources provide.

Individuals born planetside tend to grow on a colorful mindset, seeing artistic liberties as an absolute necessity to take when confronting invention. Every invention, from the most luxurious hovercar to a simple kitchen appliance is seen as its own contained canvas upon which the absolute boundaries of the creator’s imagination must be pushed. This mindset usually boils down to “If something can not be beautiful, why make it?”

The Phoron Bulletin is a rather new entry to Medina, having only been formed in early 2430. However, since then, it has been responsible for countless millions of people from all over space seeking the planet’s booty.

This bulletin is essentially a bounty system established by the Elyran government for the sake of outsourcing massive workloads to external parties of all varieties. These workloads include but are not limited to phoron location and extraction, and is a highly dangerous form of work. While forms of travel are granted by Elyran officials in the way of hover-barges and extraction vessels, the usual Bulletin hunter is found using their own ships or even daring to make expeditions on foot.

The craggy surface of Medina obscures the real rules of the bulletin. The areas outside of the floating cities are exceptionally hazardous. The Elyran government keeps a close watch on the various teams they contract out to find phoron on the hazardous surface of the planet and has explicitly forbidden armed conflict between phoron hunters over phoron deposits on the planet's surface, with harsh penalties ranging from heavy fines and a stripping of phoron-hunting licenses, to even execution. Despite these risks, some phoron hunters still take their chances both with the Elyran state and other hunting parties and fighting and killing over deposits on the planet is not unheard of. The planetary authorities operate patrols around areas with high known phoron concentrations to both protect hunting parties and uncover the remains of those that have been lost to Medina, either through natural causes or conflict. Even so however, the Elyran Government has been known to overlook the transgressions of some hunting parties or dismiss their charges, coincidentally those parties usually being the ones with the largest phoron hauls or strongest connections to Elyran government or Elco officials.

The floating cities of Medina generally contain a healthy variety of people from all walks of life. While there is no major distinction between those not from the planet and people born planetside, the lifestyles may vary tremendously.

The majority of foreigners coming to Medina seek one of two things; the Phoron Bulletin’s bounties, or the wonders of the Medinean industry. Natives, on the other hand, tend to be born to middle-class families on the galactic scheme of things - the quality of life is comfortable for almost all natives. The dangers of the Bulletin are apparent to them, and thus Medinians tend to avoid this.

The industrial niche that Medina fills in being able to manufacture a wide variety of local goods leads to a fantastic economy in the modern age. As such, natives find themselves on equal footing financially with preconceptions of a divide between rich and poor being sometimes just lost to them. There is a small population of Non-Citizen persons on Medina as well, though much like those seeking to make it big in the phoron bulletin, they are involved with the phoron industry.

Those from off the planet seeking the Phoron Bulletin are often surprised by the cutthroat nature of other phoron hunters. Others who hear stories of how things work come prepared, knowing full well that the next deposit may spell disaster in the form of accidents or even illegal ambushes by foreign parties.

Planetside, the environment of Medina is highly unpredictable. The extent of the earthquakes and tremors which perpetually plague the planet make any sort of stationary settlement impossible to sustain. As well, travel by ground is incredibly dangerous, and every form of traffic is in some way aerial in nature. Even the native wildlife has long adapted to the nature of the planet, with only birds of prey and small flying creatures being the extent of notable fauna found. Stationary flora has proven to be nonexistent.