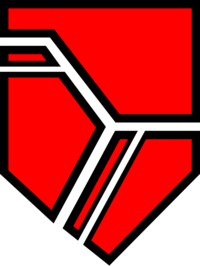 Even one matters in the battlefield.

Zavodskoi Interstellar is a manufacturing and development conglomerate founded in 2259. They specialize in all forms of weaponry, ranging from small arms and squad weapons, to armored vehicles and combat EVA equipment. Previously known as Necropolis Industries, Zavodskoi Interstellar has retreated from the genetic research scene to focus on military and police equipment in recent years. However, they still possess a significant genetics branch - though it pales in comparison to Zeng-Hu Pharmaceuticals.

Zavodskoi does not possess much in the way of static assets strewn across the galaxy. In an odd case among the megacorporations, its facilities are largely centralized to the Empire of Dominia and the Sol Alliance. However, its influence can be seen far and wide, as the products of their various manufacturing plants - down to the very finest handmade Zavodskoi firearm - is seen, everywhere.

If it shoots, stabs, slices or anything in between, it is more than likely branded at the side with Zavodskoi emblems.

Dr. Lydumila Zavodskoi rose to power as the CEO of Necropolis Industries following the entry of her predecessor into a coma. She has dramatically restructured the company away from Boytsov’s focus on genetics to concentrate primarily on arms development, with the aim of forcing Hephaestus Industries out of the arms market, and the expansion of IPC employees into every area of human space aside from the Empire of Dominia. The nature of her restructuring is so dramatic that she has opted to rename Necropolis to Zavodskoi Interstellar, in order to move away from Boytsov’s legacy. Dr. Zavodskoi herself is a private person, primarily working behind the scenes, but is said to be very shrewd and intelligent with a remarkable ability to play corporate politics. Interstellar observers worry that Dr. Zavodskoi may turn out to be as cutthroat, if not more so, than her predecessor when it comes to supplying conflict zones.

Motto: Even one matters in the battlefield.

Zavodskoi Interstellar has rapidly expanded from its home in the Sol Alliance, reaching to most of human space. Here are the locations of their primary and largest branches.

Nova Luxembourg, Dominia, X’yr Vharn’p: The Dominian branch can be found near the city center, prominently overlooking the Court of Chalser. Residing in what was once a bank, the grandiose exterior encloses a large genebank and research building that is well known for its incredibly high security. The grandiose edifices of the Nova Luxembourg branch have decayed in recent years, due to a lack of investment in Zavodskoi's genetics branch.

"The best defense is a Kumar offense."

Kumar Arms is considered the backbone of Zavodskoi Interstellar, founded in the Soviet Union, Earth in 2114. They are one of the most prominent manufacturers of military and police equipment, with a long history of selling to any customer willing to pay their prices.

Kumar Arms, also known as the Kumar Machinery Development Bureau, is one of the most famous and well known arms manufacturers in the Sol Alliance, with a long history stretching back to their founding in February 2114 by Ilyich Kumarvna. Since their founding, they have sold arms to nearly every country, army, or private military company in history. Their reputation for reliable, high quality, easy to use products is well deserved, and their weapons can be found nearly anywhere in the galaxy. Acquired in 2290 by Zavodskoi Interstellar after a series of poor financial decisions following a burst of growth in the First Interstellar War, they have continued to adapt to and lead rapid developments of new types of weapons. Kumar Arms, due to investments made by Zavodskoi Interstellar, has diversified itself into more fields during the 2400s. They produce much of the Sol Alliance's military vehicles and weaponry, ranging from humble battle rifles and shotguns to the main batteries of naval vessels.

“Have confidence in Confiance.”

Confiance Technologies (ConTec) is a subsidiary of Zavodskoi Interstellar, founded on Luna in 2427. They remain a successful company focusing on AI and synthetic component manufacturing. ConTec has been divided into two branches following the creation of Zavodskoi Interstellar. ConTec's military wing (Branch A) produces a great amount of the Sol Alliance Navy's on-board AIs and combat-grade robotics, and does not operate outside of Solarian space by Zavodskoi Interstellar due to the sensitive data they handle. This includes the Republic of Biesel. ConTec's commercial wing (Branch B) produces non-military equipment, and can be found everywhere outside of Dominian space.

While perhaps not being the most innovative or highly profitable corporation, Confiance Technologies was founded as part of an effort to diversify Zavodskoi Interstellar’ profit base into more stable fields. It is not uncommon to find circuits, diagrams, wires, and various parts produced by them in robotics and synthetics across the Sol Alliance. In recent years ConTec has diversified itself into Zavodskoi's military industry, and has designed personal AIs for use with Zavodskoi hardsuits and weaponry.

Zavodskoi Interstellar finds itself mostly being a leech off of other megacorporations in terms of workforce. Workers with Zavodskoi usually flocked to the company to exploit its high pay - a byproduct of its ever-dwindling niche in the corporate game slowly siphoning its employees to the other, more prominent corporations. However, perfecting weapons of war is a task which will never truly be finished. In this day and age, Zavodskoi pioneers where others do not by developing and manufacturing the highest-quality niche-function firearms, or just the biggest and baddest weapons they can muster. The extent of this research dominates every echelon of the corporation leading to the unified pursuit of maximizing the efficiency of its stock, rather than trying to cover the widest range possible.

While Zavodskoi Interstellar is undoubtedly on a decline due to its pursuit of quality, its workforce - and contractors - are highly prized for how trustworthy, effective, and polite they end up being.

Zavodskoi Interstellar rarely works alongside Zeng-Hu contractors - intentionally so. The two corporations frequently butt heads after Zeng-Hu Pharmaceuticals left Zavodskoi genetics research in the dust, with the relation between the two sour at best. This echoes down to the lowest ranks, as even the common worker can find themselves cheered on to beat the opposition. This isn’t an excuse to get fired by trashing your coworker.

Founded in 2259 by Yefim Dementyev, Necropolis Industries grew on the back of an innovative invention: the combat-capable voidsuit. Although initially cumbersome, heavy, and expensive, demand for more polished them to the form we now know. Their growth only skyrocketed further with the outbreak of the First Interstellar War, where demand for space-capable armor was at an all time high. After the end of the war, and shortly after acquiring Kumar Arms, Necropolis diversified heavily into gene modification technology and biological experimentation. During this period they prominently associated with the Empire of Dominia’s efforts in this area, rather than the Jargon Federation like their main competitor: Zeng-Hu Pharmaceuticals. They were briefly famed for skill and quality of outcome in the area of gene therapy, biological limb replacement, and DNA manipulation. Wise financial decisions have ensured their dominance of arms procurement all across the Orion Spur, especially in the Sol Alliance. Many unique weapons developments have fueled their continued hold on the weapons market, with development of tools such as the energy machete, pulse rifles, and sonic weaponry. Some detractors claim that in recent years they have delved secretly into bio-weaponry and atmospheric weapons, but this has always been denied by Zavodskoi Interstellar representatives.

Unfortunately for Necropolis, skrellian investments in Zeng-Hu Pharmaceuticals made its own genetic advances rapidly irrelevant and the company soon realized that their genetics partner - the Empire of Dominia - was nowhere near the level of the Jargon Federation. As a result Necropolis Industries rebranded itself as Zavodskoi Interstellar following massive cuts to its genetics division and a desire to move itself away from the less-than-stellar reputation of Necropolis, which had come to have its brand name associated with rumors of unethical biological experiments and potential terrorist financing. Rather than pursue further genetics work, Zavodskoi Interstellar opted to pursue what it knew how to do better than any other megacorporation in the Orion Spur: military equipment. The Zavodskoi Interstellar of today remains primarily centered upon three pillars. The largest is its classical military-industrial complex, and a massive amount of humanity's military equipment, ranging from infantry small arms to combat hardsuits to vehicles and much more, are today produced by it or one of its subsidiaries. The military-industrial pillar has even branched into robotics, thanks to Confiance Technologies, a more recent subsidiary of Zavodskoi Interstellar. Its second pillar, as a result of its genetics research, is its robust biotech research wing - Necropolis medical staff are a common sight throughout the Orion Spur, particularly in the Sol Alliance's military.

A third, less public, pillar of Zavodskoi Interstellar is its private security force. These officers go wherever Zavodskoi employees go, and are known throughout the Orion Spur for their professionalism. According to company representatives Zavodskoi's security wing is one of the most competitive in the Orion Spur, and are trained longer than any other megacorporation's security force. A recent turnover in the highest ranks of the security force following the rebranding of Necropolis to Zavodskoi has caused some suspicion among third-party observers, but no information has been released on this by Zavodskoi representatives.

Newly implemented and with some in the company opposed to their presence, Zavodskoi positronics face systemic fragility within Zavodskoi Interstellar. In an effort to employ and contract out the best representation for the company, Zavodskoi will routinely memory wipe, retool, or outright scrap and sell their IPCs for workplace accidents, failure to execute an order, or under performance. This process has been largely seen as a lighter version of the Burzian Method. This authority does not extend to Zavodskoi Interstellar corporate liaisons although they are encouraged to check in with their positronic contractor personnel from time to time. Therefore, Zavodskoi positronic contractors are often those struggling to maintain a positive evaluation or saved from the scrapyard all together.

It is common practice for research and security Zavodskoi Interstellar IPCs to adopt the prefix Z.I. followed by their designation.