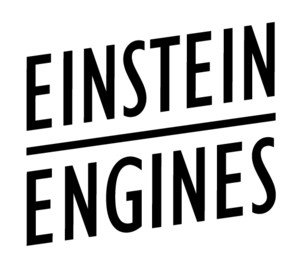 Lead by our history, leading our future.

This is a main page for a non-playable corporation.

Einstein Engines is a trans-stellar corporation founded in the mid 2100’s in Sol. They revolutionized warp travel technology and helped humanity expand before the discovery of Phoron and Bluespace drives.

Einstein Engines is the sole monopolized power over warp technology. Having long held the throne of the original megacorporation, their reputation is known on a galactic scale for being virtually everywhere through warp engines and beyond. In the Frontier, old Einstein tech is a common sight, and every living being can attribute their lives to hinging on it in some way, shape or form.

Ultimately, Einstein Engines is the solemn major rival to NanoTrasen. Its exploitation and ownership of the rights to warp technology has secured its place, and its reign is sure to be long-lasting.

A genius researcher and cutthroat businesswoman, Dr. Lopez-Zhang is respected throughout Einstein Engines as the woman that saved the oldest megacorporation in the Orion Spur from utter destruction by radically restructuring the company in the mid-2400s. Under Lopez-Zhang’s steady leadership, Einstein has set about recovering much of its market share. Presently, it stands able to challenge NanoTrasen in several engineering fields and has become a major threat to Hephaestus Industries. Dr. Lopez-Zhang and Titanius Aeson are known to have an infamously sour relationship.

Motto: Lead by our history, leading our future.

Einstein Engines is run by the Board of Directors, lead by Chairman and Chief Executive Officer Noella Lopez-Zhang. The Board of Directors oversee the general function of the entire corporation, with each director given additional regional boards to manage.

With a heavy presence in Sol, Einstein Engines has spread throughout human space. Here are the locations of their primary and largest branches.

Harmony City, Luna, Sol: The headquarters of Einstein Engines has sat comfortably in Harmony City for years. A corporate-funded apartment complex sits directly next to the headquarters, offering affordable and surprisingly luxurious living for employees.

Hong Kong, China, Earth, Sol: The Hong Kong branch stands out among the many nightlife activities and residential areas found in most of southern China. The branch is also where a majority of consultations and meetings with Taipei Engineering Industrial occur.

Mendell City, Biesel, Tau Ceti: The Mendell City branch can be found in the Zhengfu District and is considered the largest non-Sol branch of Einstein Engines. Though not as grand as the NanoTrasen building nearby, more than a few have gawked at the immense skyscraper.

"Promoting the general welfare and logistics of future technology."

Taipei Engineering Industrial (TEI) is a small subsidiary of Einstein Engines, founded in Taipei, Earth in April of 2418. They focus their efforts on the improvement of existing warp technologies and their applications in science, engineering, and industry.

Despite only minor financial backing and resources, Taipei Engineering Industrial focused their initial efforts on improving the concept of independent Bluespace drives. These drives would give conceptually instantaneous, independent jumps that would not need to rely on the existing mass-transit gates. TEI wished to give amplified mobility and accessibility to Sol Alliance Navy vessels as to allow improved reconnaissance capabilities. However, when testing a new warp drive with altered parameters on an unmanned drone, it was discovered that the test unit had been transported through an expansive extradimensional tunnel system. This tunnel seemed to feature physics unlike those seen in common space. The events on the fourth of February, 2452 would become known as the “Hyperspace Incident”.

Though no actual, solid entities were within these "hyperspatial subspace clusters" of presumed matter, the drone found it difficult to pass through seemingly transparent space. Upon the drone navigating its surroundings, it found itself within an amalgamation of strange, constantly moving polygon-shaped obstructions. The solid "objects" within the anomaly were outlined within borders making it impossible to pass through, not unlike colliding into a realspace wall. Interestingly, while the drone was initially approaching the cluster via the hyperspace tunnel when it initially made the jump, it appeared to be a third-dimensional spherical object. Upon entering the cluster, the appearance and shape of visible anomalies varied from 2D, 3D and 4D, there was little apparent consistency. Some scientists blamed the visual sensors of the discovery drone being incapable of seeing that of what the human eye is adjusted to, while others claimed it was a revelation of varying physics between dimensions, that of realspace with 3 spatial dimensions, and that of hyperspace with a varying spatial dimension count. Whether this revelation is true or not is still a matter for debate, as no human as of yet has volunteered for an expedition into a hyperspace jump.

Most notably, however, is that while the drone warped approximately three hundred million kilometers from its position in sters and hyperspatial 'highways' before it actually dropped into realspace again. This led the monitoring research team to believe that the concept of hyperspatial time was radically different than from that from realspace.

"Delivering the right product to the right customer."

Terraneus Diagnostics (TD) is a subsidiary of Einstein Engines, founded in Bremen, Germany, Earth, in September 2429. They specialize in large problem-solving AIs as well as development of new types of synthetic combat chassis and programming.

Sol: The central manifold is in orbit of Jupiter.

Tau Ceti: The third manifold is in orbit of Biesel.

Terraneus Diagnostics started as a small development program with the advent of Artificial Intelligences, and with the invention of a specialized intelligence that could rapidly solve large computational problems, the company was soon founded. Their rapid growth is thanks to their continuous innovation in this area, culminating within a decade with the construction of SUNSHINE, possibly the single largest and most complex intelligence in Alliance space. With the construction of its three Manifold facilities, they have spread their influence and contract-taking across the Sol Alliance, the Frontier Alliance, and the Republic of Biesel. Though explicitly stated to not be for combat purposes, many of their computing intelligences can be found on large Sol Navy vessels.

Though previously equally as well known for their pioneering efforts in the design and programming of combat chassis and synethics, they have recently become less willing to publicly associate with this area of development, especially after the invasion of Tau Ceti. Many rumors abound as to who the various bidders for a recently offered secret contract are, ranging from the Republic of Biesel, to private military companies, though Terraneus Diagnostics has denied that the contract was for combat-related development and production.

Einstein Engines originated as a conglomerate of various aerospace companies who shared a joint research project for extrastellar travel. As the project came into fruition, it was realized it would have immense consequences for the human race. In the year 2130, a sustained, stable warp interface was formed. This development served to catapult the conglomerate to be a dominating economic power across Sol. Their warp technology revolutionized space travel and lead to the construction of micro-g orbital industrial stations around the equator.

This boom in industrial capabilities lead to the great expansion of humanity across space. Warp-enabled probes traveled to nearby systems, finding habitable worlds scattered across space. The power of Einstein Engines continued to grow throughout the following centuries, eclipsing other interstellar corporations; however, this expansion was not to last.

In 2417, only four short years after the discovery of the Skrell, a relatively young corporation, Nanotrasen, discovered a previously unknown chemical, dubbed Phoron. Phoron was discovered to have an incredible energy density, far beyond that of conventional fusion or fission. This energy source, along with the advent of the Skrell's experimental, though superior, Bluespace drives burst the unending growth bubble of Einstein Engines. As Nanotrasen grew into the present day superpower it is, Einstein Engines fell inwards. Major restructuring was done to save the company, leading to its modern form.

Today, Einstein Engines still holds a significant powerbase despite the losses in the first half of the 25th century. Continuing to serve it's market, Einstein Engines produces many important spaceship components, and continues to contend with Nanotrasen over the efficiency of their different marques of Bluespace engine. The two giants awkwardly co-exist in human space, with multiple copyright and trademark lawsuits bouncing between them on a monthly basis.