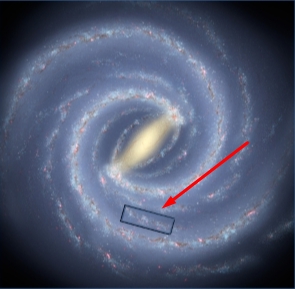 An indicator for where the Orion Spur is in the Milky Way.

This is a page for the regional descriptors and starmap of the Orion Spur, the setting of the Aurora server's universe.

At the very bottom of this page is a fully interactive map of the region that will be updated as time goes on. To access it, hit expand on the right of its collapsible box.

The Orion Spur is the center of all things familiar in the galaxy, yet is largely unexplored by even the most noteworthy Skrell and Human expeditions. It represents a tiny portion of a much larger galaxy that is indicative of a thriving and lush interstellar community. At least, the hope is that whatever lay beyond could be considered such.

The Orion Spur is traditionally charted in a horizontal two-dimensional fashion imposed over the Milky Way. This is due to the fact that the density of noteworthy locations is rather thin and spread out evenly across its internal regions. This is not to say the galaxy is not three dimensional - however for your ease of comprehension, it will not be treated as such.

Details as to the background of the Orion Spur can be found here. This region of space (or perhaps all of space if this is any indicator) is particularly anomalous, and some of its anomalies can be detailed on the Deep Space page.

Details on the regions of, and factions within the Orion Spur can be found below.

The Alliance of Sovereign Solarian Nations is the single largest political entity in known space. Nearly half of Humanity can trace their home to here.

Centered in the heart of the Sol Alliance and largely safe from any common galactic dangers, the Jewel Worlds are the pride of Humanity to some, and a massive bane to others. Here is where the first colonization from Humanity arose, and where the Interstellar War was powered, producing an extremely polarized mindset against it amongst the Colonial territories. Nearly sixty billion Humans can be found here with an undetermined amount of aliens.

Among the Jewel Worlds are the entirety of the Sol star system, Epsilon Eridani, New Hai Phong, and Silversun.

The Jewel Worlds possess two bluespace gates, one from Sol to Konyang - which is in the process of being dismantled - and another from Epsilon Eridani to Qerrbalak.

A massive region of neutral space established over two hundred years ago during the time after the Interstellar War, the “ANZ” is a testament to the Coalition’s fear. Both the Alliance and Coalition have long since built their borders around this demilitarized zone, taking great care to not officially overstep their boundaries and create hostilities. However, it is very clear the Alliance itself has long cared little for this zone, regularly “accidentally” pushing survey fleets into its boundaries. The ANZ entirely encompasses the Weeping Stars region.

As of the KING OF THE WORLD arc's finale in late 2462, the ANZ no longer exists.

The Coalition of Colonies is the second largest Human entity in known space, regarded highly in the Frontier as a bastion of hope against the burgeoning Solarian Alliance. Over 85 billion people reside across the entire Coalition, with all relatively evenly spread out.

The focal point of the Coalition, home to the Xanu Prime Free League and Himeo - both powerhouses in their own regard. It spans roughly 50 square lightyears of space and is known for its countless mineral-rich systems.

Not only a large memorial to the Interstellar War, the region known grimly as the Weeping Stars is perhaps the sole place the war occurred. Before the modern Coalition came to be, the war was fought over several lightyears of territory as the conflict raged on. Nearly 800 square lightyears saw the worst of the battles, leading the region to be later referred to after the tears caused by the bloodshed.

Among the greatest standing acts of defiance against the Solarian Alliance in the modern day, Rebel’s Reach is a portion of the Frontier dotted with Coalition trade posts and secure travel routes. It is the most common route to and from the Coalition due to its position outside of the former Neutral Zone permitting safe travel under the umbrella of either side’s defense forces. Now that the ANZ no longer exists, this route is commonly trafficked due to leftover defense installations still remaining staffed and providing safe coverage all the same.

Orepit is located in Rebel’s Reach.

The Human Frontier consists of any amount of open space that is charted but is left without any major galactic sovereignty. This is seen as lawless, wild space to some while untold billions call it home. Colonial territories such as Elyra or Dominia are the few bastions of solid civilization in this chaotic place.

The Clash is the farthest point of the Human Frontier and the closest settlement of Human territories to Nralakk Federation space, with some independent factions practically floating on the border of it.

Arusha is a truly alien sector within the Orion Spur, known for its great many barely-habitable planets populated by xenoflora that is like nothing ever seen elsewhere in charted space. Presumably anomalous in nature or spread by a now long-gone civilization, these Arushan plant species are widely famous for their odd appearance, high luminescence and very specific compatible habitats. The products of harvesting Arushan plants are seen as delicacies across charted space.

The Badlands are home to some of the Orion Spur’s most savage flora and fauna, a phenomenon that attracts only the wildest and wisest of the system’s inhabitants - xenobiologists, weapon scientists, there’s even a market for mercenaries, in the hunting of the particularly large and lethal creatures. Of course, there are also those looking to make a life for themselves, but natives aren’t known to treat settlements kindly. 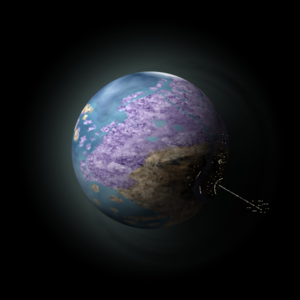 Persepolis, capital of Elyra and a major political player in the Badlands.

The majority of the People's Republic of Adhomai and the Republic of Elyra’s space finds itselves positioned in the Badlands. As well, the entire Izweski Hegemony and a small portion of the Empire of Dominia.

The Badlands are accessible by a set of bluespace gates leading to and from Tau Ceti and Persepolis/New Ankara.

Nestled in the narrow Frontier space between the Republic of Elyra and the former borders of the Solarian Alliance is Valley Hale, a large region filled with a large amount of old, dying stars and impassable nebulae. Due to close proximity to patrols on either end of this space, it isn’t frequented much by criminal elements and is one of the safer parts of the known Frontier. After 2462, the Republic of Elyra has occupied the majority of Valley Hale, now bordering the Republic of Biesel.

A large region of heavily contested space, mostly avoided, barring those with lofty goals or sinister dealings. It is populated by all sorts of outcasts and outlaws, but notably unathi pirates and exiles, Dominian edict breakers and even the scarce eccentric band of skrell are all known to seek refuge here. Though piratry is common, plenty of stubborn colonies of all backgrounds make stakes here.

An astrological curiosity, Light’s Edge is the end of colonized space in its direction. The area beyond it is devoid of major stars, and ships that pass near it often report feelings of unease amongst the crew. Settlements are extremely rare in Light’s Edge, and those that are present have a nasty habit of tearing themselves apart internally. 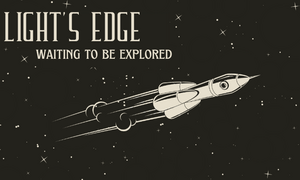 Light's Edge - Waiting to be Explored.

A large, mostly uncontrolled area, the Crosk Plains represent the furthest stretches of human colonization - stretching up against the skrellian border. The Coalition of Colonies, Nralakk Federation, and Solarian Alliance are currently attempting to expand their influence into this region with varying degrees of success.

The Nralakk Federation is an authoritarian, centralized union of star systems. Although humans have fractured heavily in their expansion, Skrell have remained in a largely singular government through strict reinforcement of education, travel, technology and research, as well as laws, working as a democratic meritocracy with a planned economy. Social media is maintained by the Federation government, who gag unacceptable discussions or thoughts and instead encourage people to be like the Idols that they reward with credits, high quality housing, and fine living.

When Skrell finally ventured beyond their solar system, they did so with great enthusiasm, scouting out the perfect worlds to colonize. In the 1600's, the first waves of colony ships expanded beyond the Home System into these explored systems, building up highly populous planets with well developed infrastructure and healthy trade routes. With the Federation's strict colonist-recruitment systems and idealistic view on exploration, there was only a small amount of crime in this golden age of colonialism.

Qerrbalak and the Skrell Homeworlds are noteworthy First Wave systems.

The First Wave Systems are accessible by a set of bluespace gates leading to and from Epsilon Eridani and Qerrbalak.

As the First Wave Systems grew, smaller settlements sprouted to support them. This Second Wave of colonization efforts saw the spontaneous rise of many colonies with single purposes, like mining outposts and farming operations. Some of these systems would go on to becoming thriving, if not modest, communities of varying levels of self reliance, often with highly specialized citizens.

The Traverse is the ever-expanding frontier of Skrell space, meant to be the ‘lattice’ upon which future centralized Federation territories would be built upon. Settlements here can vary wildly, but it is common that the colonists consist mostly of carefully chosen civilians, professionals who will keep the colony running smoothly, and their families. Depending on the proximity of the systems; they may have heavy military and naval patrol, meant to protect colonists from piracy and other dangers, however the further one strays from the core the weaker the Federation's grip gets.

A bulk of the Traverse’ space is known to the Solarian Alliance as “the Median,” originally set in stone as a barrier between the growing Alliance and the Nralakk Federation after first contact. Since then, it has evolved to lose much meaning to its name, seeing as both sides of the region may travel freely within.

The Starmap; be sure to expand and pan your view! ===> 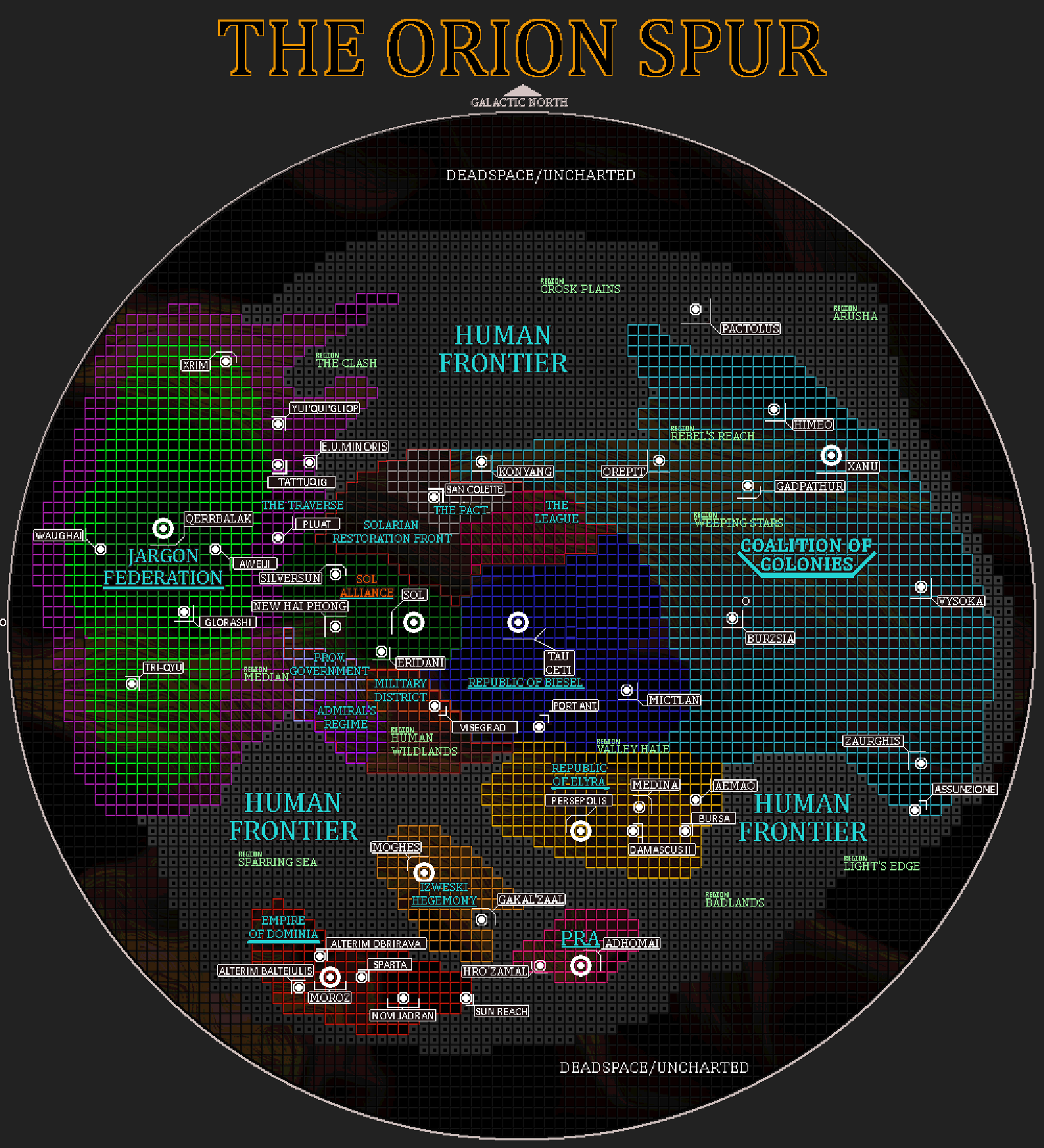