Qerrbalak has only one moon, Qerr'Malic. It has a surface area of roughly 17 million square kilometres, with an abundant amount of minerals found both close to the surface and deeper within its mantle. Akin to most moons, Qerr'Malic is without liquid water and an atmosphere - however, one notable difference is the effect it has on the tidal activity on the Homeworld. Its elliptical orbit generally comes closest to Qerrbalak during Xepus-qog, which results in most of the coastal regions becoming submerged by the various oceans down below.

Qerr'Malic saw itself colonised in 1109 BCE - by a mere hundred Skrell, outfitted with prefabricated kits that would be utilized to expand across the surface of Qerrbalak's moon. Whilst initially the kits allowed for rapid colonisation, the lack of numbers and inability to expand severely limited the growth of the various colonies; and as the years dragged on, they faced difficulties in grappling methods to develop self-sufficiency, with added stress on the Skrell come up with techniques to protect the fledgeling settlements from incoming meteorites.

A driving factor for the colonisation of Qerr'Malic was the due to strong environmental laws on Qerrbalak that meant that what mineral wealth was available was beginning to run out. The Skrell faced a mineral crisis that could only be alleviated by turning to the stars - their first stop being their moon. As mining across Qerr'Malic took off, tensions began to rise as the Alliance of three continued demanding increased quotas from the colonies as well as a disconnected Nlom-field; which resulted in a rise of the frequency, and intensity, of actions undertaken by the Consultant Agencies.

During the 2230s CE, Qerr'Malic became a host to over a million Dionae, after the discovery of the species within Kelo'Hen. Settled by the Skrell, who then introduced the species into their society, the Dionae now have come to know the moon as their home - where the species inhabits a sizable, autonomous territory that remains under constant surveillance by the Jargon Federation through satellites that orbit Qerr'Malic. 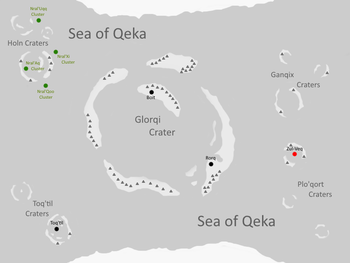 A map of Qerr'Malic, depicting the locations of the various cities beneath its surface.

Maintaining no atmosphere to speak of, the moon is considered barren by the scientific community within the greater Orion Spur; resulting in most, if not all, activities that are carried out beneath its surface to require Extra-Vehicular Activity apparel with lead linings to protect those from the composition of the moon - which is primarily abundant in radioactive metals such as Uranium, Prometheum and Neptunium.

Qerr'Malic now hosts one of the largest shipyards across the entirety of the Jargon Federation; utilizing the resources mined on the moon in the creation of power-intensive warpdrives, engines and various other technologies that are essential for a functioning spacecraft. The proximity to the minerals extracted from the moon assist in cutting freighting costs, but also halving the time it takes to manufacture anything.

Early on in the colonisation of Qerr'Malic, it was decided that the Skrell would do their utter best to preserve the surface and allow for future generations to gaze upon it like the Skrell had done for millennia before. The policy was strictly enforced, and resulted in the creation of the 'Second Surface' - a massive series of interconnected cities through various tunnels across the moon. Cities expand deep into the mantle, with various levels dedicated to diverse activities; mostly aimed to assist Skrell visiting during spouts of mental distress.

A highly efficient, and punctual means of travel on Qerr'Malic, the Hyper-Rail belts beneath the surface in tunnels constructed by Dionae and C'thur. Whilst primarily used to transport Skrell the Hyper-Rail Network has also been known to freight cargo between the cities as they travel around the moon, stopping at various points of interest - mostly being manufacturing plants and mines.

Whilst the quality of life is relatively high for Skrell on Qerr'Malic, it normally isn't the same for the C'thur and Dionae populations. Usually signed into contracts that involve construction, and mining, they are expected to reach quotas set by the Jargon Federation during the year - oftentimes those that do not meet the quotas are labelled as 'deviants' and have their contracts broken, resulting in a probationary period in which they are not allowed to leave the Federation.

After the discovery of the Dionae, they were towed back to Nralakk - where they remain today. Granted autonomous regions across Qerr'Malic, alongside facilities that allow for the species to propagate, the Dionae have begun to recognise the moon as their Home; the bulk of which remain to assist in mining and construction efforts, however those that venture beyond are welcomed with open arms across the Jargon Federation among other places in the Orion Spur.