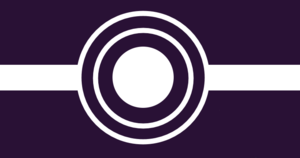 Aweiji, is the first Skrell Colony established outside of Nralakk. Whilst initially much rocker and drier than Homeworld, in 810 BCE the Skrell initiated a vast terraforming program to convert the planet into an Eden in the Homeworld's own image. The very first colonists settled on their new home in 700 BCE, in a plain located between vast mountain ranges, which soon become the bustling city of Tresja. It was eventually selected for the location of the largest political meeting in the Jargon Federation’s history, the renowned Tresja Agreement.

Discovered in 1171 BCE, Aweiji was quickly identified as a possible colony site for the Skrell—however, due to its composition, rigorous terraforming efforts were required before any colonisation could begin. Terraforming equipment arrived in 810 BCE, and quickly the planet was converted into an Eden comparable to even Homeworld in beauty. Soon, the planet was assigned priority and construction began on a colonisation spacecraft: the Startrekker.

Eventually colonised in 700 BCE, colonists initially suffered from slight Nlom withdrawal—but they persevered and eventually founded Aweiji’s first city, Tresja. Centuries passed, and the implementation of a Nlom Beacon relieved many settlers' Nlom withdrawals. With rising tensions now boiling over, many Aweijiin rejected the nascent First Federation's control, citing that they could reasonably support themselves. The two entities appeared to be in a stalemate, neither side willing to make major concessions to the other, culminating in Aweiji's settlers disabling their Nlom Beacon. This prompted the Jargon Federation to immediately address their concerns, with dozens of representatives sent to Aweiji to begin talks to end the colonial conflict.

Aweiji was not spared from Glorsh-Omega and its tyrannical rule. It pillaged Aweiji, utilizing Orbital Spaceport XY-558 to distribute extracted resources across the Federation, with much of it going towards the manufacture of additional surveillance probes. After such a long period of close control by Glorsh-Omega, its disappearance plunged Aweiji into a dark age which the settlers were completely unprepared for.

Isolation from the rest of Skrell Society proved to be harder than initially thought, with the colonists struggling to rebuild. After years passing without much progress, they formed their own makeshift Grand Council that aimed to organise and empower them, ensuring Aweijiin across the planet would prosper. When the Jargon Federation re-established communications with them they were initially hesitant, but eventually relented and hosted one of the most important treaties to be signed, the Tresja Agreement. The signing solidified their introduction back into the Jargon Federation. 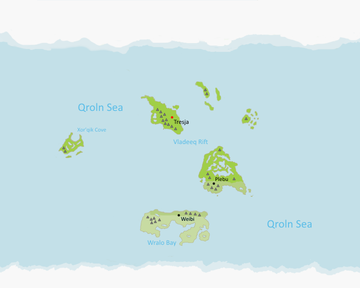 A marked map of Aweiji, depicting the diverse ecosystems across the planet.

Aweiji was far too hot and arid for Skrell to survive comfortably in, with temperatures often reaching as high as 60°C; likewise, the lack of any large bodies of water meant humidity was practically nonexistent. It was suspected any initial colonists would suffer health issues related to these circumstances, and therefore colonisation efforts were postponed until the planet had been terraformed. Through the use of sulphur aerosol dispersion, and the drawing of ice comets, Aweiji was soon moulded to fit Skrellian physiology. While the terraforming efforts took just under half a century, it was considered a great investment as flora and fauna from Qerrbalak were gradually introduced, transforming the planet into a beautiful landscape that reminded the Skrell of their home.

Acquiring the title of the "industrial titan of the Federation, upon which it was built," Aweiji embodies the hardworking spirits instilled across its surface. Aweijiin settlers put great importance on frugality, diligence, and respect for Quya as essentials for economic efficiency and productivity; aided by the authoritarian political system that shaped its population to be relatively more obedient and accepting of authority, these traits made the populace highly efficient at manufactu­ring work. For this reason colonists from Aweiji tend to be highly motivated and upwardly-mobile in the Federation, soaring through its ranks. They also believe the most important thing one can do for their children is to arm them with the skills, work habits, and self-confidence to ensure they are useful to the Federation, as well as affirming these same values in them. This has lead to an unbroken cycle of repetitive behaviour in which Quya will go above and beyond to ensure the best possible future for their children. Those on Aweiji believe that their Quya comes first, and the rest will follow. The quality of life is especially high on Aweiji which is aided by its importance to the Federation as the various manufacturing industries across the planet turn raw materials into much-needed supplies that are then transported throughout the Federation. Most Skrell are employed in various state enterprises, offering incentives to draw them in—prompting a growing stigma against private ventures, often referred to as 'sellouts' and 'greedy' for wishing to accrue vast amounts of wealth through exploitation of naive Skrell.

Due to the period in which it was colonised, Aweiji maintains a strong presence of Qeblak; with teachings similar to those found across the rest of the Jargon Federation. Whilst religious freedom is allowed, Qeblak is supported and pushed to the forefront of the planet's politics—aided by the numerous constellations that have been designated by various Star Chanters over its existence.

Aweiji also maintains the largest Qeblak Observatory Dome in the entire Jargon Federation, containing hundreds of artefacts crucial to the Skrell that range from ancient weaponry to the first designs of the Sraso. The presence of such influential articles has led to the Wonqio Monastery becoming a common pilgrimage site for many to gaze upon its inner workings, as well as the artwork depicted throughout its halls.

There are a few constellations that can be seen in the night sky of Aweiji; while declared as minor by the greater Qeblak population of the Federation, it is considered to those hailing from the planet to be some of the most important. Outlined and spread by Starkeepers throughout Aweiji's existence, these constellations have pushed the residents of Aweiji to have an inclination towards self-sufficiency and to prioritise self-reflection over outward expansion. When Glorsh-Omega disappeared, this became especially prominent: the settlement had to find themselves in the sea of isolation and forge themselves a new destiny in the hopes of recontacting their homeworld, Qerrbalak—or even to move past needing its help. 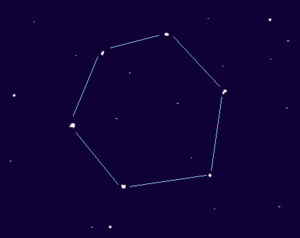 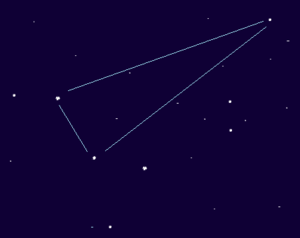 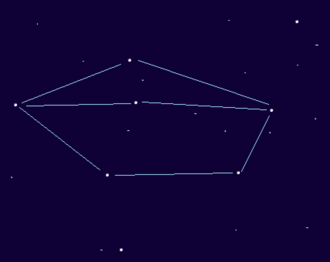