Being the birthplace of humanity, the Sol System and holding over 22 billion inhabitants, the Sol System is the bustling core of the Sol Alliance. It holds the oldest human colonies dating back to the 22nd century. It is considered the metropolis of human space and holds the Core Worlds. The venerable age of the human settlements means many of them have gone through many changes and shifts throughout the ages. Despite holding the bulk of the Alliances' shrinking middle class, extreme wealth disparities exist, which have proven to be a constant source of contention.

Sol also holds the official capital of the Sol Alliance, Unity Station, in orbit of Earth.

The star Sol is a stable G-class main-sequence yellow dwarf star classified in the spectral class of G2. It is almost 4.5 billion years old and has eight planets in orbit around it as well as other bodies.

Mercury is the nearest planet in orbit around Sol. It completes one full revolution around its parent star every 88 standard days, and has a day that is a little more than 58.6 standard days long. It is a small terrestrial planet, being smaller than Earth’s moon. It’s surface is pitted with craters from eons of meteor impacts. The planet has a very thin exosphere composed of mainly oxygen, though it it much too thin to sustain any form of life. Mercury experiences wild variation in terms of surface temperature, with its daytime side reaching temperatures of 430 °C, and the night side dropping to the range of -180 °C. The planet faces constant bombardment from small meteors and solar wind, with no atmosphere thick enough to prevent it. No attempts were ever made to colonize the planet due to its utter lack of resources and extreme conditions, but manned scientific expeditions are rare. Civilian travel is not advised.

The surface of Venus is uninhabitable to humans, yet the population thrives.
Venus is the second terrestrial planet in the Sol system. A Venusian year lasts 225 standard days, while a Venusian day is longer, at 243 standard days. Venus spins retrograde when compared to the other planets in the Sol system, causing the sun to rise in the west and set in the east in its sky. Venus has an extremely thick and toxic atmosphere while its surface is an incredibly hostile environment.

Despite this, the upper atmosphere is known to be calm. Most colonies on Venus take either the form of floating aerostats, or bulky habitation complexes on the surface. While the temperature here is still a blistering 75C, some of the sealed, floating colonies tend to specialize in using the atmosphere's massive concentration of CO2 to cultivate extremely bountiful hydroponic farms. 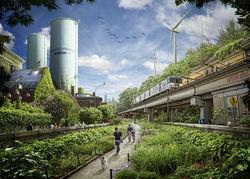 Earth is the homeworld of humanity. Despite several upheavals, it has made a dramatic recovery.

Earth is the third planet out from Sol. Earth has since regained its status as the jewel of humanity; it's central and arguably most important world. Earth is a Garden world, harboring millions of unique species of flora and fauna. It possesses extremely diverse ecosystems, with huge deserts, sprawling tundra, massive mountain ranges, rolling grasslands, and thick swaths of tropical rain forest. 71% of the Earth’s surface is covered in salt water while massive lakes of fresh water are found within continental areas. Humanity's home world is densely inhabited and every corner of the planet has a long, well-recorded history and culture.

Earth is home to a stable 19 billion humans and a small non-human population. The planet suffers from moderate space debris in high-orbit, a consequence of centuries of space travel. The Alliance maintains a significant naval presence around the planet.

Earth has one moon, Luna, which has developed into a fully fledged state of the Sol Alliance. 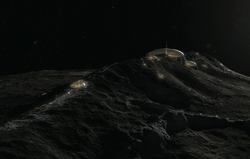 A photograph of Harmony City and the Harmony Biodome. Luna's subterranean and domed cities are connected by environmentally sealed subways.

Luna is the sole moon of Earth. It is tidally locked to its parent and makes a complete revolution every 28 standard days. It formed when a rogue planetoid collided with Earth during the early stages of its formation. The moon came together from the resultant orbital debris. Luna was the first target of spacefaring humans as they pierced the outer layers of the atmosphere. It was largely ignored until the age of FTL travel and colonization, when small colonies were established, mostly as refueling and launching posts for re-entry craft.

Luna is something of a mishmash of human society. It's population is roughly split between descendants of refugees and immigrants from Earth, and 'native' Lunans who settled in their subterranean cities over a century ago.

Luna, being directly administered by the Alliance, has an elected governor. 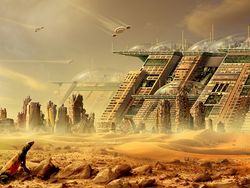 Most of Mars' surviving residents inhabit sprawling megacities containing up to half a billion individuals.

Mars is the fourth planet out from Sol. A Martian day is only slightly longer than a standard day at 25 standard hours, but the Martian year is 687 standard days long. It is the outermost terrestrial planet in the Sol system. It is known as the Red Planet, because the iron-rich dust that covers most of the planet’s surface gives it a reddish tinge that was visible to the naked eyes of astronomers on Earth in ancient times. Mars had a thin atmosphere, but centuries of terraforming efforts have made it breathable.

Mars was a target of one of the first bodies colonized by humanity. Its population swelled in the early days of the Second Space Age.

Mars has suffered two catastrophes while colonized: the abrupt failure of its terraforming infrastructure and widespread damage as a result of the First Interstellar War, when most of the planet attempted to secede from the Alliance. Mars is home to millions of descendants of refugees, cramped in centuries old bio domes or ruins. Yet Mars has proved resilient and today is one of the most populated worlds in human space with a highly advanced economy. Areas of the planet have been fully terraformed, allowing for massive, open air cities. These tend to be near the coastal areas.

The Violet Dawn catastrophe of 2462 and civil unrest in the weeks leading up to the catastrophe has seen Mars reduced to a shadow of its former self due to massive phoron fires that raged across the southern half of the planet and the utter collapse of government authority over the planet. Millions have fled the planet and dozens of arcologies have been destroyed, leaving the future of the planet uncertain at best and apocalyptic at worst.

The planetary capital of Mars is Unified Kunlun, located within the Provisional Government of Mars' zone of control, but a majority of the planet has fallen into anarchy.

The Asteroid Belt is an area around Sol where thousands of rocky bodies, too small to be called planets or even dwarf planets, orbit. The zone encompasses an area between 2.2 AU and 3.2 AU away from Sol. The asteroids in the belt are rich in precious and semi-precious metals, hydrogen and water. The density of asteroids in the zone is relatively low, which was an important factor in allowing asteroid mining companies to establish footholds. The oldest and largest of these asteroid mining companies is the Beltway Mining Company, which has claimed the rights to mine most of the Asteroid Belt. Other fledgeling companies have often been pushed out through strategic economic maneuvers, intimidation, and sometimes force. Beltway has a main base located on the planetoid Ceres, the largest body in the asteroid belt. Over the years, the planetoid has been hollowed out by intensive mining operations, and now serves as a massive complex that the rest of their operations are based out of. Roughly 7 million people reside in the asteroid belt.

Jupiter is the fifth planet out from Sol. It is the largest gas giant in the system and is actually two times larger than all the other planets of the Solar system combined. It is composed of Helium and Hydrogen in similar ratios as Sol itself, suggesting that Jupiter may have been on the road to becoming a dwarf star, but never achieved the mass to ignite. A Jovian day lasts approximately 10 standard hours, while a Jovian year is almost 11.9 standard years long. Jupiter is known for the multicolored bands and massive storms that are visible on the top of the planet’s atmosphere. The most well-known feature of Jupiter is its Great Red Spot, a massive hurricane many times the size of Earth that has been raging for centuries. Jupiter has more than 67 moons in total, though only the Galilean moons (Europa, Ganymede, Io, Callisto) are home to outposts that serve more as tourist destinations than actual military installations. Settlements on the gas giant are giant floating cities that grace the upper atmosphere, held aloft by massive, reinforced balloons. Jupiter is the second largest source of tourism for the Solar system.

The combined population is 1.4 million people.

Saturn is the sixth planet of Sol, and the second largest gas giant in the system. It is known for the spectacular systems of rings that encircle the planet. It is the second largest gas giant in the system, with a composition similar to Jupiter. A day on Saturn lasts approximately 10.7 standard hours, while it takes almost 29 standard years for it to complete one full revolution around Sol. Saturn has more than 62 moons, most of them home to at least small settlements. With its hundreds of brilliant rings, Saturn is a major tourist attraction within the Solar system.

The combined population of the planet's floating settlements is roughly 1.2 million people.

Uranus is the seventh planet of Sol. It is an ice giant that is tilted on its side so that its equator is at a right angle to its orbit. A day on Uranus lasts approximately 17 standard hours, while its orbital period is approximately 84 standard years long. The planet has 27 moons, with most of them holding small outposts.

The combined population within the planet's floating settlements is roughly 950,000 people.

Neptune is the eighth planet of Sol, and the sister ice giant to Uranus. It has a very similar composition, with high amounts of methane present in the atmosphere. Large amounts of water are also present in the planet’s mantle. A Neptunian day lasts approximately 16 standard hours, while a Neptunian year is 165 standard years long. Neptune has 17 moons. Triton, the largest, had an active outpost on it at one point in history, but it was abandoned several hundred years ago.

There is only one floating settlement, New Pacific, with a declining population of 56,000.

The Oort Cloud is a spherical area of space that encases the Sol system. It begins where the Kuiper Belt ends, and extends outward until almost 1.5 LY away from Sol. It is estimated that Oort Cloud may contain up to a trillion icy bodies, including planetoids and comets. Unlike the Romanovich Cloud of Tau Ceti, the bodies in the Oort cloud are metal-deficient, making the effort of locating bodies in this region to mine a pointless endeavor.