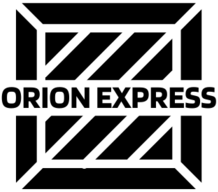 Founded in 2464, the Orion Express is a corporation designed to handle logistics for the Stellar Corporate Conglomerate in the wake of the Phoron Scarcity and the sudden issues the Conglomeration of the megacorporations presented. It consists of its main branch, dedicated to cargo services and transport, but also features a fledgling robotics division, mainly focused on industrial synthetics to aid in its logistics missions. The Orion Express is expected to become an integral part of the Stellar Corporate Conglomerate’s future through delivering supplies and merchandise throughout the Orion Spur.

Alongside handling the internal supply lines of the Stellar Corporate Conglomerate, the Orion Express also acquired the duty of delivering corporate goods to its buyers. The megacorporation extranet shops were merged into one domain: the Orion Express Market. Thanks to this, anyone planning to purchase anything from the Stellar Corporate Conglomerate must go through a supplier who eliminates competition to guarantee maximum profit. Countless workers now toil in multiple warehouses, hangars and ships to deliver the orders in time. No region is too remote for the Orion Express' couriers.

In spite of its recent unveiling, the Orion Express already wields considerable influence within the Orion Spur. Its fleets are a common sight within the Republic of Biesel, and its Corporate Reconstruction Zone, as well as anywhere with any SCC presence. Outside of these aforementioned zones, its influence quickly diminishes with much of its plans to expand its operations on hold until negotiations with potential clients have concluded. However, its couriers can reach any place in the known space.

The Orion Express employs a large number of unskilled workers in its warehouses, cargo depots, and ships. Pay is known to be meagre and benefits are few. However, the hours are very flexible and the entry barrier is as low as possible. Outside of the mass of manual labourers, there are roboticists, pilots, and other skilled employees who are paid better than their peers. But above all, there are the couriers who risk themselves daily to deliver goods anywhere it is needed.

Originating from Konyang, Chin-Hae managed to climb the ranks of the Stellar Corporate Conglomerate rather quickly, even during its “clandestine” phase. Responsible for the logistics oversight of the entirety of the new organization, she managed to prove herself to the megacorporations through her strategic management - even able to keep its existence hidden. Chin-Hae was the only individual deemed capable of spearheading the Orion Express’ success and thus was promoted to her position shortly after its unveiling.

Motto: “For all your logistic needs.”

Hailing from Mars, Fujii served as a financial manager for the Martian Government for several years until being offered a job in Tau Ceti in 2450 and choosing to remain there once Tau Ceti declared independence. She has a reputation for being a stickler for having her affairs in perfect order, an attitude that serves her well in her profession. Some of her underlings find her perfectionist disposition unbearable to work under. Perhaps due to that fact, Makato has started bringing in owned positronic employees under her, programmed to share her orderly nature. Despite all this, Makato is well-liked in the company, especially by those who realize that their pay is higher than it would be for other businesses due to Makato’s frugal nature. Privately, it is believed she holds anti-Solarian sentiments, though such opinions, if they do exist, remain completely uninvolved with her business dealings.

An Elyran with a background in Human Resources, Hakim Galla currently serves as the COO for Orion Express. He mainly acts as the middle-man between the company’s subsidiaries, ensuring smooth operations and providing a clear line of communication where needed. His other duties include quality assurance of company operations, and collaborating with data specialists to organise future business ventures for the company. Although recently promoted to the position, he has proven to be an effective and diligent member of the team. While he has been described as affable and charming by their colleagues. Galla is also known to readily employ their corporate HR skills on their peers during disputes on how the company should be operated.

Tuiqi, hailing from the Jargon Federation, serves as the Foreign Affairs Executive for the Orion Express. A middle-aged Skrell of 304 years, Tuiqi has worked mainly in Jargon Federation state-owned enterprises up until their acceptance into Orion Express. They pride themselves on their breakthrough into a majority human-owned enterprise; something that isn’t exactly common at an executive level. With an impressive work history with a focus on corporate relations, they are an easy pick for an executive role in Orion Express and spearhead negotiations with different entities throughout the Spur would be no trouble for this executive.

Valkyrie Exchange Terminal, Valkyrie, Tau Ceti: Orion Express’ Valkyrie branch reflects the circumstances under which the company was formed. Hastily constructed in 2463, the branch office is a large prefabricated building with easy access to most megacorporate shipping on the docks. Plans are already in place for an opulent complex located just outside of the Exchange Terminal which will house Orion’s management in the coming years.

Novus, Callisto, Sol: Orion Express’ Callisto branch, known by local workers as ‘The Hub’ due to its size and central role in the function of the port, was overhauled by the SCC shortly after acquisition to provide the next generation of logistical support and management. Fully automated and hosting a fleet of both flying and non-flying drones, Novus is the primary warehouse used to transport goods from the surface of the moon to the port's orbital facilities for shipping. Novus acts as the headquarters for Meng Logistics Incorporated.

Ganzaodeng, Konyang, Coalition of Colonies: Orion Express’ Ganzaodeng branch was opened shortly after the company’s formation, purchasing old Einstein Engines’ assets from the Konyang government in order to accommodate the rapidly-growing trade between Biesel and the Coalition. The city’s multicultural nature serves as a boon to the branch, with merchants from nearly every system being capable of doing business at the port. Despite the boon it provides to the local economy, the Ganzaodeng branch is looked upon with suspicion, being viewed as a destabilizing force on the planet where rules and regulations are discarded to keep up with the sheer amount of freight passing through it.

Zharrkov Major Depot, Adhomai, People's Republic of Adhomai: Located in Nal'tor, the Zharrkov Company's main depot is a mixture of office, warehouse, and shuttle port. Adhomian products flow from across the entire planet to be shipped to the wide galaxy here. A smaller branch exists in Crevus to buy products from the other Adhomian factions; these goods are then transported to the headquarters. The building is also home to a large armory full of Tajaran military surplus.

Despite the Orion Express devoting a large portion of its efforts to providing logistics to the Stellar Corporate Conglomerate, as well as the megacorporations that cooperate under its banner, it also has a fledgling robotics division. Dissimilar to the other corporations that mostly invest in the field through its subsidiaries, Orion Express instead has integrated it as a division instead - mostly dedicated to the production, maintenance and research of industrial synthetics. While the Orion Express is still considered a relatively new addition to the Orion Spur, many believe it will become a major contender to the other robotic giants that dominate the market.

The Orion Express was founded to assist the Stellar Corporate Conglomerate, as well as the other megacorporations within the organization, in regards to its logistics capabilities. Most of its operations are dedicated to logistics, which mostly perform operations centred around repairs, refuellings, resupply, and transporting of items. A significant portion of the Orion Express’ abilities is derived from its logistics department, however, it is also supplemented by its robotics subdivision - responsible for supplying its logistics subdivision with its needed requirements to keep it functioning. Any remaining ability to manufacture is then often leased to either the Stellar Corporate Conglomerate or its aforementioned “subsidiaries” that dominate the rest of the Orion Spur.

Alongside its logistic and robotics divisions, Orion Express has a robust delivery system. A fleet of cargo ships and couriers stand by to deliver the corporate products to whoever acquires them. No place in the galaxy is unreachable for the Orion Express's staff. While its vessels are more than enough to bring cargo to large installations, Its couriers are deployed to deliver parcels on the planet's surfaces. Riding on the top of hoverbikes, they face all kinds of hazards to bring orders in a timely manner.

A subsidiary of the Orion Express, the Zephyr Shipping Company imports, and exports products from the various nations of the Sparring Sea. These include the Republic of Elyra, Empire of Dominia, Izweski Hegemony, PRA, DPRA, and NKA. With an enormous range of products, buyers can purchase an assortment of goods from the unique cultures present there. From Dominian sabres to Elyran fashion pieces to Unathi antiques, Zephyr Shipping has it all.

Considered the brainchild of Ziynet Fahimi, an up-and-coming logistics expert who had worked for Hephaestus, The Zephyr Shipping Company is an experiment in the possible future of corporate logistics and delivery. By trying a mobile warehouse and office located in a vessel Fahimi hopes to achieve a more efficient and cost-productive means of product transit in the volatile Sparring Sea. The project was approved shortly after the formation of the Orion Express and is a conglomerate of former SCC company transports, contractors, and facilities that existed there prior.

The Zephyr Shipping Company's brands are focused on rebranded cultural products and curios to be sold in the wider spur. Their covered area including Moghes and Adhomai also allows them to cash in on the Unathi and Tajara consumer market.

Heirlooms From Afar: A more controversial brand, Heirlooms From Afar sells various antiques purchased in the region of space. These can include Unathi ancestral armor, Tajaran antiques, or Elyran rugs that originated on 22nd century Earth. Despite an extensive certification process so that buyers can know the legitimacy of their product, some accuse the company of selling counterfeits or stealing their products.

Zharrkov Shipping: a brand specialized in selling Tajaran made products to the wide galaxy. From foodstuff to military surplus, anything Tajaran is sold by the Zharrkov. Thanks to contracts with the Tajaran governments, the brand has a massive arsenal of surplus guns available.

“Right to your doorstep.”

A subsidiary of Orion Express, Meng Logistics Incorporated was to be purchased on behalf of the Stellar Corporate Conglomerate to bypass the restrictions placed on the existing megacorporations following the collapse of the Solarian Alliance. It focuses on delivering supplies and equipment to the corporate assets of those beneath the banner of the Stellar Corporate Conglomerate within the Solarian Alliance, and even the Jargon Federation.

Founded shortly after the Republic of Biesel gained independence, Meng Logistics Incorporated struggled to keep up with the ever dominant megacorporations that rule over the Orion Spur. It found itself initially successful after being relied upon by Idris Incorporated to facilitate deliveries to multiple Idris Incorporated facilities, including Silversun. Its success was short-lived, and the company was approaching rapid bankruptcy before being acquired by the Stellar Corporate Conglomerate in late 2463. It is mostly used as a loophole in the megacorporation treaties with the Solarian Alliance, successfully doing so for the most part.

Meng Logistics Incorporated focuses on delivering for the Stellar Corporate Conglomerate within the Solarian Alliance and the Jargon Federation, usually either supplies for corporate assets within the territories or delivering items bought by customers. It mostly finds itself being the primary supplier of consumer electronics within the aforementioned regions, such as PDAs and wristbound devices.

Gadgetz: a line of consumer electronics that Meng Logistics Incorporated sells to those within both the Jargon Federation and the Solarian Alliance. This includes the Nralakk projectors, PDAs, wristbound devices, and much more. It usually finds itself supplied by the Special Economic Zones within the Core sector; Qerr’Malic, Aliose and even Aweiji in the Elemental sector.