Qerrbalak is the fourth planet from Nralakk, and the origin of the Skrell. One of two habitable planets within the system, comprised of various climates ranging from taigas to tropical rainforests. Qerrbalak is 1.8 times the size of Earth, and sports an atmospheric composition of 82% Nitrogen, 17% Oxygen and 1% other. Qerrbalak is currently undergoing slow terraforming efforts to reduce the damage inflicted by the Skrell during unenlightened times.

Qerrbalak does not have much diversity in biomes, however, is perfect for the Skrell. Largely very humid, and marshy, with most of it being covered in freshwater and saltwater seas, The saline levels are lower than most seas elsewhere; which his uniquely suits the Skrell, as they can safely survive in any of the seas across the Homeworld. It also has polar icecaps, where some Skrell Research Facilities are located and the Headquarters of the Kala.

Before the Skrell entered an era of profound modernisation, Qerrbalak was rich in abundant mineral deposits - both in the planet's deep oceans and its surface. It quickly changed as the Skrell poured resources into pillaging their planet, with little regard for conservation of the resources until it was too late. Now, Qerrbalak orbits Nralakk will little resources left to extract, which prompted the erection of the Jux'Qwi Monument - a reminder that exponential growth cannot go unchecked.

Eqloq lies within the western hemisphere of Qerrbalak and whose inhabitants have maintained a sheltered, agrarian lifestyle for over a thousand years. Skrell within the region are often tied to traditional values, including xenophobic ideals and a decentralized galactic presence, leading to a number of insurgent-esque ideas throughout the region’s habitation. Qroisht, Regluk'qlip, and Weuzshi are believed to have been founded after several tribes within Ocror migrated north due to various ecological factors. The region is encapsulated by Qeblak and has been so since at least since Skrell developed literacy, with some of the oldest monuments dedicated to the constellations in the entire Jargon Federation.

Existing within both the southern and western hemispheres of Qerrbalak, Ocror is considered by many as the "origin-point" of the Skrell, and offers extensive evidence as a cradle of civilization. Arqo-Wohai, the common name given to the largest impact-crater within the region, has several links as the catalyst that allowed for the evolution of life on the planet. The necessary building blocks for life likely arrived aboard the foreign body, but many also believe that it brought with it an element that allows the Zona Bovinae of species to be capable of supporting extensive psionic usage. Qe'blak'qlip, Kal'lo, Tegucigalpa, Zeshblook, and Heshy'qlip maintain an equal population of both Qeblak and Weishii followers. The region previously devoted itself to mineral extraction, and industrial manufacturing within the early days of its establishment; however, it now exists as the bureaucratic center of the Jargon Federation and hosts the Capital (Kal'lo). 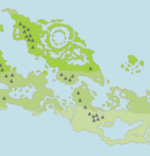 Resting along the equator, Ash'Alq is the largest tropical island on Qerrbalak. It has maintained itself as one of the most important cultural regions throughout the entirety of the Jargon Federation; most notably, it holds the Tzqul Archives within the atoll of Ploat'nil, which collectively hosts nearly all of Skrellian history. The region began to develop a tourist economy based around these important sites. Ploat'nil, Gfua'Qrsulf, Miftaup'Nion, Duivliak'qlip and Gialock find most of their inhabitants following Qeblak, and hosts several of the largest observatory domes which are capable of viewing nearly all the constellations at any given time. The southern coast hosts a large reef, which is fiercely protected by the local government to ensure its survival. The reef is speculated by some to be the largest in the Jargon Federation, and perhaps the entire sector. 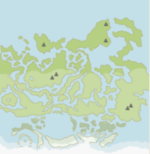 The most south-eastern continent, Creiq’Bruq enjoys a varied climate, fauna, and flora. Crieq’Bruq is also the newest continent, having formed geologically late in the planet’s formation. As a result, Crieq’Bruq is plagued by frequent, but mundane, earthquakes and tsunamis. Architecture on the coasts includes large drainage ditches, levees, and stilted buildings. Further into the countryside, large high-rises are built to account for the sway and destruction earthquakes may have on the land. Skrell from Crieq’Bruq are traditionally valued for their physical prowess, but also their connection to the land itself. While these Skrell still place a strong value in the stars above, they have a similar relationship with the land and the ocean. Industry is primarily agricultural and scientific, though some areas are difficult to inhabit due to the threat of geological instability.

Ucra is a geological atoll that was formed after a large-scale impact event early in Skrell history. The Ucra crater is considered by most to be the deepest underwater pit on the planet. The atoll surrounding the pit is Ucra proper, and are home to various Skrell aboriginals who have a long history of ocean worship. Moreover, most of the Ucra settlements in the Jargon Federation are still governed by people who have long generational ties to Ucra. As a result, citizens here are sometimes xenophobic and wary of outsiders. Ucra cuisine consists of many delicacies from the sea, including pickled urchin, flayed mollusk, and roasted seaweed. Some villages lie a few miles out along the coast, anchored to the sea floor.

Long before Skrell had formed the first proto-cities, they looked to the stars for guidance and enlightenment. It lit a desire of curiosity in the Skrell prompting the species to probe, query and investigate the planet they called home, Qerrbalak. The inquisitive nature of the Skrell gave rise to the early development of the Nral-oqq (Nrallak Year) and subsequent development of a chart depicting the days (‘viq), weeks (‘viqi), and months (-qog) of the year (-oqq).

Due to Qerrbalaks relative proximity to Nrallak, and axial tilt, the Nral-oqq has been devised into six months that each harbour 48 days - resulting in a total year being 288 days in length. One Nral-oqq is equal to 1.18 Solarian Years.

Nral-oqq has been split into two seasons; Qu-Paalq and Lu-Paalq, each respectively meaning Warm Currents and Cold Currents. Temperatures, and humidity, will commonly spike during Qu-Paalq - with some days reaching 42°C with a humidity index cap of 92%. On the other end of the spectrum, Lu-Paalq is associated with cooler weather prevailing, however, an increased probability of massive tropical storms to develop. The development of the Skrell has mostly accommodate the humongous storms, with some even welcoming them as a way to ‘reset’ Qerrbalak for the upcoming Nral-oqq. Temperatures will dip to usually 25°C and a humidity index that will cap at 50%.

The six months that form the Nral-oqq have guided Skrell for millennia - usually revolving around the most prevalent constellation spotted at the time of the calendar’s formation. Each month is divided into eight weeks. The current iteration of the Nral-oqq is commonly adapted to other planets inhabited by the Skrell for it to be accurate. 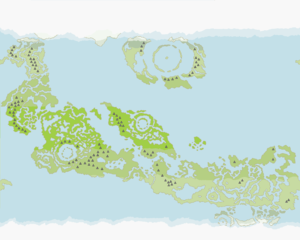 A map of Jargon IV (Qerrbalak), unlabelled to show the terrains and landmasses. 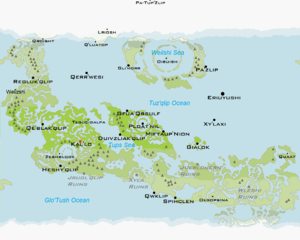 A map of Jargon IV (Qerrbalak), labelled to show points of interest.

the Vru'qos, or Leviathon, is a large aquatic cetacean-like mammal. Resembling a Blue Whale, with appendages similar to the Skrell headtails, it can reach up to 40 meters (131 feet) and weigh up to 367 tonnes (404 tons). It is one of the largest animals on Qerrbalak, as well as the eldest - with their lifespans capable of reaching up to six hundred years. The Vru'qos has shown psionic capabilities, utilizing it to find mates and smaller aquatic animals to feed on. 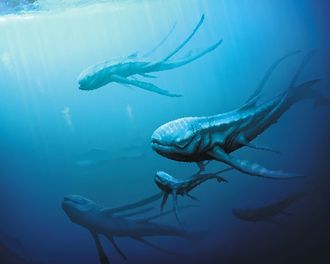 The Vru'qos stick close to the surface, but have been spotted close to the bottom of the various oceans across Qerrbalak.

The Agoliz, or Mollusk, are amphibias creatures similar in appearance to giant Snails that typically were found along the coasts of the various island dotting the seas of Qerrbalak before their domestication. Capable of reaching 1.8 metres (5'9 feet) in length, and a weight of 12 tonnes (13.2 tons), the species provides dozens of Skrell with vital nutrients after they've been culled. They are said to have an exquisite flavour and tender feel when ingested by the Skrell - other species usually going out of their way in avoiding it due to its horrific aroma.

The Noni-Qii, or Sky Grazer, a type of avian fauna that inhabits the skies of Qerrbalak - infamous due to their pest-like nature. Similar to a Mantaray, but on a much smaller scale; reaching up to 1 meter (3 feet) and weighing only 7 kilogrammes (15.4 pounds). Their small stature has allowed for the species to easily get between Dyn and Wulumunusha bushes and pick their ripe bearings. After the near-extinction of the species in 1622 CE, the Federation began a programme to increase their numbers once again - prompting a revival of the species that continues to prey on the Skrell plantations.

First found along the river deltas across Qerrbalak, Dyn has since been domesticated by the Skrell. Plantations can typically be found in various lakes, bogs and marshes that grow hundreds of kilometres worth of the plant. Dyn is typically used to create various drinks, or peeled and then mashed in order to create a delightful meal known as Qrathe. Dyn is typically the first seeds planted in colonies, and has become a staple part of Skrell Cuisine.

Wulumunusha naturally grows in alpine climates, typically closer to the poles of the Homeworld. With roughly only a dozen or so plantations dedicated to the growth of the plant, prices tend to skyrocket when out of season. It is used by both Qeblak and Weishii followers, and is said to unlock barriers to both Nlom and Srom. Outside of religious usage, Wulumunusha has also managed to gain a nefarious reputation especially since a gene-spliced sample, that supposedly originated on Mars, has begun to be introduced across the Federation.