Since diverging from a shared ancestor known as the "Proto-Skrell" approximately ten million years ago, the Skrell are divided mainly into three ethnic groups: Axiori (Aquatics), Xiialt (Coastals), and Xiiori (Hybrids). The variations between the two are due to adaptations to better fit their environment, while interbreeding maintained genetic diversity in both groups.

For information on how Skrell subspecies view eachother outside of the Jargon Federation see Starlight Zone.

Axiori, which can be approximately translated to “aquatics” or “ocean-dwellers”, are notably better adapted to survive within the depths of the Homeworld’s seas. Typically sporting much more pronounced webbings for faster swimming, as well as larger and more monocular eyes to better perceive their environment. They also possess a small tail that acts as a rudder; making them capable of changing direction at high speeds when underwater. The high-pressure environments in which they thrived and evolved have also resulted in a lower metabolic rate for the ethnicity, resulting in easier fat accrual.

Axiori, on average, tend to have far more raw psionic potential when compared to the Xiialt. Many studies that have dived into the topic in an attempt to answer why this occurs, suggest that is due to increased psionic usage and repeated interbreeding further strengthened these natural capabilities. Axiori also tend to have much darker skin tones, a trait believed to have helped them camouflage within the dark, deep depths of the Homeworld’s oceans many millennia ago.

After the Ranaera Skrellis split into Axioris Ranaera the Axiori lived in a relative primitive age for much longer than the Xiialt. While metallurgy was discovered by the Xiialt around the year ~12000 BCE the Axiori lagged behind due to their lack of fire. This caused true metal production to lag far behind for the Axiori; starting when information between the two subspecies was shared around ~10000 BCE due to Xiialt and Axiori coming back into contact. This relationship stays consistent today with many technological advancements being done above-water leading Axiori culture to emphasize traditional labor over research. Because of this lag in development the Axiori grew closer familial bonds than that of the Xiialt and communities of Axiori feel closer knit even to this day.

Xiialt can be approximately translated to “coastals” or “land-dwellers”. These Skrell are the biological cousins of the Axiori. They tend to be somewhat short, but the stout nature of the Xiialt helped them traverse the rough nature of their biome with bipedal movement. Due to this, their feet are somewhat bigger than those of an Axiori and their leg muscles are more defined. It is theorized that this helped early Xiialt outrun predators on land. Xiialt also tend to be much leaner; this is due to their slightly higher metabolic rate due to the abundant presence of food on the surface. While Xiialt are better adapted to live on land they are still able to breathe and see underwater; however, their swimming is not as agile.

After the Ranaera Skrellis split into Xiialtus Ranaera the Xiialt advanced technologically at a much faster rate than the Axiori. Quickly discovering metallurgy around the year ~12000 BCE and advancing their research, the Xiialt were often far ahead the Axiori in terms of development. As a consequence, Xiialt occupy a large portion of Jargon's research and science society; however, this does not mean they are necessarily smarter. The different cultural shifts experienced at the beginning of the Ranaera Skrellis offshoot allowed Xiialt culture to place more emphasis on scientific curiosity than that of the Axiori. Due to this cultural divide the Xiialt often value their workplace bonds higher than that of their familial bonds; however, both are still important.

Xiiori can be approximately translated to “hybrids”. These Skrell are the off-spring of a Xiialt and an Axiori (and in some cases a Xiiori and a Xiialt/Axiori). Xiiori genes typically tend to lean more towards their Axiori ancestry. This is due to most Axiori genes being dominant; therefore, Xiiori have more psionic potential than Xiialt but less than pure-blooded Axioris. Typically, a Xiiori will look like a 60/40 split when it comes to their Axiori and Xiialt parents. There is little to no discrimination towards Xiiori from either Axiori or Xiialt; however, Xiiori are at a greater risk for many of the disorders that plague Skrell (often having at least one). Xiiori will most likely have a tail (unless they are the off-spring of a Xiiori and a Xiialt).

NOTE: When playing a Xiiori you must pick the subspecies that most closely resembles your character. You also must denote that your character is a Xiiori in your medical records and/or flavor text.

While most Skrell originally mated within their own ethnicities, as society evolved it became increasingly common to interbreed. This resulted in the designation of a new group known as the Xiiori (Hybrid), a combination of its parent ethnicities. Due to the genophage, however, a growing portion of newborn Skrell are Xiiori, which has all but ensured the slow decline of the other ethnicities as their DNA becomes more blurred in the face of the genophage crisis.

Largely considered lost to the ravages of time, it is only through archaeological evidence excavated from numerous locations across Qerrbalak that the Skrell are able to gather even minuscule amounts of factual information. Through a combination of both archaeological excavations, and a bit of oral history passed through the generations, it is believed that Ranaera Skrellis (the first Skrell) diverged from a primarily sea-dwelling creature. It is at some point in the development of the Ranaera Skrellis that specific circumstances tailored the evolutionary path of the species to begin developing the ability to use psionics; mostly as a method of continued survival.

Ranaera Skrellis really only expanded onto the surface of Qerrbalak after several extinction events that proved to be in skrellian favor. It was here that the Ranaera Skrellis split into Axioris Ranaera and Xiialtus Ranaera. Whilst viewed upon as ethnicities in the modern-day, they are both in fact subspecies of the Ranaera Skrellis that developed separately to live either primarily within the shallows and depths or along the coasts and dryer regions of the Homeworld. 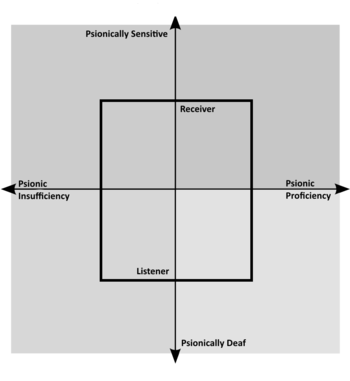 Axiori typically have a higher number of psionically adept individuals compared to the Xiialt, while psionic receptivity doesn't appear to have any correlation with ethnicity.

While both have a similar range of intellectual ability, the Axiori tend to have a higher number of psionic prodigies than their counterparts. It is theorised that this occurs due to genes passed down from the Proto-Skrell, which are significantly more common in the Axiori (recorded to have interbred with the Proto-Skrell until their eventual extinction) than the Xiialt. The discovery, pioneered by Psionic Analysis professor Yleshir Zrose, was titled the Zrose Graph. They conducted numerous inquiries into the psionic inclinations of both ethnicities during the modernisation of Skrell culture in the early 2300s BCE.

The Zrose Graph is typically used as a visual representation of a Skrell's psionic ability - usually displayed after a Skrell has undergone a Psionic Capability Test where Skrell are tested on their psionic receptiveness by highly trained Skrell known as Nlom'Qalq, roughly translated into Tau Ceti Basic as Wake Examiner. High-scoring individuals are pursued, oftentimes rather doggedly, by Federation officials and pressured into taking opportunities relating to either the Starkeepers or Sromkala. Those who refuse and fail to find an alternate path fast enough may soon find other doors to be closed to them—and the Federation is more than happy to extend a hand to such individuals, placing them in a role where their talent would not go unappreciated.