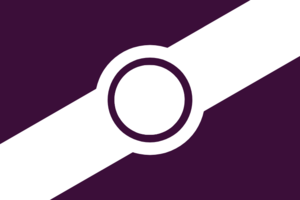 The flag of Aliose, mostly likely hung with pride by many of the archologies throughout the barrens of Aliose.

Aliose, also known as Jargon V, has a heavy atmosphere of cold nitrogen, requiring internals and heated clothing to survive outside. To combat the planet’s much colder temperature, early colonies were subterranean, and heavily utilised geothermal energy for cooling and power production. As it gradually became dotted with cities and laboratories as much of Qerrbalak’s scientific elite sought to take part in the first planetary colonization by the Skrell and over time gradually resulted in Aliose becoming the scientific powerhouse of the Federation.

With the events of Glorsh-Omega, Aliose gained a subculture of deep-seated patriotism and duty as former military members and scientists worked together to strike back against the machines and establish a stronger Federation. The city of Fedas was especially successful in their struggles to give Aliose back to the Skrell, and became the planet’s centre of government following the fall of Glorsh-Omega.

Today, it is largely considered the heart of the Federation’s scientific endeavours. Research conducted by the Aliose University of Medical Sciences has had a role in producing many of the medical technologies used by the Skrell, making it a very attractive destination for aspiring healthcare workers. Aliose continues to produce a large number of brilliant minds to this day, and they can usually be noticed by their cold, white, thick skin due to government-sanctioned genetic treatments in the 1700s CE that allow citizens to survive the colder temperatures easier.

Discovered by ancient Skrell astronomers in 5551 BCE - where first telescopic observation of the planet was by Vlery Ocktoq. It was noted by the Skrell to have distinct albedo features, vast polar ice caps that spanned a large majority of the planet. Long after its discovery, the Skrell were captivated by the possibility of surviving on a planet that wasn't their Homeworld - however, could not determine whether such fantasies were viable until they could explore the stars.

By 1850 BCE, hundreds of manned probes had landed on the planet; each to extract information from the environment to determine its habitability. It was quickly confirmed that despite the dire circumstances on the planet, it was indeed habitable by the Skrell. The confirmation prompted festivities across Qerrbalak with widespread colonization quickly becoming a feasible idea on Aliose. It only took a mere century for complete preparation of launching multiple spacecraft aimed to colonize the planet.

Weeks after their launch, the Skrell landed on Aliose. They had overcome the initial barriers, being that of getting so many Skrell to the planet, but their true struggles were just beginning. The cold, desolate nature of the planet proved to be a major issue to a vast majority of Skrell as hypothermia quickly set in for those without specially adapted clothes aimed to retain body warmth, combined with the nitrogen-rich atmosphere that made it nearly impossible to breathe without modified internals. Hundreds, if not thousands, of Skrell, perished in the first few months before the completion of the crude colonies. The vast loss of life eventually prompted the creation of the Aliose Shrine, a kilometer-wide series of stones with plaques engraved with the names of the deceased colonists.

By 900 CE, most of the issues faced by the Skrell had been alleviated one way or another. Advances in central heating, as well as terraforming, allowed for the planet to undergo vast changes such as an increase in temperatures and the presence of oxygen in the atmosphere. Whilst specialized clothing is still required, internals had become a thing of the past. The daily earthquakes soon were negated with advanced technology, and quickly became a mere part of the Skrell routine on Aliose.

During the rise of Glorsh-Omega, Aliose saw itself turned on its head. Research direction was now wholly under the control of Glorsh-Omega's regime, with certain topics even unofficially blacklisted, but with this increased oversight came increased access to data and resources. To utilise these resources, a large data processing centre was constructed on the planet, which was later found to double as a massive surveillance program on every researcher on the planet. The disappearance of the intelligence resulted in most facilities across Aliose to shut down, having relied on the constant surveillance of Glorsh-Omega and took several days to be rebooted - however, the planet was left relatively undamaged and was for a short period in the Jargon Federation's history, the capital.

A labelled map of Aliose displaying cities for easy usage.

Aliose is considered an arctic world, rich in both nitrogen and oxygen. Only during rare heatwaves do the temperatures rise above freezing, and even then only for a few weeks at a time. In the northern wastes, a temperature reading of -78°C was not uncommon during mid-Qu'Paalq. Aliose is riddled with both tectonic activity and volcanic activity. It is common for earthquakes to make an almost daily appearance. Whilst slightly worrying during the first days of colonisation, Geologists have theorised that this activity will only become dangerous in approximately 20,000 years.

Aliose appears to have been unable to evolve flora capable of sustaining any species of fauna, so whilst it is capable of supporting various species of flora - the hostile nature of the planet's weather, and geological activity, has made the planet have undesirable qualities that keep native fauna non-existent. The Jargon Federation has numerous plans in regards to introducing arctic flora, and fauna, from the Homeworld but nothing has been set in stone as of yet.

Tracing back to the early days of its colonisation, Aliose has evolved a culture of relative isolation: where small clusters of Skrell with complementing skillsets have prevailed. Their locations explicitly spaced out so that the Skrell could monitor, track and store data gathered from their surroundings on Aliose - similarly occurring with colonists that would tend to form groups that cover a wide skillset with little to no gaps.

Due to the planet's perilous circumstances, the architecture of the settlements were often created in small batches so that essential equipment was always close by and could easily be repaired if it suffered damage during the earthquakes. While the earthquakes created their own issues, they were amplified by the gigantic snowstorms that would interfere with communications equipment and the Nlom field, contributing to the insularity and tight group mentality of each cluster. This also led to clusters becoming self-reliant by necessity - and despite technological advances, many Skrell continue to observe this as a kind of custom, where they attempt to be as independent from other cities across Aliose as possible.

Whilst many of the custom, observances and norms of the original colonists continued throughout the generation, additional traditions sprouted shortly after the establishment of the arctic world. Hoqom'Es-Masyara, or "Law of Ice Society" in ancient Skrellian, was strictly (unofficially) enforced. This later proved to be a relatively difficult affair for settlers that established themselves on Aliose after its initial colonisation. This prompted the formation of Hoqom'Didi-Masya'Es, or "Established Law of Ice Society", which quickly eased the growing between the "natives" of the planet and the influx of additional settlers as it became an official part of society on Aliose. This has lead to many a-times where arguments will suddenly arise, with individuals attempting to prove their point -- making it seem to outsiders that those from Aliose are rather aggressive, but in reality, nothing could be further from the truth. It is merely a way to ensure harmony and uniformity amongst one another. Should an individual prove their claim, both parties are to recognise the argument has ended, and return to a professional and amicable relationship amongst one another.

Skrell not from Aliose often remark on the "strangeness" of the Hoqom'Didi-Masya'Es, however, most tend to keep their feelings in regards to the subject to themselves when confronted with the system outside of Aliose.