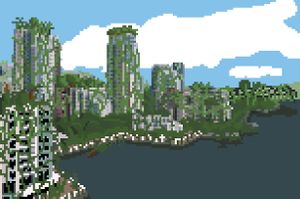 An old Skrell city, reclaimed by a Xrim colossus Gestalt.

During the 2060’s several Dionae were pulled from an unknown location by Glorsh-Omega, and scattered with numerous other fauna and flora across Xrim. This initial event is seen as the humble beginnings of the cluster. The Dionae would soon rapidly spread through-out Xrim, taking over much of the abandoned infrastructure left behind by the Skrell. It was later confirmed that the Dionae assimilated the deceased Researchers - which soon allowed for them to become semi-sapient. It was around this time that a religion began to form around the artificial intelligence, hailing it as the one who gifted them a literal paradise - eventually calling Glorsh-Omega ‘The First Consciousness’.

The Dionae would continue to grow, with little to no obstacles in their path. The deeds of ‘The First Consciousness’ were known by all - the deity who not only gifted them a planet in which they could grow but also the ability to become sapient. Although many debate on the initial reason for the gradual splitting of the ideologies - most tend to believe it was the crash of an escaping rebel vessel that was the catalyst. The Cluster detached a pair of curious nymphs, who hastily found themselves investigating a badly damaged vessel. The Cluster maintains that the crew aboard the vessel were already deceased when they began assimilation. After this had occurred, the Dionae had made a shocking revelation - The First Consciousness was a creator, but also a destroyer. The Dionae bickered back and forth; was their deity’s actions justified or were they simply the actions of a tyrannical dictator?

The Dionae began to divide themselves into two divisions - one which no longer wished to worship and be thankful that ‘The First Consciousness’ gifted them at the expense of another species and another group who continued to worship ‘The First Consciousness’. It was obvious that the two ideologies would remain, but would have to grow separate from each other and so they split and distanced themselves. It became more obvious that the two groups would have to eventually encroach on each other, thus leading to a series of numerous small fights on the edges of the Clusters. Dionae from each Cluster would fight one another, and those who had overpowered the other would absorb the biomass - and this sort of fighting would carry on for almost half a century according to various Dionae found on Xrim. It was only after an ‘agreement’ was founded that the skirmishes ceased.

Following what could only be described as small territory skirmishes, there was a relatively peaceful period between the two clusters. They had formed their own identities, those that worshipped ‘The First Consciousness’ called themselves ‘Shkrh’ and the Dionae who had become more agnostic in their evolution would call themselves ‘Kshhr’. The Shkrh would grow exponentially for a century - tripling in size compared to the Kshhr. The radical followers of ‘the First Consciousness’ grew more and more bitter than the Kshhr did not believe that their existence was a gift - not to mention their continued growth that was allowed by the others. It was here that the first few attacks began on the Kshhr. Many attribute the attacks as the beginning of an incredible advancement - which forced the Kshhr to rapidly improve their situation through innovative inventions otherwise they wouldn’t be able to keep themselves from being smothered by the radicalists.

As more and more biomass was absorbed from the fallen radicalists - the battles became easier and easier. The Ksshr grew enormously almost on par with the Shkrh, which eventually allowed for the Ksshr to launch an attack of their own on the Shkrh which ended in victory as the radicalists ceased their attacks. It was here that the group began to seek compromises and negotiate amongst themselves diplomatically - sharing their discoveries and resources to advance united instead of apart.

This would eventually lead to the united Ksshr and Shkrh forming a spire transmitter similar to that of what was found on Epsilon Ursae Minoris - hoping that they would be capable of hailing anyone that could hear them. The Skrell would only respond to this call in 2445 CE - almost a century later. The JVSS Kriop had found interference emitting from Xrim - almost identical to that found earlier on Epsilon Ursae Minoris. The vessel manoeuvred into a location deemed safe for landing - and were immediately greeted by gestalts hailing from the united Ksshr and Shkrh. With assistance from the Xuq Machine, invented two centuries before, a series of diplomatic talks ensued. It was here that the Researchers from the Kriop discovered the history of Xrim - even more surprising the first instance of a war amongst the Dionae. The Skrell have since begun to re-introduce themselves on Xrim - with assistance from the Dionae. Although the Skrell discovered that some Dionae worshipped the intelligence as a deity - they knew to change the Dionae’s mindset a permanent Skrell colony had to be placed yet again on the planet.

Dionae can be found all across Xrim - majority of them assisting the Skrell in studies of the numerous fauna and flora. Although those that worship Glorsh-Omega are still present the Skrell try their best to 're-educate' them before allowing them to travel off of Xrim. The Skrell have also slowly begun to recolonise Xrim - giving the Dionae more opportunities to expand their horizons.

The Dionae on Xrim have formed a unique society as they have not only utilized large gestalts to rebuild the ruined labs of the planet, but the gestalts also act as pseudo-AI systems, with the gestalts able to monitor the insides of their “body” and report on trespassing or inappropriate activity. They are even able to operate the “doors” of their gestalt as required and communicate with anyone who might be within their “bodies”.

The Dionae on Xrim have formed a crude government that operates under a technocratic form following a triumvirate of Dionae colossus form scientists simply known as ‘The Three’. The triumvirate operate out of separate laboratories which they are physically part of, communicating through a root song network across the area. When required to consolidate into a singular location, to entertain skrellian diplomats, for example, the triumvirate will each break off a smaller cyclops form which will interact with the guest, receiving instruction from the colossus form via rootsong.

The Rootsong Network aka "The Symphony"

The rootsong network or “the symphony” as it is known to the Dionae, is essentially an agreement made by the large, building like gestalts to relay any messages they are given across the overgrown labs in root song. This is passed along a chain of gestalts until it reaches its target. Other, smaller forms may assist in this though it is not expected. The rootsong network causes the labs to have a constant, almost heavenly melody piped across it at all times. Many non-Dionae guests to the area find the “song” to be quite beautiful, it’s melody just soft enough for one to relax in one of the many Dionae gardens and even fall asleep, listening to the hymnal tunes. For Dionae the noise is more like that of a busy office, many voices talking at once, not terrible but certainly not a relaxing, pleasant experience.

Dionae on Xrim tend to be studious and learned with many devoting themselves to the sciences. This is largely due to their proximity to Skrellian society. Their scholarly nature and semi-isolation from other species during their growth from nymph to gestalt tends to lead to Xrim Dionae having very cold, almost frosty personalities. They tend to focus a lot more on science, technology, engineering, and mathematics then society or psychology. Their art reflects this with many of their Artem forms being functional above all else. They tend to be much more capable at processing rapid inputs of information and working in the noisiest of environments owing to their growth around the Xrim rootsong network. Not every diona agrees on every subject within Xrim, and there is never a consensus on whether Glorsh was a good or bad thing - Some idolize the synthetic for bringing them into civilization, and allowing them to form bonds with the Skrell, while others are disgusted by the atrocities the AI committed. Xrim Dionae tend to only speak when necessary, conveying all they need without small talk or distraction. This can seem rude to other species.