Interstellar travel is prolific across the Orion Spur. Long trips across the stars continue to become more affordable for commoners, especially in the 2460’s. This is a page dedicated to the specifics of this travel, ships and stations which are most often encountered, and the primary differences between warp and bluespace.

In modern times, the most frequently utilized form of space travel - especially over long distances - is “ bluespace travel.”

This is the usage of phoron to bore tunnels into the Bluespace Dimension, afterwhich the vessel uses on-board propulsion to place itself into the dimension and begin travel. During travel through bluespace, the ship is quickly enveloped in a tightly-conforming “liquid” which fills the Bluespace Dimension, and is highly dangerous and anomalous in nature. This often spells disaster when it enters unsealed areas of ships, and all bluespace-capable vessels utilize multiple failsafes as well as energy shields to prevent the dimension from entering the ship.

Travel through bluespace works by shortening distances tremendously between the starting point and destination. Once inside bluespace, the ship is unable to move through normal means, and requires a specialized bluespace drive to move. Different drives move the ships at different speeds, with the speeds below indicative of their respective maximum velocities in Bluespace.

Bluespace travel is very overt to onlookers, with a visible “photon wake” being generated by ships travelling through it. While those inside the bluespace dimension can not see out, their vessels are very visible outside, and can even be interacted with were it not for the risk of intersecting paths or slipping into the dimension with them, without escape. The mesmerizing and sparkly appearance of a ship traveling through bluespace is also indicative of its extreme ease of spotting, tracking and worse yet - following, on its course using many types of sensory apparatus. 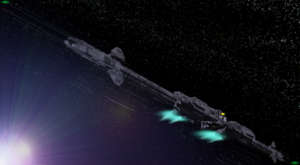 Nearly 300 years of history have solidified warp as the mainstay for galactic travel, however since the discovery of Phoron, Bluespace and the more modern means of travel they provide, it has dwindled. Warp is still commonly used as a back-up means of propulsion for larger vessels and small short-ranged vessels benefit greatly from the cheaper costs. Older fleets such as the Scarabs benefit greatly from the vast majority of their vessels possessing warp capability, cheapening travel significantly for the grand mass of ships.

Warp works by very literally warping the space around a ship or multiple ships, riding on a cosmic deformation that facilitates pushing the ships dozens of lightyears at a time. When inside a “warp bubble,” ships are very difficult to stop through external forces and are able to freely pass through anything not purpose-built to stop them. Ships entering warp are simply seen as speeding up very, very quickly to an onlooker, before stopping abruptly and blasting off into the void.

Starting a warp engine requires no phoron, but it is power hungry all the same. They require no direct fuel source beyond energy from a ship’s own reactor to provide movement.

Low-end warp drives are roughly a quarter of the highest possible bluespace speeds for their respective weight classes, while the highest end can reach up to half. Higher speeds are possible to obtain but generally avoided due to safety concerns and lack of necessary power in even the most efficient or over-tuned vessels.

The standards for interstellar propulsion involving sublight speeds are only addressed nowadays by racers and atmospheric-capable spacecraft. Moving in the literal sense without utilizing bluespace or warp pushes vessels of any kind to their extremes. Even the most powerful gravity generators and dampeners can not ease all inertia for a ship’s crew, making sublight travel slow and meticulous.

Spaceships in the 25th century are a common sight. Different star nations and alien powers use different models, designations, and hull types that makes specifics impossible. There are giant barges, small freighters, huge carriers and battleships, heavily armored cruisers, and more. The primary distinction between all ships is whether or not they are equipped with Bluespace Drives that allow them to use FTL outside the network of Bluespace Gates. Military, research, and scouting vessels typically have bluespace drives while the majority of commuter or civilian traffic must use bluespace gates to go between star systems. Warp drives are also relatively common, being a cheaper, albeit slower, solution to non-gate travel.

Ships, much like stations, hold a three or four-letter prefix in their name that designates the ownership, type, and classification of the ship. To get a prefix that works for that faction, abbreviate the faction then add the ship type. For example,

A Shuttle is the smallest of all spacefaring vessels. Shuttles are very common and inexpensive. Many larger ships and carriers often have two or more shuttles for atmospheric operations. These cost just a bit more than a hovercar.

There are all kinds of space stations in orbit of planets or out in deep space. They vary from spaceports where ships dock and crew mingle, sprawling habitats where entire generations live and work, deep space pirate bases, bristling cannons in orbit of planets, giant refineries or factories, and more. Any sort of industry or infrastructure that would make sense to put out into space (and somewhere it doesn't seem to make any sense) is out there somewhere. Many of these stations are worked in by the Spacers.

The mainstay sight of commercial spacefaring is the freighter vessel, used for the transport of supplies, raw materials, and other goods from pretty much every destination in the known universe. There are further subclasses of Bulk Freighters, Tankers, Barges, etc. These are relatively inexpensive, a small step up from a shuttle, costing around the same as a high-end car, not including secondary expenses. It is not unknown for certain owners to stick with a freighter, simply upgrading them as much as the power source and hull allows.

Used for the transportation of passengers and light goods, as well as vehicles between planets and systems. Ferries are smaller craft but are larger than shuttles. Luxurious ferries are called Star Yachts. Asides from Star Yachts, their price driven up solely due to their target audience, ferries are around the same cost as Freighters, if not slightly cheaper.

Residence vessels are a catch-all term for various ships that have been retrofitted or modified for usage as a residential space. Often these are cheaper and older models of ferries and shuttles bought from scrapping zones, retrofitting current models being more expensive. When purchased, these vessels are normally heavily modified to suit the needs of the residents: Bedrooms, botanical gardens, even workshops and pools have been found on residence vessels. They normally have rudimentary and basic ship systems on board, if any at all. While ships maintain a costly investment, to those willing to pay the price, they remain a perfect investment. A small private place to call your own alone is tempting, but the promise of eventually fixing the vessel, updating it, and using it for contracts is a dream many ship buyers hope to fulfill. Megacorporations are always happy to expand their roster of freighters and transports. For the daring, the path to more illegal but lucrative jobs is always open. Stations with permanent residences, such Unity Station and the Odin itself have hangars full of people living communally within residence vessels. They are also popular within newly settled or poorer colonies across space or to form off the grid towns on developed worlds. These generally cost around the same as an equivalent motorhome.

While spacefaring vessels can be quite expensive for the layman, there are several factors that can make the bill less painful. The primary factor is what drive you have, bluespace drives being almost a lifetime investment for anything larger than a frigate, the average price for a functional drive for sub-Destroyer vessels being double the ship’s price, not to mention fuel costs. Warp drives are much cheaper, the best drives costing a quarter of the cost, compounded with not requiring phoron fuel, though buyers will have to keep in mind the additional need for cryogenic storages or good entertainment to combat the very long travel times. Capability of the ship to enter atmosphere or not can adjust the price, often larger starships themselves cannot enter a planet’s atmosphere to reduce cost, relying on secondary landing craft. Another factor that can severely reduce cost is having a crew, many hands making light work. Depending on what jobs the crew carries out, legal or otherwise, it is not unheard of for a crew to own even a Frigate. Any larger ships such as a Destroyer are typically staffed by specialist groups, military, corporate, pirate or otherwise. Only rich independent groups own a Destroyer, only the very rich or militaries/corporations own Cruisers. Other miscellaneous factors can be age of the vessel, group of manufacture, power source, source of parts (and their quality/amount, such as weapons, armament, energy shielding, sensors, etc), and how qualified the crew is to repair it themselves. Naturally, choosing to live aboard ones' vessel rather than owning a second home can help.