The SCCV Horizon undocking from the NTCC Odin for one of its first missions.

The SCCV Horizon is a prototype Cruiser-Class vessel designed to uncover Phoron - capable of doing such at distances never previously thought possible. Created by the Stellar Corporate Conglomerate, primarily by Hephaestus Industries and Zavodskoi Interstellar, the Horizon has been given several objectives that it ought to complete during its commission. While detecting Phoron is considered the primary objective, there also exists secondary and even tertiary objectives in which the crew of the SCCV Horizon must attempt to accomplish - examples of which are investigating potential colony sites for the expansion of the Stellar Corporate Conglomerate and the Republic of Biesel, as well as analysing deep space anomalies to uncover the mysteries of the Orion Spur, and hopefully unearthing additional information on why Phoron exists and why it has such a profound impact within the regions of which it is discovered.

The SCCV Horizon has two engines integrated within its hull, the Supermatter and the Tesla. Both considerably powerful sources of energy, are set up in a variety of ways so that they better suit the situation - being that of a ship that will have to travel dozens of lightyears in the near future. These modified engines have their own requirements, such as which gas to use to set up the Supermatter, and how to not create a rogue Tesla ball. These engines power the equipment located across the Horizon, and it is of paramount importance that at least one of them is functioning to ensure that the ship is not adrift within the Orion Spur - or even outside it. The ship utilizes a series of gaseous-fueled propulsion systems, powered through that of either hydrogen or phoron. Additionally, they will need refuelling throughout the vessel's journey - especially considering how far they may travel both in the Orion Spur, and the greater Milky Way. The Horizon is a first-generation hybrid, meaning it is constructed with both a Warp and Bluespace Drive. Implemented by the Stellar Corporate Conglomerate as a fallback method in the event that the ship is unable to acquire phoron for refuelling, the aforementioned engines of the Horizon will be capable of outputting enough power to fuel its warp counterparts.

Medical services on the Horizon are covered by plans included within the contract for SCC workers. Each contract covers that injuries sustained in the line of work such as a security officer being shot defending the ship, a engineer getting shocked while doing repairs, or a miner breaking a leg from a fall will have it be covered with a prepaid insurance program. These costs are cheap. However, injuries sustained off duty such as when the employee is off-shift will need to be paid for out of pocket. The costs increase depending on how much medical care was needed. A broken leg will not be pricey but being brought back from the brink of death will set a employee back months of pay. If a person is unable to pay these costs, they will be put into debt. The SCC offer contract extensions to help deal with said debt. Prosthetic repair is included in this plan but fees are included for implantation even if it was done for a work injury. Pre-existing conditions are not covered by this medical plan and billing will occur after the shift. Skrell of the Jargon Federation can have assistance from the Jargon Federation for paying bills. For Vaurcae, a higher fee is needed for the medical plan due to their unique physiology but the fees of all Vaurcae in a corporation are collectively purchased by their Hive. Owned IPCs have their damage costs paid for by their corporation while self-owned ones will need to buy into their corporation's warranty program. In this case, repairs are covered so long as the IPC continues to prove its value in whatever field it works within. A IPC lagging behind can be removed from the warranty program and thus be forced to pay for its repairs itself. Command members can enjoy reduced costs for the program while Captains will have all medical costs covered regardless if they were on duty or not.

The SCCV Horizon is outfitted with several decks, including that of an Occupational Deck. Taking up the majority of the SCCV Horizon, the occupational deck is outfitted with several departments, as well as other more miscellaneous rooms - including gyms, eateries, holodecks, and more. It can be reached through the residential deck elevator, as well as being thawed from the cryogenic arrays present across the SCCV Horizon. Included on the occupation deck are the departments of Medical, Security, Engineering, Civilian, Science, Operations and Logistics, and lastly Command.

The departments are contracted out as follows: 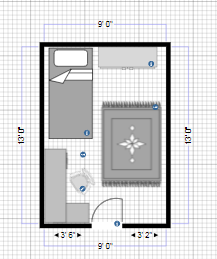 The floorplan of a singular Dormitory Room.

The SCCV Horizon was made in mind to be compact and frugal with its space. The residential deck is a minor exception to this. Realising the impact that living conditions can have on mental wellness (And in turn, productivity) the designers of the vessel made sure to provide the best comfort possible while also ensuring that the residence deck would not become a bloated mess. Narrow halls connect to bunkrooms with separated pods of bunks, one atop the other. There is a variety of rooms that those contracted aboard the SCCV Horizon are capable of selecting upon signing on, with dormitories being provided by the parent megacorporation of the employee. Anything higher is then deducted out of the respective employee's wages. Customization is allowed for rooms if the right paperwork is filed and it does not directly affect the SCCV Horizon's electrical or piping systems. The residential deck is outfitted with several cryogenic arrays in the event that an individual does not wish to utilize living arrangements. There are no entertainment systems, eateries, gyms or otherwise installed on the level. The crew are expected to use the facilities provided in the occupational decks above for those needs. Escape pods are the only evacuation method available to the residential deck, if the SCCV Horizon is in existential danger, the residential deck is not exempt from it. 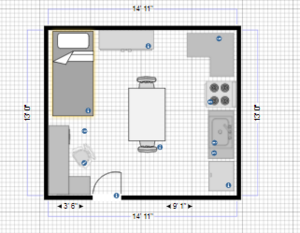 The floorplan of a singular Cubicle Room.

Dormitories: The entry-level room for those contracted aboard the SCCV Horizon. Employees do not need to have any funds deducted from their wages for dormitories. It can not house more than three items of furniture and is equipped with a compacted bed that is capable of being folded into the wall. Dormitories are often clustered together and lead into a communal living room - usually only outfitted with sofas, however, occupants of the dormitories are allowed to purchase "upgrades" such as additional recreational furniture (such as a holo-television). Dormitories do not have bathrooms, and those staying within them will be required to go to the communal bathrooms on the residential deck. 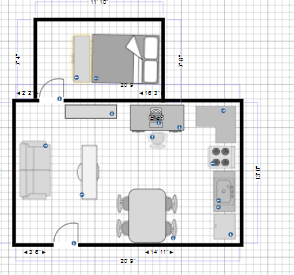 The floorplan of a singular Condominium Room.

Cubicles: One level up from dormitories, cubicles are essentially studio apartments. It has a single bedroom, and a kitchen, fused into a singular living space. It additionally comes with a compacted bed that is capable of being folded into the wall, similarly to dormitories. Cubicles are also clustered together and lead into a communal living room - which is considered more comfortable than the cheaper dormitories. Those staying in cubicles share a communal bathroom with their adjacent neighbours in the communal living room. The rent for these rooms will be deducted from an employee's wages - a cargo technician would be able to comfortably afford a Cubicle.

Condominium: A rather expensive room, Condominiums are designed to cater to couples that wish to share a singular room. It has additional room for furniture, and an attached bedroom with a compacted bed that is capable of being folded into the wall, as well as the attached wardrobe. Much like the aforementioned rooms, condominiums are also clustered together and lead into a communal living room - however, the clusters are much smaller than their counterparts. Those staying in condominiums share a communal bathroom with their adjacent neighbours in their communal living room. The rent for these rooms will be deducted from an employee's wages - only an individual in Science, Engineering or Medical departments would be able to just afford a Condominium unless two or more people agree to split the rent. 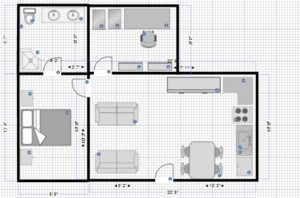 The floorplan of a singular Corapt Room. 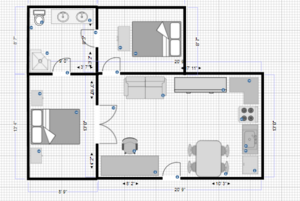 The floorplan of a singular Family Corapt Room.

Corapt: Corapts, or Corporate-Level Apartments, are one of the most expensive living arrangements on the SCCV Horizon. However, the rent is heavily discounted, and sometimes free, to high-ranking megacorporation staff such as those in Command. It features an attached bedroom, ensuite, as well as a separate office. Similar to the aforementioned living arrangements, Corapts are clustered together. However, Corapt clusters are considerably small, oftentimes having only 2-3 rooms sharing a singular communal living area. Only high-paying careers will be able to afford a Corapt unless an individual has an additional means of income.

Family Corapt: Family Corapt, or Family Corporate-Level Apartments, is the most expensive living arrangement on the SCCV Horizon. Similarly to the Corapt, the rent of the room is heavily discounted, and sometimes free, to high-ranking megacorporation staff such as those in Command. It features two attached bedrooms, sharing an ensuite. It does not come with a separate office, however, per arrangement the customization of the room is permitted to add an additional separate office from the main living room. Family Corapts are not clustered together and are equally spread throughout the residential deck. Only high-paying careers will be able to afford a Corapt unless an individual has an additional means of income. Additionally, the rent can be split between two or more individuals to lessen its impact.

Floorplans presented here are considered the default ones. You can change them to include or exclude furniture, as well as rearrange said furniture. An example is perhaps replacing a bed with a bunk bed, or replacing a desk with a single bed. Structural changes can also occur, but be reasonable and attempt to stick to the aforementioned structural descriptions above. Additionally, the measurements presented are not accurate, and should not be used as a basis of measurement.