The Contact War was a massive global conflict that took place on Moghes and fought exclusively between Unathi, and it created many Notable Unathi in its wake. The war lasted from 2437 to 2449. The fighting was between two global powers, the Izweski Hegemony, and the Traditionalist Coalition.

The Izweski Hegemony had a long history of condescending and patronizing attitudes towards its neighbors. As a global superpower it regularly and eagerly intervened in the affairs of other Clans and Kingdoms outside its borders. Many even within the Hegemony felt the Izweski were naked despots who would sacrifice any form of honor code or creed in the name of solidifying their own power.

When the Sol Alliance and Jargon Federation officially contacted Moghes and worked on uplifting the species it was done exclusively through the Izweski. These same anti-Izweski factions came to fear a future where a technologically powerful Izweski, backed by alien invaders, would brutally enforce a One World Government and destroy all concepts of Unathi tradition and honor.

In 2433, a human exploration team discovered Moghes. Shortly after, first contact was made. Sol Alliance merchants and scientists flocked to Moghes, living under very careful observation and guard in Izweski cities. Skalamar, the second largest city in Izweski, became the first Unathi city to have a shuttleport constructed. Owned by NanoTrasen, it served to transport people to and from the planet’s surface.

The Izweski claimed to speak for Moghes, and the difficulties in the early-days of human xenolinguistics had Sol and Skrell scientists taking the concept of the "Hegemony" extremely literally. Believing that Hegemon S’kresti Izweski spoke for all of Moghes, private and state businesses were done exclusively through him and his Clan, even if the business affected land or people outside Izweski borders! In most of these instances the Izweski had its vassals send out soldiers to enforce demands placed on the foreign populations.

Shrewd political maneuvering by the Izweski Clan saw the introduction of the Extranet to Skalamar by 2434, though access was extraordinarily stratified to the upper echelons of the Hegemonic government, which reflected the massive economic disparity between the upper and lower classes of the Izweski Nation. With the unprecedented access to the sum collection of all human and skrell knowledge at the time the Izweski were able to begin creating bootlegs of human and skrell technology based on information gained via the Extranet, or otherwise gained in-depth as a result of various treaties or trade deals between them and galactic powers.

By 2435 this resulted in the first fusion power plant being opened in Skalamar after rushed commissioning and construction. Operated by the Yuitiz Guild, which was the dominant monopoly of the Izweski energy market. The Yuiztiz Fusion Plant had a capacity of 30,000MW of electricity, compared to most Moghean Natural Gas power plants that had a capacity of 5,500MW.

Needless to say, the global energy market collapsed as energy Guilds began to realize they would become irrelevant within a decade at most. Ironically the price of electricity skyrocketed across Moghes for years as fusion power became a reality and utility Guilds went under, whereas after a brief few months of fluctuations the Izweski found themselves achieving full energy independence until the conclusion of the Contact War.

Over 100 world leaders attended the world summit called by King Don'zai Azarak, including representatives from the Izweski Nation. Two representatives from the Sol Alliance and Jargon Federation came to observe, which the Izweski had demanded in return for their attendance. There was no precedent for such a summit of world leaders, which reflected the near universal apprehension and anxiety Moghes was going through over the growing power of the Izweski.

Azarak opened the summit with his infamous 'Broken Oaths' speech. In it he took on firebrand rhetoric, claiming the Izweski to be puppets of alien invaders who possessed 'false smiles and unknowable minds'. He blasted their condescending attitude towards the rest of Moghes, pointing out that the Izweski had turned the entire world economy into an unstable train wreck in their flagrant and unchecked proliferation of alien technology. He blasted the Izweski for their imperialism, claiming they desired to create a One World Government run exclusively by the Izweski family and their human masters, and famously ended his speech by proclaiming 'The Izweski founded their Hegemony on broken oaths! Will we allow them to break us like they broke the bodies of the Sarakus? They come with arms outstretched in friendship, but their intention is to reach out and snap our necks!'

In 2437, the Izweski Nation had established the Izweski Space Program, and with bootlegged Sol Alliance technology constructed a rocket intended to carry 300 unathi colonists to their system’s second habitable planet, Ouerea. The launch was a disaster, with a yet-unidentified failure causing the rocket to explode after reaching 2,000 feet and the death of all hands. The failure sends shock waves through all of Moghes, with the Izweski Nation suddenly besieged by scattered, angry neighboring Clans. Anti-Izweski Clans and kingdoms were outraged by the unnatural use of technology leading to the loss of so many lives, as well as the apparent indifference of the Izweski to the disaster.

The Sol Alliance partnered with the Jargon Federation to help Izweski construct a second rocket, with NanoTrasen engineers and scientists helping construct it. Its launch was successful, and Ouerea was colonized by 350 Unathi under the guidance of the Sol and Skrellian Alliances on February 3rd, 2438. This successful colonization caused panic and alarm outside the Hegemony. With the world's sole superpower now becoming an apparent space-faring power, Sinta'Unathi knew that it was only a matter of time before the Izweski became unstoppable, backed by alien overlords and the full wealth of the solar system.

The universal panic and outrage made the usually divided and segregated Clans and nations of Moghes united in purpose. Nearly universally all non-Izweski clans formed or joined the Traditionalist Coalition, which invaded the Izweski Nation. Officially their reason for war was to liberate Moghes from the Izweski and xeno invaders, while their other goals were the destruction of the Hegemony and a return to the traditional ways of life. The Izweski themselves began to see civil unrest from angry commoners, while Lords dissatisfied with the rapid pace of modernization began defecting, taking their soldiers with them.

The violence lead to the catastrophe conflict now known as the Contact War, which began with the sudden invasion of Izweski lands east of Res'karum three days after the Izweski Colonists landed on Ourea.

Humans and Skrell evacuated the planet as the fighting got underway.

The Coalition fought as its clans always had, with steel weapons and hand-to-hand combat. Many upper-class Traditionalist clans utilized Hegeranzi as a Moghean version of feudal knights. The biggest concession was the use of ballistic weapons and heavy artillery. The Coalition also used propeller-based bombers and fighters which they used to bomb Izweski targets.

The Izweski used Skrellian and Human energy weapons like energy glaives, swords, and laser carbines, as well as fielding several hundred Mk I “Breacher Suits”, which the Izweski nation invented and utilized to frightening efficiency. Izweski Lords were stubborn against creating an air force beyond the Sky Behemoths, and progress did not advance on that front. 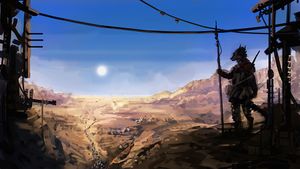 The Izweski Nation finds itself struggling to accommodate refugees trying to escape the growing Wasteland.

Many Unathi on both sides faced serious and upsetting decisions in which they had to weigh the safety of their soldiers and vassals along with the success of their operation against ancient Unathi customs of honorable warfare that had held more or less firm for thousands of years.

One notable constant was the lack of large-scale attempts by either side to engage in naval warfare; the Moghresian sea saw limited privateers or skirmishes, but both sides shied away from focusing on the sea, fearing mutual famine if they targeted Guild fishing fleets.

Coalition ground troops tended to be butchered en-masse by the Izweski Breacher Suits, which could absorb laser and bullet fire similar to Terran tanks. In response Coalition Lords began adopting heavy artillery to shell Izweski positions on top of air bombings, to which the Izweski were slow to respond to. Coalition tactics tended to favor viscous, ruthless offensives.

The Izweski proved effective on the defensive, with a handful of Breachers able to cut down entire platoons of Coalition forces. But the Izweski lacked a cohesive air force, and many stubborn Lords refused to utilize indirect warfare such as artillery or air support, leading to higher casualties and a greater difficulty in offensives. Their focus on infantry warfare also meant they were slow to advance, leaving the Izweski military, while nearly unstoppable when fully mobilized, extremely slow to advance.

Reactions To The War

The war was portrayed in Izweski propaganda as a war against backward savages. Unathi from the Traditionalist Coalition were 'dehumanized' and people were told to consider them as barely Sinta'Unathi. Many Izweski Unathi feared that the Traditionalists wanted to destroy modern society itself.

The Izweski were portrayed by the Traditionalists' propaganda as alien collaborators. The Izweski were painted to be oppressive puppets to the humans and Skrell, forcing literal alien culture on Moghes without the consent of its population. Many sincerely believed that the Hegemony was threatening the very foundation of what it meant to be Unathi, shaming their ancestors or having lost the favor of the Great Spirit.

The Jargon Federation found itself shocked by the violence unfolding on Moghes. They dispatched a cruiser to orbit over the planet, and transported down a peace delegation to the Coalition capital city. The shuttle was shot down by Coalition anti-air weapons, killing everyone on board. Offended, the Skrell moved their cruiser in the system in orbit around the Ouerean planet, pledging to never again provide assistance to Moghes, while NanoTrasen continued to do just that with back-room dealings and weapons sales. 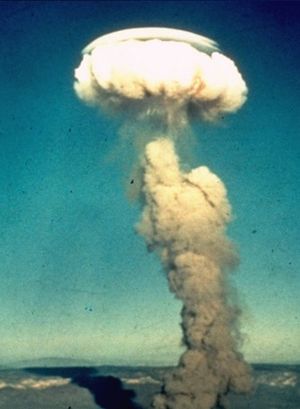 It's unknown how the Coalition acquired atomic weapons, but many conspiracy theories persist.

On September 5th, 2439, the Traditionalist Coalition suddenly dropped an atomic bomb on the Izweski city of Da’ha’den, obliterating it. It’s unknown how the Traditionalists gained access to atomic weapons, but the consequences were catastrophic: both sides began a continued exchange of atomic weapons that lasted for a week. Hundreds of nuclear weapons were detonated across Moghes, and orbiting, observing Alliance stations and vessels having their shutters lowered to prevent eye damage to people observing during the time of the exchange. Hundreds of millions of Unathi were killed within the first few days by direct atomic detonations alone, with hundreds of millions of more Unathi dying as the weeks dragged on and the fallout spread across the planet.

In the end, atomic hellfire had seen most of the planet's surface vaporized or blasted with radiation. Despite this, violence continued to spill across the planet as the initial war of ideology turned into a desperate fight to secure the remaining, non-affected areas. The continued conflict continued for 10 more years, with every level of Unathi society affected in one way or another. No clan escaped unscathed, and many lost their entire levy or even their entire dynasty when the atomic weapons were dropped.

The Contact War did not end until exhausted Izweski forces captured the Coalition capital city of Darakath on 2449, which had been their relocated capital after the original, Tisxaclas, was destroyed by several atomic weapons. The capture of the city also marked the end of the Contact War, with the Izweski technically victorious in the face of there being no further organized resistance against them on Moghes.

In retaliation for the war crimes preformed by the Traditionalists, being the atomic detonations and multiple other accusations, every single Traditionalist leader was decapitated over the next few months, including the entire Azarath dynasty. At the start of the war the population of Moghes was 8 billion, and by 2458 it stands at 6.2 billion.