Starting in 2015, the lore team started the living lore project with a goal of making the lore feel alive and dynamic. The status quo of species were changed or reinforced through many story arcs presented through news articles. These storylines played out over many days and several had a direct impact on the station.

A brief summary of the storyline for the Unathi is here.

Technically spacefaring, the Hegemony never had time to build a fleet before the Contact War caused Izweski attention to collapse inwards. But in June of 2457, all of that changed.

On June 2nd the S’kresti Izweski announced amnesty for all Unathi raiders in the galaxy if they came to Moghes and swore fealty. Several ships accepted the call, and overnight the Unathi had a small, rag-tag fleet that began to grow in size. 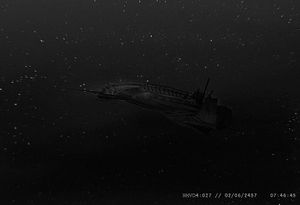 One of the first vessels to answer the call, the HMV Cataclysm became a namesame for the later class of super-dreadnaught.

Destruction of the Daedalus and Response

On June 3rd the frigate NMV Daedalus was attacked and destroyed by an Izweski vessel, which rammed it and boarded it to seize the ship and crew before scuttling the ship. In retaliation NanoTrasen completely shut down their infrastructure in Uueoa-Esa space. Within hours Uueoa-Esa had lost the majority of satellites, shuttleports on the surface shut down as the human staff left, and the bluespace gate for the system itself was shut off.

On June 4th the Sol Alliance the Prime Minister Michael Douglas held a speech condemning NanoTrasen's response to the Unathi crisis. Immediately after the speech there was a vote of no-confidence, ousting the Prime Minister, his cabinet, paralyzing SolGov and making it hard to respond to the seizure of a NanoTrasen telecommunications satellite in orbit of Moghes.

On June 23rd Hegemon S’kresti Izweski used a seized NanoTrasen t-comm satellite to broadcast his agenda of expansion for the Hegemony, as well as demanding the return of the Ouerean colony back to Unathi officials. Ouera was jointly administered by the Jargon Federation and Sol Alliance at the time, who originally ignored the demands. Jargon even warped four extra frigates in orbit of Ouerea to ensure the safety of its citizens on and around the planet.

On July 5th Unathi launched a surprise attack on a Skrell flotilla in orbit of Ouerea. With the element of suprise a Unathi ship managed to ram a Skrell cruiser before they returned fire. After a brief skirmish the Skrell retreated while the Unathi lost 12 ships and captured a Skrellian vessel. The Skrell assembled for crisis talks, but a response was slow to form due to a Dionae leading the response.

On July 7th newly elected Alliance Prime Minister Chater announced he was ceding Ouerea to the Izweski, deeming the planet not worth the loss of lives in an actual conflict. This lead the Hegemon to name Tarkart Yiztek as Overlord (King) of the planet.

On July 12th Jargon ceded the planet in exchange for all Skrell prisoners being returned, also not wanting to lose valuable lives and resources to defend Ouerea. The Jargon Federation also cut all ties with the Unathi, taking on a dismissive and cold stance to the Hegemony that would not be repaired until the eventual ascension of Not'Zar Izweski.

Hephaestus Industries was quick to swoop in and fill in the void left by a withdrawn NanoTrasen. On the 19th of July they announced a partnership with the Hegemony, and laid the groundwork for a tightly woven relationship between the Hegemony and the mega-corporation.

Defending From the Cult Menace and the Failed Coup

We Will Conquer (The Wasteland)

The Launch of The HMV Catastrophe

Not'zar Izweski is solidifying central control by creating an entire class of officers and warriors who do not come from the high nobility, but the peasant classes. Because of the hostility of the High nobility towards these upstart peasants, these cadets need to be loyal to Not'zar Izwseki and the Izweski dynasty in order to retain their status and even survive. In many cases it is similar to the logic of the Guwan Guard.

The Emergence of the Aut'akh

The arrival of the Aut'akh was a huge shock to Moghes. The High Church, under Unzi, and conservative Lords immediately moved to destroy the heretics that are the Aut'akh. However an expedition made by the Church, with volunteer levys, were soundly defeated in a decisive battle. Not'zar Izweski exploited this to maneuver to decree that the Aut'akh may live. However, he balances this with a continued blockade that prevents the Aut'akh from leaving. Many express confusion as to why Not'zar is siding with the Aut'akh instead of the Church. But Not'zar Izweski understands that if High Priest Unzi were to secure prestige and power from a second successful Iron Crusade, he would effectively dwarf the power of the Izweski dynasty. Not'zar Izweski, attempting to avoid the mistake of the Iron Crusade, is undermining the Church and showing that he still has power over it.