The Trade Guilds of the Hegemon are powerful organizations surrounding certain skills, or trades. Found in every city, these guilds operate out of Guild Halls, and skilled workers often join certain guilds to rise from peasantry into a higher social caste. It is much easier to join a guild if your Clan has been in the guild in the past - otherwise, joining a guild is slightly more difficult.

All cities are connected by the Merchant's Guild - and by its gold. 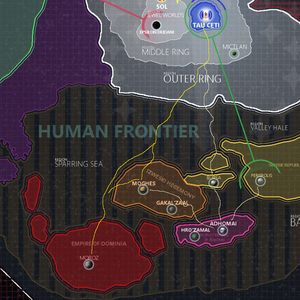 "Any Sinta finding work, will find it through me. Tau Ceti needs high-skilled laborers, strong workers, craftsmen and guildsmen of Moghes. Praise the name of Clan Razi when you find work with xenos." - Guildmaster Razi, first trillionaire Unathi.

The most powerful guild is the Merchant’s Guild, headed by Guildmaster Keicacu Razi, is most well known for popularizing Razi-snacks outside of Sinta space. With hundreds of years of ancestry, the Razi guild has been a powerful ally to Hegemon Not’zar Izweski, who has taken a liking to Guildmaster Razi’s daughter Hizoni.

The Merchant’s Guild has managed to create and sustain a trade route from Moghes to Tau Ceti, this route being known as The Imperial Route. Competing with Dominian merchants, the route is known to have minor scuffles and skirmishes between the two nations. As well, the Merchant’s Guild is one of the only guilds with enough credits to sustainably have cargo shuttles off Moghes, meaning that other guilds have to go through them to sell to xeno civilizations.

In Tau Ceti, the Merchant's Guild has constructed the largest guild hall in existence. Other guilds from Moghes can rent housing and space in the Grand Guild Hall, where hundreds of guilds attempt to have an influence in human space. Due to Nanotrasen's grip on the economy of Tau Ceti, guilds have a hard time finding work anywhere other than under Nanotrasen.

The Imperial Route - The Imperial Route is a bluespace lane contested between the Dominian Empire and the Izweski Hegemony, directly towards Tau Ceti - the two empires greatest connection to the rest of the galaxy. As both galactic nations have troubled diplomatic relations with each other, it is almost a constant skirmish when two opposed merchant escorts come close. Small-scale starship battles happen semi-frequently as almost every merchant has to defend their goods from enemy privateers.

The primary logo of Hephaestus Industries.

Unathi have often viewed Hephaestus Industries as one of the only honest corporations in the galaxy - whether it be simply the fact other corporations had once chance and failed, or a simple preference of aesthetic. Hephaestus is the only corporate entity allowed to operate in the Uueoa-Esa system, with other corporations like Nanotrasen only being allowed recruitment facilities.

Titanius Aeson, the CEO and head of Hephaestus, is heavily loved among Unathi workers - being a huge muscular man, both men and women love him and his sheer strength. A booming voice and infamous love of cigars contributes to Aeson’s reputation as a literal titan of industry. Aeson’s status as a man that rose from the ranks is why the modern Hephaestus Industries is viewed as one of the better companies to work for in the engineering sector, with significant benefits being given to retain workers and ensure even hazardous work is done.

Although not heavily centralized, the most populous guilds are the Laborers Guilds which often are restricted to lower-skill manual labor. There are often dozens of guilds in a city for different trades, from the Plumbing guild to the Barkeeping guild. The largest organized laborers guild is the Order of Stone Mining Guild, which has guild halls in every major Moghesian city.

Often, since these laborer guilds are local, they are run by the clan most well known for that trade in the area. Sometimes small guilds will come together to form a larger guild, and have a shared guild hall. For example, the ‘Construction Guild’ may have several small guilds inside it, such as the plasterer’s guild, bricking guild, and electrician’s guild.

The Bard’s Guild is one of the most prestigious guilds to be a member of, with a heavy focus on poetry, music, and writing. Historically, the Bard’s Guild is known to only take in Nobles, however for every 50 nobles there is often 1 especially talented peasant allowed to join. The Bard’s Guild hall is located in the Noble District of Skalamar, the Izweski capital, and teaches traditional poetic thought.

The Bard’s Guild is most popular for learning all Lore of the Unathi, notable enough to make songs and poetry of any Unathi worthy of a story. The Bard’s Guild has sparked controversy over releasing an epic on the life of Juzida Si’akh - of whom is thought to have cursed the previous Hegemon before his death.

The House of Medicine

The largest aquaculture guild in the Untouched Lands, the Fishing League is a primarily Sk'akh guild that follows the Aspect of the Fisherman. Although the Sk'akh faith is often seen as higher-class, the Fishing League is one of the best places for worshippers of Sk'akh in the lower classes to become notable - spiritually, and societally.

A pillar of the Unathi’s tradition in dueling, the Duelists Guild has excelled in keeping healers, meal preppers, and entertainers staffed in their Arena Halls. The guildmembers of the Duelists Guild can range from being a professional Duelist themselves, to a simple cook that preps feasts before a big fight. Professional Duelists are an interesting aspect of Unathi culture - selling off their skills as a Warrior to a Noble or wealthy individual that’s planned a duel, and then fighting to win - or take the fall!

Tournaments are held in the Arena Halls of cities often, having professional Duelists, popular Warriors, or upstart peasants looking to make a name for themselves come into dueling matches against each other. These tournaments do not often result in death, since they’re simply for enjoyment - however the possibility for a bloody accident is what draws in a crowd.

The Duelists Guild has the honor of hosting the Zandaziite Games, and being the place where almost every single Zandi duelist began their legacy of action!

Popular duels are often broadcast to public screens across a city, and even women and children find enjoyment in watching them.

Criminal Guilds are seedy, underbelly guilds often run by secretive clans of Unathi. Similar to human or tajaran ‘mafias’, these criminals have come together to operate outside the law. Notably, it’s known that these criminal guilds tend to recruit from the undesirable Guwan, using them as the major workforce of their organizations.

In these underbelly Guilds, Guwandi are seen as a weapon of ritualistic - and honorable - assassination. When a member of the Guild goes against the Guild’s wishes, they are assumed to have taken the mantle of Guwandi, making them a target for other Guwandi that wish to restore their honor and ‘return to the guild’. This method has helped keep snitching on the Guilds to a minimum.

The largest organization of thieves across the Untouched Lands, the Shortclaw Clan or Shortclaw Guild is infamous for having pulled off one of the most wide-scale thefts in Unathi history. In the year 2459, the Shortclaw Clan had every member, assumed to be in the thousands, all steal from thousands of clans across Moghes, Ouerea, and even some thefts being reported in Tau Ceti. This mass-theft is known as the Day of Gold by the Shortclaw, and the main focus was to steal ornamented weapons, armor, and jewelry from Nobles.

Originally a small group of Guwan pickpockets in S'th, the Shortclaw Clan has expanded its 'gang' large enough to be considered a formidable organization - although a raggedy one. Ranging from small-time marketplace grabs to sneaking into Lord's halls and mansions, the life of a Shortclaw is extremely loose, with no home to tie you down. When moving from city to city, a Shortclaw can often find a fellow member by a single regular sign - either clipped claws, or a small wooden ring made to fit around the pinky.

"The assassins of the Shadow are the claw at the end of a Noble's finger. Simply point, and they will honor their contract." - The Shadow Service Headmaster.

There are only whispers of scared Nobles - ones who know of the Shadow Service's 'services'...

The Shadow Service is one of the larger underbelly guilds that does not use Guwan - instead, using hidden members of society or Guwandi who wish to regain their honor in a noble assassination duel. Utilizing a form of Unathi Breacher Suit, they are rumored to be capable of using active camouflage to be completely invisible. It is frowned upon by the Shadow Service to use this stealth capability for battle, and the enemy should always know they are being hunted by a member of the Shadow Service, and for what reason.

The Shadow Service is one of the most gender-inclusive Guilds in Unathi society, with a perfect 50/50 split in men and women. As men harming women is seen as disrespectful, dishonorable, and downright terrible, the Shadow Service contracts women to kill women, and men to kill men. Depending on the situation required, the Shadow Service is said to send in a 'noble Assassin' to complete the task. If the target is believed to be honorable, the assassin must act honorably - however if they have shown any signs of dishonorable act, they are open grounds for all out hunt. Acting honorably does not mean giving a fair fight, however - and many of these duels have been known to end in a single blow from the assassin.

Publicly, 'assassins' are known to exist - and tales of the Shadow Service circulate similar to the human 'Illuminati' or the skrell 'Secret council'. Peasants would have nothing to fear - with some even idolizing the stories of 'honorable assassins' that enact righteous justice through heavy-handed, forced dueling. Richer noble clans would have a different view - one of fear, dangerous enough to warn their children about. It is said when a nobleman expects a visit from the Shadow, they will receive warning beforehand to allow the target to prepare to join the ancestors. When a woman is targeted by the Shadow Service, a female assassin will be sent instead. With killing women, they are held to a higher standard, and their body should be left 'presentable' enough for a proper traditional Th'akh funeral.

The Shadow Service is expected to be one of the oldest non-politically aligned guilds on Moghes, believed to have existed 1500 years ago. Primarily thought to be Th'akh, media has portrayed the Shadow Service as rampant blood-worshiping cultists.