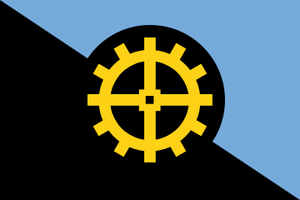 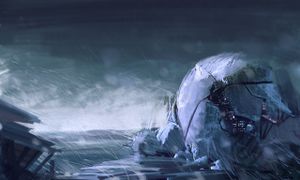 New Gibson is the second exoplanet to be colonized by humanity, shortly after the initial success of Biesel's colonization attempt, in 2167. While the economic and social powerhouse established itself on Biesel, New Gibson was set to become the industrial powerhouse of the Tau Ceti system. New Gibson contained a rich and valuable resource pool together with the highest concentrations of many valuable minerals of any planetary surface in Tau Ceti, in the form of highly concentrated ores. Highly sought after especially for the continued development of Biesel's fledgling colony at the beginning of it's life. After the 2452 declaration of independence, due to the massive economical recession the Sol Alliance was suffering from, New Gibson became an independent planet under the wing of the Tau Ceti Assembly, it currently has a representative on the State Senate in Mendell City. It's industrial output shifting from Biesel to accommodate a larger platform of corporations and interests. Currently Nanotrasen owns a staggering 1/4th of the industry capability of the planet together with owning a sizeable stock majority of the planet's capital domed city, Hengsha Arcology. The Hengsha Arcology, or simply Hengsha, is a self-contained complex mimicking the landscape of Biesel, complete with parks, waterfalls and wildlife. This was not only due to New Gibson's extreme cold weather with permanent twilight days and nights but also because the colonists, and by extension the workers, would feel much more comfortable and be more productive in an easily recognizable, friendlier, environment. Almost 1/4th of the population is hired by Nanotransen, and almost all of the families living on Hengsha are considered middle-class, with the wealthy families preferring to live on the more lush Biesel and the lower class being forced to work in more unfortunate conditions. While New Gibson has a complex dedicated to virtually all industries, from personal grooming equipment to advanced AI components, it's major industries are shipbuilding, construction materials, enterprise-scale medical equipment and electronics. NanoTrasen operates a salt mining facility on the planet, with rumors by workers alleging purposefully poor working conditions.

The atmosphere of New Gibson is composed primarily of methane, ammonia and trace amounts of water vapors, with temperature ranges from minus 243 degrees Fahrenheit (minus 153 degrees Celsius) to minus 370 F (minus 218 C). The upper regions, North and South poles respectively, being the coldest locations. On rare occasions radiation from Tau Ceti's sun and from space infrequently heats the stratosphere of New Gibson from minus 370 F (minus 218 C) to minus 243 F (minus 153 C).

The gravity of New Gibson is slightly heavier than Biesel's and it has a magnetic field protecting it from cosmic rays and solar storms, though not completely. New Gibson is enveloped in perpetual twilight.

New Gibson's weather is characterized by frequent very high wind speed snow storms. The snow storms are frequent, however once in a while New Gibson allows it's weary plains (and inhabitants) a rest with a long, if not quite welcomed, mild snowfall. Any outside contact must be kept within RIG EVA procedures, and EVA is strictly prohibited during the snow storms duration.

New Gibson is characterized by huge snow-covered valleys, large solitary mountains (including Mount Tian, the mountain where Hengsha is constructed on), frozen lakes (or oceans) and vast frozen ice caves, the largest of which (discovered) is found at the Blue Mesa outpost.

No animal life has thus far been registered as far as the explorer vehicle drones have noted. This is probably due to the very hostile nature of the planet's weather. As with the fauna, the flora is non-existent.

New Gibson has a total population approaching three million, most of which are human. However due to the constitution guaranteeing the rights of "free travel" and "open immigration" the planet's population is constantly fluctuating, having a slowly rising population of alien inhabitants, especially Vaurca from the Scay’extiih’aur brood who primarily maintain state-sanctioned kois farms across the planets biodomes and outposts. The brood also maintains a large cavern just outside of the Hengsha biodome that continues to grow deeper to this day. About 3/4ths of the population is primarily concentrated in the capital city, Hengsha. There are numerous very small outposts outside of the capital city, and only one slightly large environmental complex, located and constructed in a system of large ice caves to the North of Hengsha, called Blue Mesa.

Hengsha contains the largest, most up to date industrial complex ever constructed, integrated and dug in the large mountain on the side of which Hensha resides, Mount Tian. This large complex represents the heart and soul of the many operations on New Gibson. NanoTrasen has bought many of the ports, construction firms, welding industries and other similar industrial firms, although the complex still contains a sizeable amount of independent and Assembly owned firms. Furthermore, Hengsha has its own academy called H.A. Wallace Space Academy, boasting an impressive number of industrial based studies and specializing in EVA operations. Named after Henry Arthur Wallace, the scientist and engineer who designed the Hengsha Arcology project.

Blue Mesa, the second largest outpost in New Gibson, is a Nanotransen owned research facility (presumably), it is built similarly to New Gibson but in a modular fashion to allow extensions or "rearrangements" of departments. It's located in a system of large ice caves which span for many miles (kilometers) relatively close to Hengsha.

Xerxes Biodome contains the larges portion of the Scay’extiih’aur workers, which houses the New Gibson hive-net relay. For more information on Scay’extiih’aur and her brood, please see Vaurca.