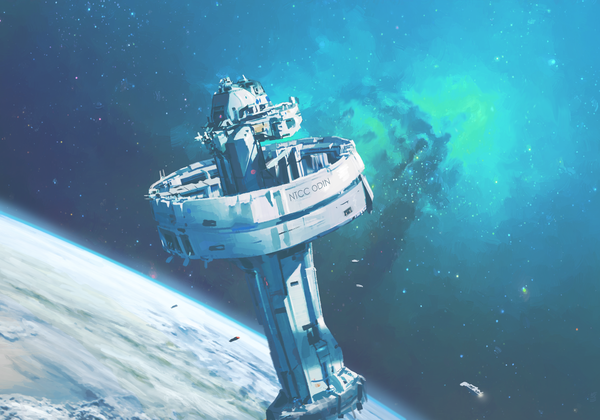 The NTCC Odin, floating in space.

The Odin consists of three arms surrounding a command spire: The residential block, the industrial block and the commercial block. The residential block contains housing, shopping and leisure facilities with accommodation ranging from simple hab sleeper booths to luxury apartments. The richest district of the residential block is known as "Archway" for its faux stone facades and is home to many corporate executives and senior members of NanoTrasen. The Industrial block contains various phoron and materials refining facilities alongside ship maintenance blocks. Space is at a premium on the station so it is known for small storage rooms to be sub-let within the district. This practice has formed one of the poorest areas on the station - the "Refinery Block". Those not wishing to rent hab sleepers yet possessing insufficient credits for a box apartment can find cramped, grimy but affordable housing here. The commercial district contains various NanoTrasen commercial departments including key corporate offices and NanoTrasen's local Extranet. Station Security (Civil Protection) is headquartered here.

At the head of the command spire is located Tau Ceti's NanoTrasen Emergency Response Team (ERT) Command and facilities; this includes private docks for ERT vessels, armories and living quarters. At the base of the command spire are the station's docking facilities, with the lower berths serving the numerous heavy freight and mining vessels that traverse Tau Ceti and the upper serving as private dockland that services various ships ranging from luxury cruisers to system transports and junk barges. It is not unknown for some of the station's citizens to live within their personal spacecraft to avoid paying rental fees for station accommodation and only having to pay dock rental fees instead.

The station defenses are split into three systems: The first defense system is two private military frigates permanently stationed at the Odin - NTV Diewana and NTV Ogun, the crew of which is drawn from staff on rotation from the Odin. When in Sol Alliance space they are both licensed under Private Military Vessel Licenses (PMV). Both are capable of Atmospheric Operations. As a second defense system, the station itself is ringed by state-of-the-art point defense laser systems and an array of artillery canons. Whilst serving as one of the station's defensive measures, the weapons array can also allow the station to function as a Battle Cluster Defense Station for Biesel if it were required to do so. The third defense system is the paramilitary ERT teams supplemented by equipment enhanced Civil Protection units which can be deployed to repel borders or maintain the peace on the station in times of extreme civil disobedience.

The "outdoor" residential and commercial zones have a standard temperature of 25 degrees celsius with a light breeze. The Industrial districts and interiors have a variable temperature depending on the activities within.