Motto: “Guardians of the Revolution.” 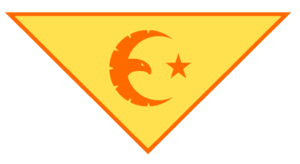 The flag of the Serene Republic of Elyra

From its inception as a nation, the Serene Republic of Elyra has required an armed force for the protection of its borders, people, and interests, culminating in the modern-day Elyran Armed Forces or EAF. Both currently and historically, the EAF has focused on a doctrine of versatility and mobility, with the defense of Elyra’s borders and people within as its number one priority. This approach has led Elyra’s armed forces to be much smaller than their contemporaries like the Sol Alliance, the Empire of Dominia, or the Coalition of Colonies, but still a force that has, until recently, perfectly served the needs of the Elyran people. Much as their doctrine of versatility implies, the EAF is a force that can fill a variety of roles for the Republic on very short notice. Disaster relief, anti-piracy operations, border control, search and rescue, evacuations, policing, and indeed border defence are all under the purview of the duties ascribed to the organization. Since its inception, it has always been a small force primarily concerned with national defence rather than power projection. It has a special place in the Elyran state and national culture as it was founded from the colonial garrisons that rose up against the Solarian Alliance during the Elyran revolution. Since then, it has not only been the country’s armed forces but entrusted to be the last line of defence from internal tyranny in the Republic, and as such, it is respected greatly by the general public. The armed forces have the authorization to remove the Prime Minister and dissolve the Republican Assembly while setting up new elections if they believe that unconstitutional or tyrannical powers have taken hold of the government, though this has never happened in Elyra’s history as a nation. The structure of the EAF is a hybrid model between conscripted personnel and professional career soldiers. Every Elyran citizen must serve a one-year mandatory term of service after they have graduated from secondary school, however those that serve this time are typically only assigned to non-combat roles that handle duties regarding logistics, communication, and other support functions. Only once has Elyra called conscripts into frontline service, and that was during the Lii'dra Incursion. The resulting astoundingly high casualty rates among Elyran conscripts in the conflict has ruled out the possibility to many that Elyra will ever pursue this kind of strategy in the future.

Elyra’s active combat troops are currently all professional soldiers that have signed on to serve terms, starting at three years and increasing upwards, as front-line, combat capable warfighters with conscripted soldiers serving in non-combat roles. Conscripts are sent to the branches where they are needed most, however a volunteer soldier has some agency in deciding which branch they wish to serve in. After a conscript’s service is over, they are discharged and released back into civilian life with many attending university or finding jobs afterwards. After an Elyran regular soldier finishes their term, they are given the opportunity to renew their contract with the EAF, often with the incentive of promotion, or are given the opportunity to instead resume civilian life while spending limited service in the Elyran Armed Forces Reserves for at least three years. Because of this system of both conscription and volunteer service, the Elyran Armed Forces have a large number of personnel available to them for relief, humanitarian, and support functions, yet their number of troops that are sufficiently trained and equipped to participate in combat actions are the smallest of any majority-human nation in the Orion Spur. Aside from the initial skirmishes of the Elyran Revolution, the Elyran Armed Forces have never fought in an officially declared war and is broadly considered to be the least experienced armed forces of all the human powers in the Orion Spur. The EAF is also currently trying to rebuild its prestige internationally after being humiliated by the Lii’dra Incursion of 2457, a conflict which killed roughly 40,000 Elyrans in just two weeks and only ended after the intervention of the Jargon Federation’s Kalaala in the conflict as part of an exchange for phoron.

The EAF is divided into two main branches, the Army and Navy.

Elyran Army "For Greatness, we standfast"

The Elyran Army is a planetside-based force focusing on mechanized and motorized formations to permit them to swiftly react and adapt to situations as they unfold. Their main task is to garrison Elyran territory and to be ready to mobilize at a moment's notice to meet any hostile threat or disaster with swiftness and efficiency. Elyran divisions are organised on a planetary basis with many soldiers, professional and conscript alike, serving on their own homeworlds. During times of crisis or war, units may be deployed to wherever the Elyran high command needs them. A notable example of an Elyran Army formation would be the 2nd Bursa Army Corp, also called “the Shield Corp,” in honor of their stand against a vicious assault on Busra during the 2457 Lii’dra incursion. They held back and contained the Lii’dra until the intervention of the Federation Tup Commando, forced the Lii’dra off the planet and into the depths of space. The Army also boasts their own branch of the special forces, the Elyran Special Operations Task Force, alternatively called the ESOTF. The ESOTF conducts special operations both at home and abroad. A notable example of their acts was their reconnaissance work during the Lii’dra incursion, where small formations were deployed to gather intelligence and conduct precision strikes with the aim of halting or at the very least slowing their advance to marginal success. Their motto is “Day or night, we will be there.”

Elyran Navy "Dutifully among the stars, for you."

The first line of defense against all threats, the Elyran Navy is mostly composed of patrol to frigate sized ships tasked with anti-piracy, anti-smuggling, and disaster relief operations across Elyran space. Past skirmishes with the Izweski Hegemony, Empire of Dominia, and the losses suffered during the Lii’dra conflict have led to the Navy calling for modernization, an increase of its capabilities, and raising the tonnage of its ships. This has seen them reach out to not only Elyran corporations, but foreign ones such as Hephaestus Industries and Zavodksoi Interstellar for larger ships and better weapons. As the Empire of Dominia continues to assert itself to Elyra’s interstellar south, the Elyran Navy will only continue to gain importance in Elyran defense policy. Their vessel prefix is SRV, or Serene Republic Vessel. The Navy is also responsible with manning a plethora of outposts throughout Elyran space and has their own form of ground forces, the Elyran Naval Infantry, which are specialised in planetfall operations and usually serve the purpose of establishing landing zones for the army. They also are skilled in boarding and counter-boarding operations and are present on almost every Elyran navy vessel. Their motto is “By our will and resolve.” The Marines also have a special forces branch, called the Elyran Extraterrestrial Brigade, with a focus on special operations in the void of space and covert military operations outside of Elyran logistical networks. The EEB is notable for their joint operation with a Synthetic Liberation Front cell, in which President Dorn was rescued from the Solarian Navy during Admiral Frost’s 2459 invasion of Biesel. Their motto is “With swift and precision, we acquire."

The Elyran military is currently in a period of transition and upgrading. Their pyrrhic victory over the Lii’dra convinced many in the institution that not just the training, but the equipment in service with the EAF itself was obsolete. Their assessments were not entirely incorrect either, as much of what was used to fight the Lii’dra were simply upgraded or modernized versions of equipment that the military had been using for the past twenty or thirty years, rather than genuinely modern designs made with the newest technology that Elyra had to offer. Beginning in the late 2450s, Elyra has modernised its technology, replacing older, outdated systems with cutting edge weaponry and electronic systems made by the best corporations in Elyra. The modernization program was expected to finish by 2470, but the recent phoron shortage has slowed down if not temporarily stopped the various programs in the country’s military as the government’s rationing of phoron has limited the supply of the precious element. Many now estimate that the program could complete by the mid-2470s, though even further estimates are also believable.

An area where Elyra is less dependent on technology for an advantage is in the retraining of its fighting forces. After 2457’s Lii’dra incursion, the military realized that it needed to sufficiently increase not just the number of its combat troops, but the capabilities of those forces as well. Since then, the EAF has raised pay for professional soldier contracts so as to incentivise more Elyran citizens to join the military professionally rather than just as conscripts. There has also been negotiation within the EAF and Ministry of Defense to lower the starting contract to two years rather than three to make the EAF seem like a more flexible option for those that would be uncertain of a three-year-long commitment. This has been marginally successful with the EAF seeing more professional soldiers since its instatement, but numbers of active combat soldiers are still below targets set by the Ministry of Defense. Additionally, the Elyran military has worked hard to develop new and more effective exercises for all of its branches so that it can better train its soldiers to fight in a modern battlefield. These measures have been successful in retraining the troops, though chronically, the EAF still lacks real, modern, combat experience aside from the two-week-long Lii’dra Incursion of 2457 and very limited deployments to Tau Ceti during the Invasion of the Rogue 35th Solarian Fleet in 2462.

At the moment, the Elyran military is an odd sight. Cutting edge plasma weaponry is seen alongside decades old hyper-lasers and cannons. High-tech hardsuits and rigs serve in tandem with old ineffective modular armor systems and bulky shield generators. New, state-of-the-art stealth cruisers travel in the same fleets as ships made only just after the beginning of Elyra’s phoron boom. It is unknown when the Elyran military will ever fully modernize so long as the effects of the spur-wide phoron shortage continues to grip the republic’s economy. Abroad, the reputation of the Elyran military is still in question, with many counting it among the weakest among the human powers in the Orion Spur, an image that the EAF is continually working to change as the country becomes more and more involved with interstellar affairs.