A middle colony with an amazingly hospitable climate across most of the planet, and large oceans, Silversun is well-known as the main tourist destination and retirement point for the wealthy elite of the Sol Alliance. In recent decades, the planet has seen heavy investment by Idris Incorporated. One of the bank's major branches is located here - a gleaming monolith dedicated to corporate wealth located in Silversun's capital city, Silverport Landing - the spot where the first colonists touched down centuries ago.

Human residents of Silversun are divided into two major groups: descendants of the original colonists, and the rich Expatriates. Political tensions are fairly high, although non-violent, and Silversun has historically been a ground for political debate.

Silversun is one of the first Middle Colonies, sometimes even being called a sister colony to New Hai Phong. As colonization had, by this point, become an effort run by the Alliance, the original colonists sent to Silversun were from all around Earth - no real nationality or ethnicity dominated, leading to a diverse set of backgrounds and beliefs being sent to Silversun. While being too distant from the heart of the Alliance to become a jewel world such as Venus, its pleasant climate still made it very appealing to its first settlers. Shortly after landing it was discovered that the planet was incredibly hospitable in almost all of its areas. The planet was quite comfortable in terms of temperature, with it never really becoming too hot or too cold to be comfortable, and lacked major weather phenomena such as typhoons or the intense storms that battered Silversun's sister colony on New Hai Phong. Flora and fauna were abundant, beautiful, and quite docile - some species of avians would nest in the prefab buildings of the first colonists without caring that they were aliens, and aggressive wildlife was notably lacking. Having just come from the still environmentally-devestated Earth, the first colonists of Silversun came to cherish their newfound homes. This viewpoint would, eventually, lead some to come into conflict with the Idris Incorporated investors and staff that arrived on the planet after its initial colonization. 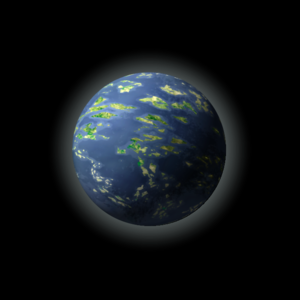 An image of Silversun, displaying its tropical oceanic environment from orbit.

Instead, Idris Incorporated committed to making Silversun a planet-wide resort for the Alliance's wealthy, particularly Cythereans, investing heavily into constructing entire cities from scratch and staffing it with high-quality service staff and primitive, non-intelligent service droids such as automatic bartender and waiter systems to ensure the highest possible quality of service was guaranteed. High apartment prices ensured that only the most powerful and affluent would move into these new Idris-built homes that quickly became symbols of status to own. Occasionally even entire cities were left deserted due to lack of immigrants able to afford housing or willing to settle in the Middle Ring. Large areas of jungle were marked for development by the colonial government, which some of the original colonists suspected of being increasingly in the pocket of Idris Incorporated. The destruction of these large swaths of jungle caused anger amongst some members of the original colonists, and damage to the ecological system of the planet. The planet remained beautiful - as was the intention of Idris' architects while designing these sprawling resort towns - but some of the raw natural beauty of the planet was forever lost in this period.

The settlements of the original colonists, meanwhile, gradually had tourism make up more and more of their economies as Idris Incorporated increased its investments and began hiring heavily from local areas to reduce costs. The previous local industries - primarily agriculture - began to fall to the side as more and more individuals became involved in the service industry, or supporting the service industry, that was developing on Silversun as a result of Idris' heavy investments in the planet. In these first years of Silversun's booming tourist industry the primary visitors were Cythereans from Venus, though wealthy visitors from across the growing Alliance could be found on the planet. Senators from Sol, Hephaestus executives from New Hai Phong, and Eridanian suits amongst others could all be found vacationing or holding business in the beautiful resorts of Silversun. The original colonists were somewhat divided on the matter of Silversun's new primary industry. Some viewed the rapid growth of the tourism industry as a boon to Silversun - and a method to make it more relevant than other planets in the Middle Ring - while others, perhaps the majority, viewed the growth of the tourism industry with varying levels of suspicion. Some felt that the planet's culture would become sanitized in order to achieve the maximum Idris quality appeal to outsiders, while others worried that the large amount of development needed to support the rapidly growing tourism industry would negatively impact the planet's environment. Though the issues at hand have changed, this divide between new and old residents of Silversun remains a major cultural conflict for the planet.

Everything changed with the discovery of Skrell, however. Once the Skrell learned of Silversun, they have expressed high interest in the planet due to the climate, which is especially pleasant for the amphibious species during the rain season. A couple years after the first contact a large wave of Skrell tourists arrived at the planet, which was caused by a Skrell idol advertising the planet on Skrell social media. Afterwards, Silversun ports saw anyone with the money to afford a trip to the planet arriving - flooding the only small spaceport at Silverport Landing - and often staying. The problem only got worse during the rainy seasons, with many Skrell scientists and officials taking vacations here. This exact moment moved the Sol Alliance to introduce their famously strict visa requirements, and only tighten them ever since.

A recent point of conflict between the descendants of the original colonists and Idris has been the presence of IPCs - primarily shells and Bishop frames - on the planet. These Idris shells are a recent arrival, and are of some concern to the native workforce. After all - an IPC can work longer hours at less pay than a human, generally does not complain about working 48 hour shifts, and requires only electricity and a roboticist to function. Many of the more recent high-end resorts have a majority-positronic staff, with the famous Villa del Sol staffing itself entirely using Bishop frames (aside from human handlers) as a measure of their wealth as a resort. 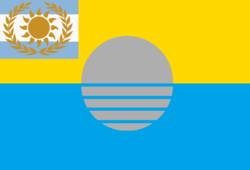 The flag of Silversun.

There are two major cultural groups on Silversun, with a major divide running between them. These groups are the descendants of the orignal colonists called the Originals and the later settlers brought in by Idris called the Expatriates. The Originals tend to be more anti-Idris than the later Expatriates, which tend to be the result of corporated-sponsored settlements by Idris following the discovery of the planet's incredibly hospitable environment. This cultural wedge has been built over the course of decades - perhaps centuries - by Idris' efforts to develop the planet into a gigantic luxury resort and the efforts of many of its original colonists to become something more than a nature reserve for rich Solarians.

The Originals have, since the original colonization of the planet, formed a unique and vibrant culture due to the variety of cultures featured within the original colonists themselves. Overall these Originals tend to hold nature quite highly - often encorporating natural "green space" into the designs of their cities and facilities - due to their origins on an economically devestated Earth. These older colonists have become quite familar with utilizing the planet's natural flora and fauna, and are well-known for their percieved unity with nature throught the Solarian Alliance and Jargon Federation. Many Originals are employed by Idris Incorporated in their various facilities on the planet, while others tend to remain in the planet's traditional industries - primarily agriculture and botanical research. Others have left the planet entirely - often becoming employed in botanical industries across the Alliance.

A common symbol of the Originals is the common Silversun Dawnflower - a flowering plant found across the planet that blooms in the morning and remains active during the early hours of the light, when it utilizes bioluminescent petals to attract insects to spread its pollen. The flower features an odd arrangement of petals in a dual layer - one set of petals is larger to collect light, while another set surrounding the stigma of the flower are smaller to allow it to remain bioluminescent for a longer period at night. The wide and double-layered petals of the dawnflower along with its surprisingly stubby stigma are a common symbol of the Originals that have been coopted by the Expatriates in their marketing for Silversun's resorts. Imitation dawnflower pins can be found throughout human (and even skrellian) space, and both imitations and real dawnflower pins are seen as a very fashionable accessory, demonstrating one's unity with nature (or love of corporate vacation spots).

Reishi is a mushroom that is commonly found on Silversun. In fact, the plant was originally discovered on Silversun by Alliance surveyors. The fungus was mostly ignored by the original colonists of Silversun due to a need to remain pragmatic with their usage of the planet's native flora and fauna due to their sheer distance from the central planets of the Sol Alliance. This changed when Idris Inc.'s R&D department discovered a hallucinogenic compound in the fungus. Attempts to patent the extracting technology were made, but failed due to Alliance's aggressive claims to having the discovered the mushroom first, and Reishi spread throughout known space as a recreational drug after these subsided. Curiously, Silversun is also one of the only places in Sol Alliance where such drugs are legalized.

Silversun is also well known for its large palm-like trees found along its coast and in some coastal forests. The Silversun Soikla, as it is known in Basic, has some external similarities to the common Solarian palm tree. Both are large, tall trees featuring a small amount of large leaves high on its branches. However, the soikla has some differences from the Solarian palm tree. First is its root system - due to the lack of extreme winds on Silversun the root system of the soikla is much smaller than its Solarian counterpart - this proved to be a boon for the original colonists and Idris Incorporated, as the soikla is easy to uproot safely and replant in a different location while ensuring that the tree remains alive and well. A second difference is how the soikla spreads itself. Rather than utilizing fruit such as the coconut, a soikla instead flowers: its trunk is covered in buds that open up into small flowers that open when the wind - which spreads the seeds of the soikla - is high enough, or when there are enough animals near the tree to allow its seeds to be spread.

Most, if not all, of education on Silversun is run by the Sol Alliance. The planet has few centers of higher education due to its widespread tourism industry, with most universities being operated and staffed by descendants of the original colonists and focusing themselves upon the natural sciences due to the planet's bountiful biosphere. The Silversun Landing Institute of Botanical Sciences (often shortened to simply "The Landing") is definitively the most famous institute of its kind in the Middle Ring, and is perhaps the most well-known in the entire Solarian Alliance. Researchers from it have found employment through human and even Skrell space, and the Institute boasts a decent population of non-human students due to Silversun's focus on tourism and the Institute's prestige.

Characters from SIlversun are likely to:

Here is an example character from Silversun:

Here is another example character from Silversun: