Earth is the homeworld of humanity.

Earth (also called Terra, Gaia, or Sol III) is the third planet in orbit around the star Sol, and is the homeworld of humanity. Approximately 74% of its surface is covered in salt water, due to an amplified greenhouse effect melting the planet's polar ice caps several centuries ago and the consequent global shading and cooling projects to reduce sea level. Originally home to millions of distinct species of flora and fauna, it is estimated that 94% of those species have gone extinct, but through the miracle of cloning dozens of new species that were previously extinct are being reintroduced every month.

The biosphere of Earth was severely polluted and ecologically ravaged towards the end of the 23rd century, and a runaway greenhouse effect was nearly achieved by the time all nonrenewable resources had been depleted. However, extensive private, corporate and government investment in reclamation programs, high efficiency renewable energy and sustainable development resulted in a reversing trend of pollution that has greatly improved living conditions on the surface.

Earth is the most densely populated planet in all of explored space, surpassing even the Skrellian homeworld's population by several billion. Earth is also the most developed planet in human space, with sprawling megalopolises, or "megacities." Several of these superdense metropolitan areas are built up in a tiered fashion. There is also a massive population of spacers living in orbit, and several tens of millions living on Luna, the natural satellite of Earth.

A political map showing the old provinces of Earth under the one world government.

The new political map circa 2461 after the ATLAS-dominated SolGov assumed direct control. The official map is viewed as an insult by the people of Earth and is believed to be retaliation of Earth's support of Mars.

The Earth's environment as of modern day is stabilizing at a steady rate. New growth forests that were sown several decades ago are now thriving on the outskirts of major metropolitan areas. The general air quality is now on par with that of the early 21st century, and the oceans have been subjected to extensive reclamation programs that have neutralized large portions of residual pollution. Artificially introduced fish stocks populate the depths, and cloned versions of extinct species have been reintroduced into the wilds.

This was not always the case. From the late 2100s to the late 2200s, Earth was approaching a critical mass in terms of pollution. Global temperatures had risen to the point that the planet was in the early stages of a runaway greenhouse effect, and air pollution blotted out the sun in some areas. Serious health issues due to the environment were especially rampant during this period. The world's rain forests were on the bring of total desertification.

Advances in technology and a massive shift in focus towards restorative and environmentalist policies eventually reversed the negative trend of Earth's environment. Massive terraforming facilities recycled and neutralized pollutants and greenhouse gases in the atmosphere. Most cities are built to be sustainable, and DNA samples from various extinct species were used to reconstruct and clone them with current technology. Within the span of a century, a vast quantity of the effects of ecological and environmental devastation were nullified, reversed in some cases, and severely dampened at the very least.

Earth is the homeworld of humanity. Humans first evolved around 7 million years ago, but it wasn't until only 700 years ago that the human population skyrocketed due to the industrial revolution and the second green revolution. Since then, the population growth trend for humanity has been exponential, plateauing off slightly in the 21st century, but skyrocketing again with the emergence of planetary colonization. Approximately 20% of all humans live on Earth.

There was significant religious and ideological turmoil within humanity throughout its history, which often resulted in warfare and violence. In the 22nd Century the global economy collapsed by more than half, and years of economic turmoil caused the collapse of effective central government in most areas until the United Nations was reformed into a one world government that eventually evolved into the Sol Alliance. However trends of economic or even violent upheaval continued even past the creation of the Sol Alliance, and into the modern day. Terrorist groups still exist and rogue colonial governments will occasionally rebel, with the Sol Alliance stretching itself thin attempting to hold together its hundreds and hundreds of holdings.

Since the creation of the one world government under the United Nations and its later evolution in the Sol Alliance, warfare between the nation-states of Earth has become nonexistent. This is also partially attributed to the creation of supranational organizations to help the various countries manage their respective continents, as well as the Sol Alliance's peacekeeping and mediation duties. Most of the countries that existed around the 21st century ceased to exist and have been replaced by supranational unions that act as provinces for Earth's one world government. 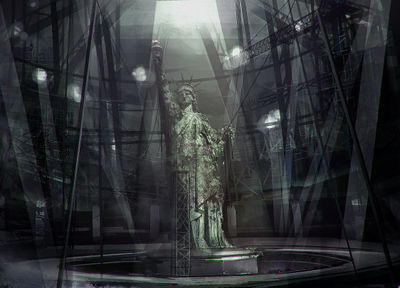 The Statue of Liberty was moved from its original location due to rises in the sea level. It now resides in an enclosed dome, where it is protected from the elements.

In the mid-20th century, an organization called UNESCO designated heritage sites, or areas and locations deemed culturally significant to humanity. Many significant sites were lost as sea levels rose to cover them over time, but significant architectures and monuments ended up being well preserved by their respective nations, and still exist into the modern day. Copies and reproductions of famous monuments exist on other planets, but the originals can still be found on Earth.