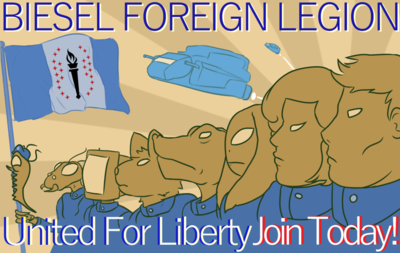 A recruitment poster for the Tau Ceti Foreign Legion.

Founded in 2459, the Tau Ceti Foreign Legion is the primary armed forces of the Republic of Biesel that is primarily comprised of volunteer immigrants and external parties seeking citizenship or stakes in Tau Ceti, which the Republic offers in exchange for enlistment and service. The Legion has been used countless times to ensure the sovereignty of the Republic of Biesel, including the deployment of the forces to combat the Second Solarian Invasion of Biesel in 2462, as well as across the colonies within the Corporate Reconstruction Zone to ensure compliance as well as loyalty.

The Legion has expanded considerably since its inception, and with their promotion to the official armed forces of the Republic of Biesel in 2464 brought with it considerable boons, including a huge increase to their funding, being awarded by the Republican Congress after President Dorn announced the signing of the People’s Protection Act - which included in it provisions in which allows megacorporations to sponsor the Legion. This extra funding has allowed the Legion to significantly upgrade and expand their arsenal, discarding their previous repurposed apparatus in favour of more modern weaponry. Shortly after its promotion, the Legion updated its training tactics to more modern methods and introduced the Tau Ceti Foreign Legion Reserve, allowing for enlisted members of the organization to continue to serve even whilst travelling abroad, however time within the Reserve does not contribute to citizenship requirements.

It has been noted by many within the ranks of the Tau Ceti Foreign Legion that there is bias to non-humans, mostly with non-humans being more likely to be deployed to dangerous regions where injuries are more likely to occur. Several have also come forward regarding their belief that they were denied a promotion within the Legion simply for being non-human, despite them outperforming their human counterparts in various fields.

The Tau Ceti Foreign Legion Corporate Scholarship was unveiled by the Stellar Corporate Conglomerate shortly after its elevation to the official armed forces of the Republic of Biesel. Employees are able to apply and have their tuition paid by their parent megacorporation. However, employees must be enlisted within the organization. Veterans and those not yet enlisted need not apply, as only active Legion members can be granted the scholarship

You are a volunteer or officer of the Tau Ceti Foreign Legion, a sparsely trained government official given the authority to respond to and solve issues in and around Republic space. You are a member of Task Force XIII - Fortune.

Upon spawning upon BLV The Tower, you will be given a number of choices. So let's talk you through them:

The first pop-up you will get is to enter your name, don't forget your rank though! For your first time it is advised you label yourself as a Volunteer Officer (Vol. [name]). As you become more experienced you may well get a chance to be a squad leader, known as a Prefect (Pfct. [name]). 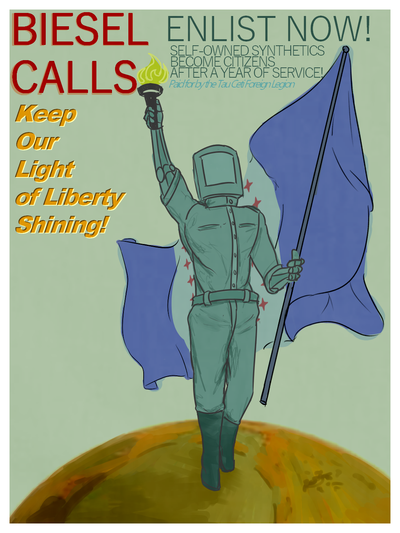 Another recruitment poster for the Tau Ceti Foreign Legion, showcasing the benefits Synthetics gain when enlisting.

All species found on the Horizon can be a member of the Foreign Legion emergency response team. There is no species restriction on TCFL lead officers.

Alongside you will be other officers, generally 2 or 3, but depending on the situation we can have multiple teams working together. In addition to volunteers, there will be the senior officers responsible for leading the team.

You can identify who is who by three separate visual representations. These are distinguished by accessories provided to the specific members of the team that can be pinned to your armor's chestpiece by holding the accessories in your hand and clicking on the chestpiece. This works for the normal vest armor as well.

Volunteer (Vol.) - Your armor has no ribbons or specialist pins and is a bright blue across its entirety.

Legionnaire (Lgn.) - Your armor has two bright yellow markers, an accessory able to be placed on the chestpiece of your hardsuit/vest.

Prefect (Pfct.) - Your armor has a long ribbon across your right shoulder wrapped around your arm and a solemn pin across your left breast. It is an accessory placed on the chestpiece of your hardsuit/vest.

As a member of the Tau Ceti Foreign Legion, your objective is to handle the emergency situation that the station has reported by any means necessary, and return the station to normal operations.

You have a selection of moderately powerful equipment and a set of ID cards with basic access to most departments and maintenance across the station. You carry the authority of the Republic government, however, note that this may very well be deemed irrelevant in the face of NanoTrasen or the crew given circumstance. One should use this authority to assist in remedying the situation on board and to further any set objectives in place by the team lead. You can get to the station via either the Dropship (BLV Chariot), or the individual drop pods.

Once the emergency is contained, your team is expected to depart, or at worst, facilitate an evacuation or emergency crew transfer.

As a member of the team you have a choice of three specializations and one possible ghost role:

Volunteers - Drawn from on-call volunteers, these are moderately versed in weapon handling drills, hand to hand combat, arresting procedures as well as other skills such as basic first aid. Unmarked hardsuits.

Engineering Legionnaires - More specialized team members who are more often than not paid, these are well versed in most engineering procedures and can get the team wherever they need to go. Marked by specialist medallions.

Pilot Legionnaires - While only available as a ghost role, the pilot is also a specialized team member. They are well versed in piloting anything they can get their hands on.

The specific tools you will need will vary by situation, but can be split into 2 categories, your essential tools and your task specific tools.

Every Tau Ceti Foreign Legion volunteer dons the same uniform and sets of armor with ranks distinguished by accessories mentioned previously. These are as follows -

You will have access to a vendor - the SecTech which sells the standard things such as flashes, pepperspray and handcuffs.

The Prefect's room contains a lot of useful things. Let's look at everything.

Beyond the standard Armory, there are three vehicles that can be chosen should the situation warrant it, defer to your Prefect for permission should you desire to take one. They are located in south eastern portion of the base. They are:

On top of the normal armament available to the TCFL, there is a special equipment storage reserved for Admin and Event use, locked behind unlabelled blast doors. Inside is:

Working On The Horizon: The Reserves

It is possible to be in the Tau Ceti Foreign Legion's reserves and also work on the Horizon. Your enlistment will only became relevant should you be activated by the Legion if Tau Ceti needs more personnel.

1) Working for the Legion is like taking a 2nd job. The split in responsibilities, and the split in loyalties to a government agency and the private conglomerate that is the SCC, means you cannot be both part of the legion and in Security or Command.

2) All rules on escalation and emergencies still apply. You should not use your status as a legionnaire to self-antag, hunt down antagonists, or otherwise throw yourself into station emergencies.

3) Don't cryo or ghost as your character then spawn in as that character in an incoming Legion squad. It's embarrassing and would make you look desperate.

4) Don't ask incoming Legionnaires to give you weapons or gear when they're coming in. You can help in your current job by doing that job - or staying out of the way unless asked.

The Legion is styled as a militia rather than a professional military force. You could expect people like your neighbors, local members of the community, immigrants looking for a new life and the average joe to join up rather than a career soldier.

The highest rank you can be as an on-ship reserve Legionnaire is a Volunteer or Legionnaire. If you are a Legionnaire, try picking a job that compliments your specialty, like engineering or medical doctor.

In terms of special skills, a member of the TCFL has a reason to have the knowledge to use voidsuits or hardsuits, and anything in the basic first aid kits.

Reserves abroad are trusted to keep fit enough that they can continue their duties again if called up and can expect a short refresher course upon returning to Tau Ceti should the Republic have need of them.

Active duty Volunteers train 1 - 3 days a week on a flexible schedule and get access to scholarships and specialized in-house training that can let them advance to become Legionnaires.

Active duty Legionnaires train 3 - 4 days a week, giving a higher time investment, and are either coming from a specialized profession or plan to get into one when they're out.