Hro'zamal is the second planet in the Nrrahrahul system. Formerly named Nrrahrahul Two, it was given the name Hro'zamal following the establishment of a permanent civilian colony on the planet's surface in 2459. The planet is roughly the size of Earth. About 77% of the planet is covered in oceans. The remaining landmass is dominated by lush jungles except for the poles that possess a subtropical climate.

Hro’zamal possesses few mineral richness, but it has a diverse ecosystem and fertile soils. Agriculture has become one of the main activities of the colony, that is slowly learning how to use the native plants, as Adhomian ones are unable to survive in a different climate. Xenobiologists also have expressed interest in the planet, seeking to organize expeditions in hope of finding useful flora and fauna.

The system of Nrrahrahul is home to the first advanced outpost established by the Orbital Fleet, this base was used to combat piracy and smuggling. The second planet of the system is deemed as the only one able to sustain life, and due to such it was designated to be the site for the first Republican attempt at colonization. Nrrahrahul Two was granted the official status of colony in 2459, following the application of 15,000 civilian inhabitants. Under the new colony status, it has been renamed as Hro'zamal by the Ministry of Internal Affairs. Arrleef Pondiskarr was appointed as the colonial governor.

The planet's capital and first settlement, Muldhir, was founded in 2460 at the less harsh region of the poles. The town is home to the majority of the system population, that were transferred from the naval station on orbit as the construction effort advanced. Buildings are equipped with an outdated HVAC system that is prone to failures and other complications. Most of Hro’zamal remains unexplored, with few outposts and settlements scattered across the jungle. Scientists, usually funded by the People's Republic, have taken a special interest in the planet due to its rich fauna and flora. It is not an uncommon sight to see expeditions leaving the capital, with some of them never returning.

The civil war has forced the People's Republic of Adhomai to recall their ships and soldiers from Hro’zamal. As the republican control over the planet weakens, dissent spreads among the population. The solarian embargo also caused the degradation of the living conditions on the colony, as parts required to repair the precarious HVAC systems are becoming rare. Many believe that the republic has abandoned them, and the time to claim their own destiny may have come. Growing opposition, reports of guerrillas in the jungles and the supposed presence of ALA agents have led the governor to enact a state of emergency. The remaining colonial guard has been granted permission to do anything necessary to maintain the order, while the civilian population becomes more and more disgruntled with this situation.

An uprising against the People's Republic happened during the final stages of the war, in an attempt of claiming independence for the planet. Led by the captain of the Colonial Guard, Fakhri Oan, the rebels conducted guerilla warfare against the loyalists, besieging the colonial capital. The siege of Muldhir was lifted when the Orbital Fleet returned to the planet, forcing the rebels to retreat into the jungle. Rebellious forces are now involved in a conflict with the Grand People's Army, relying on smugglers for supply.

The majority of Hro’zamal’s lands are covered by dense jungle, a near-impenetrable wall of alien plants that are home to unknown creatures. Humidity and temperature are the biggest challenges for Tajaran settlers. Modified voidsuits, equipped with cooling systems, are usually worn by pathfinders seeking to explore the dense forest. The poles of the colony have a subtropical climate, being home to the only city of the planet. Tajara manage to survive in these regions without the use of suits, but the use of acclimatization systems is necessary during the warmer seasons. Hro’zamal has few mineral richness, but it has a diverse ecosystem and fertile soils. Agriculture has become one of the main activities of the colony. Xenobiologists also have expressed interest in the planet, seeking to organize expeditions in hope of finding useful flora and fauna.

The culture of Hro’zamal is not so different from the People's Republic of Adhomai, collectivism and Hadiism are considered important parts of society. However, the reality of this harsh world had its own effects on the settlers. The inhabitants are seen as rugged pioneers, self-reliant individuals that are ready to face the wilderness and risks of expanding the Tajaran presence into the galaxy.

Clothing and cuisine are different from Adhomai due to the climate. Colonists wear simple cotton overalls, with no pelts or coats. Army field rations are a rare and sought after commodity, with the population having to rely on the native plants and animals for subsistence.

The neglect of the planet by republican authorities gave birth to a growing group of Tajara that believe that their destiny is not bound to the Republic. They have a more skeptical view of life in this new world, unsure if Adhomai will ever care about them again. These opinions are whispered in private, with many still being afraid of the pioneer guard. But the rumours of the Adhomai Liberation Army infiltrating Hro’zamal is feeding the hope in the heart of dissidents.

The defense of Hro’zamal was in the hands of the Orbital Fleet until the majority of the military was recalled back to Adhomai. Governor Arrleef Pondiskarr decided to establish a militia force to replace the Republican soldiers, the Hro’zamal Pioneer Guard. Pathfinders, farmers, and hunters were drafted into this new organization, with the objective of keeping order and protecting the colony. While not particularly well trained or disciplined, they are eager to defend the land they call home.

These soldiers are armed with traditional Tajaran weapons; bolt action rifles, bayonets, and pistols. When deploying in the jungle, they wear armored voidsuits outfitted with mounted cooling systems to combat the heat. Machetes and axes are also used to make paths into the wilderness.

The Rrak’marr is one of the predators that dwells in the forests of Hro’zamal. They are a large snakelike creature, with their limbless body covered by hard scales and quills. This animal hunts at night, making use of their large and well adapted eyes to snatch prey with their gargantuan jaws. They were given the name of Ghost Light by the colonists due to their capacity of emitting lights through their eyes and quills. Pathfinders have confused their lights with lanterns or outposts, foolish wandering into these monsters. Xenobiologists suggest that the bioluminescence is used to attract mating partners.

This creature has a mythical status among the colonists. Many claim to have spotted them before, while xenobiologists have denied any evidence of their existence. The Ishnarak is described as a tall humanoid with a strong body covered in red fur, their small head possesses only one eye and a single large mouth located on their stomach. It is not unusual for pathfinders to have their own stories about meeting the jungle dwellers during their explorations. Tales describe them as wary beings, avoiding any contact with the Tajara. Scientists have attempted to find and record the Ishnarak, but no expedition had success so far.

The Hro’zamal Fatshouters, despite its name, bears little resemblance to the Adhomian animal. This small fat herbivore is covered by brown leathery skin, its head has tiny eyes and a long trunk used for feeding. They are a pacific creature with a herd mentality, traveling in large groups across the planet. They are hunted by colonists and native predators for their fat meat.

Schlorgos are native inhabitants of Hro'zamal, they live in the jungle mountains, from where they jump down large cliffs, to move to greener pastures in the summer, protected from the impact by their fat blubber. They come in a variety of colors, are described as perfectly smooth except their beaks and move by pushing their bodies and rolling in the desired direction. 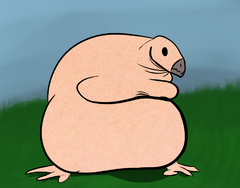 Schlorrgos are now domesticated, serving as either pets or livestock to the Tajara. Schlorgos are particularly popular for their blubber, used as an insulator, industrial lube, and glue. They can also be harvested for their meat or even milk, however, both are described as low quality and bitter. Schlorrgo milk, in particular, is known to cause violent stomach cramps to Tajara, but has seemingly no effect on other species. Due to their resistance to impacts and brute force, children will often throw or kick around Schlorrgos for fun.

A climbing plant found on the trees and bushes of the jungle. The Heart-Berries have large leaves, colorful flowers, and red fruits that are known for their seeds. The fruit and seeds of the Hro’zamal Ras’Nifs are grinded into a powder that is prepared as an herbal tea. The drink is bitter and usually consumed cold, but it has become rather popular among the colonists due to having a stimulant effect similar to caffeine.

Invaluable for their quality wood, the Cinder Trees make up a large part of the jungle in Hro’zamal. The plant has a dense, orange-red heartwood that takes a high shine, and is used in construction and in the fabrication of gun’s stocks. Red dye can also be extracted from this tree.