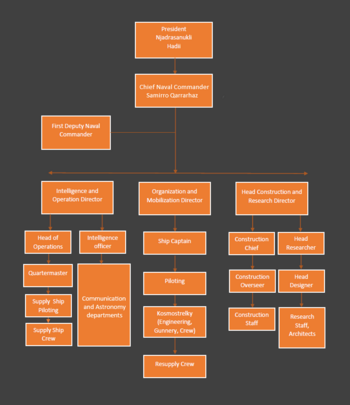 Organization of the PRA space forces.

In the early stages PRA had simply used old designs purchased from Nanotrasen, Sol Alliance, Elyria or the Frontier Alliances but very soon the PRA discovered these outdated and overpriced designs were near useless when dealing with anything bigger than a single pirate vessel as their guns could barely penetrate the armoring and shielding, having bled enough money through destroyed vessels a radical change came after a capture of 3 Civilian Transport ships by pirates, The Blizzard Doctrine was established. The Blizzard Doctrine combines the best of PRA combined arms actions and DPRA guerilla warfare, the fast, small and aggressive craft is perfect for patrolling borders and interviewing while the Sentinel carriers provide them with much-needed support. Icelances and Headmasters are much less utilized, usually being kept in reserve unless a larger threat appears.

The PRA has always been known with substituting quality with quantity, however, their doctrine had to be tweaked for space combat as their ships, cheap as they are, are still hard and expensive to replace for the government, this makes the Kosmostrelki one of the most trained troops in the PRA roster. The Kosmostrelki are usually trained in Baghrar simply to instill a sense of discipline and because it’s an excellent way to learn balance in space. However their training shines in their ability to improvise on the fly, many anti-pirate actions have been saved with the creative use of duct tape, chewing gum and a pencil. The talk among other troops is that the Kosmostrelki units have a high amount of deserters due to the nature of their job and how easy it is to run away into space, however, these statistics are unsupported.

Most heavy Republican ships carry a detachment of very outdated combat robots brought from Solarian military surplus, they are usually armed with blades, ballistic rifles or rockets. Those machines are usually deployed in rare cases of boarding operations. They possess a rudimentary artificial intelligence and targeting system, being only capable of perfoming simple tasks outside of attacking. The People's Republic is unable to manufacture this kind of synthetics, but their fleet technicians can easily repair and reprogram them.

Non-combat ships are a common sight on the resource-rich Adhomai. However, no single Tajara whose citizenship is within PRA is allowed to privately own such a ship and instead, all ships are owned and the property of the PRA government. This demand does not apply to anyone outside of PRA zones of power. However, due to the fact that the PRA owns the biggest military fleet, Tajara would be hard pressed to admit they're part of the NKA or DPRA, making the life of those two factions that much harder. Foreign vessels face no such obligations and Nanotrasen mining vessels do not need to answer hailing at all.

Tajara freighters are just like any other, big, square and with a powerful engine. However, they do stand out with one interesting feature, a powered emergency jettison. This prevents anyone from obtaining said cargo as it speeds off at incredible speeds into space. Denying the enemy valuable resources and booty. Skilled enough pilots are capable of launching said crates directly at their pursuers. (Pirates have to risk following cargo flying off at incredible speed and possibly spinning through space or following the ship.)

Civilian Transports are a rare sight in the star system, but they do exist. Combining powerful engines for a quick getaway with thick armoring, they easily outrun and outlast any raider in deep space. This has come at the cost of navigation and comfort as ventilations would provide unnecessary weak spots, this has led to numerous cases of heatstroke in these cramped ships.

A skipjack would usually be seen in the hands of smugglers but Tajara has developed an ingenious way of mining. Instead of using a large ship to destroy or land on an asteroid this small, one-pilot and pointed Jacks simply strip away a part of said asteroid and take it back to a mining station or a larger mother-vessel where is it processed. This enables them to mine even in very dangerous areas as they can quickly flee to a base.

The most common sight in Tajara space are scrappers, two or three crew ships which serve to magnetically grip any debris or damaged ships and tow them to a spaceyard, where they’re either scrapped or repaired. There is a rumor floating around about these horseshoe-shaped ships, that the crews steal orbiting craft with the crew still inside.

Realizing that ship-combat is completely different from for example naval or ground combat, the PRA developed a unique doctrine titled “The Blizzard”, it is defined by quick hit and run attacks of smaller interceptors while larger ships stand back as fire support, softening the targets. This has led to Tajara having probably the fastest but least durable fleet in the known space, perfect against pirates, mercenaries and other wild groups of space.

Fangs are one-pilot interceptor with practically zero shielding, armor and wielding ineffective weapons. Their design copied from Alliance corvettes saw frequent refits, most recently to fit the Blizzard doctrine these ships have been fitted with a number of cannons and small un-guided rockets for quick, brief and destructive hit and run attacks. Fang pilots range from fresh-faced recruits to grizzled veterans, however it is rare for a pilot of a Fang to reach his middle-age crisis.

The newest addition to the Tajaran roster, the Snowstorm is a two-crew, pilot and an operator, ship with curiously delicate and expensive technology. Employing a wide range of signal disrupting devices purchased from the Eridanian security companies, these ships are, at full power, capable of knocking out larger ships with their hacking capabilities. The crews of Snowstorms often shave the fur on their arms and head, as any exposed fur could damage the delicate electronics.

A perfect reflection of Tajara doctrine, these ships are akin to artillery. Shaped like a rifle barrel this long tube of a ship actually packs quite a surprising punch. Packing magnetic accelerators along the whole length of the ship and equipped with titanium rods, it fires said rods at supersonic speeds. Impossible to shoot down by gunners due to their thin profile, undetectable by conventional point-defense and maximum impact force on a minimum area make this into an extremely deadly weapon. However, with near zero armor, limited battery allowing about one shot per three minutes and limited speed this “space artillery” carries over it’s ground vulnerabilities.

Of a similar design, yet completely different purpose, the Icelance GC-2 differs in one thing, main weapon. With advancements in technology PRA scientists have perfected the art of frost, thus the GC-2 variant comes equipped with a molecule retarder commonly known as a “Freeze Ray”, the cannon works with temperatures the cold void of space could only hope to achieve, weakening the structure of outer armor and creating a layer of permafrost on shields, impeding the pilots visual access and forcing the shield to eventually crumble under the weight of the ice. This design comes with the added benefit of straining the battery much less, making this design capable of firing multiple times rather than only once before it has to enter its downtime period. This means that the GC-2 is usually employed in tandem with multiples of the original design.

The heaviest of the Tajara ships follow the Blizzard doctrine designed by PRA military and keeps its status as the lightest heavy ship ever designed, almost putting it among medium ships. This combination makes the cruiser immune to anything most pirates can field while being fast enough to catch up and begin firing. However, in a serious fight with a heavier ship, it would easily fold. The PRA government has already started working on possibly bigger designs, intended for possible future bigger fights as relations with humanity and Sol slowly degrade.

The Blizzard doctrine required a ship which could resupply the numerous Fangs and energy consuming Snowstorms and thus the Sentinel was designed. Sentinel is a carrier ship used to refuel, rearm and repair smaller ships during a battle. It is the largest and bulkiest ships in the Tajara roster, it was assumed that the Sentinel would be the primary target of enemy fire, in response the government spared no expense on this design. Boasting high armor, impressive shielding, point-defenses, and even Bluespace Disruptors purchased from Epsilon Eridani, piloting this kind of ship is an honor of the highest degree and often left only to the most skilled of captains and pilots. Of course, the ships are also slow and expensive to upkeep and so many crewmembers jokingly call them “moving space stations”.