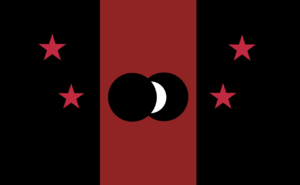 Flag of the Free Tajaran Council.

The Free Tajaran Council began as a rebel faction in the Duchy of Shungsta during the First Revolution. Born among the oppressed peasants and factory workers, the movement advocated for the total abolishment of the existing governments in favor of local democratic councils. The Free Council became a serious contender for power in Northern Ras'nrr after Volin Kar'etrink - a young Hharar worker known to be a firebrand - was elected its leader. Drawing inspiration from the rebels of Zatushka and S'rendul, Volin organized the Council into a mobile force of guerillas fighters; cars and carriages were used to move infantry and artillery in and out of battle. The Free Council clashed with both rebel and loyalist groups during the revolution.

Due to its innate hostility to all other Adhomian Civil War factions, the Free Tajaran Council was unable to secure any significant territory outside of Northern Ras'nrr. The Council's forces were quickly defeated by the Hadiist forces when they invaded the region in 2427. Volin then gathered the survivors and fled to Crevus. Due to the Council's inexperience with galactic affairs, the Tajara were unable to figure a way off of the planet by themselves. This impasse was solved by the intervention of Nanotrasen, who helped them hire ships to leave Adhomai. Regardless of their political beliefs, this interaction left a positive impression of the megacorporation on the Council. The Tajara traveled through the Coalition of Colonies territory until they reached the System XZP-098 in 2430.

The Free Council decided to settle on Himeo because of its government and weather. Posing as refugees from the ongoing Civil War, they were given asylum and a degree of autonomy to govern themselves. Staying loyal to its ideals, the Council organized itself into a democratic commune built around the direct participation of its members in all public matters. Through the cooperation with Himeo, the Free Council prospered and grew in numbers.

Despite all the prosperity, the Free Tajara Council does not consider Himeo its home. The dream of creating a free Adhomai was never abandoned. When the time arises, Volin and his followers secretly plan to return to their homeworld and topple down the Adhomian regimes. They prepare their plot deep in the tunnels: weapons are brought and secretly stored; militias train daily for the inevitable conflict; plans to assassinate leaders, sabotage factories, and sow discord are voted on. Thanks to a deep paranoia and isolation from the wide Tajaran community, the Council's plans are still unknown to the public. Officially, the Council renounces the original intentions of their revolutionary past.

The Free Tajara Council now faces an existential crisis. Unable to truly compete with the Tajaran nations, many of its members doubt Volin's plans. The younger generations - most of which were born outside of Adhomai - have conflicted views towards the prospect of returning to a place they have never been to. The Old Guard stubbornly clings to its revolutionary dream. Some believe that their limited operations in Himeo are enough, while others agree that they should seek allies in other places. Whispers about abandoning the plan and settling definitively in Himeo are also becoming increasingly common.

Volin Kar'etrink is very old; little time is left for him in this world. The Free Tajaran Council now stands at the crossroads: a choice must be made concerning the future. In their struggle to influence the Tajara, the Tajaran nations have taken notice of the sizable community in Himeo. The Council is now a battleground for another proxy war between the Adhomian nations. Almost all factions within the community are currently backed up by one of the Tajaran countries in an attempt to secure their support.

The Free Council culture is the traditional Northern Ras'nrr way of life heavily influenced by the Council's ideology, the situation in Himeo, and the past isolation from the wide Tajaran community. A great emphasis is put on the collective and the survival of the society above the individual. Himean Tajara will usually have an aversion to strict chains of command, preferring to make decisions based on common consensus instead of relying on a leader. Diligence and modesty are considered virtues that every Tajara should strive for. While not necessarily xenophobic, the Free Council Tajara are highly suspicious of outsiders and will take more time to establish bonds with people from outside of their communities.

With the help of Himeo, the Free Council was able to establish schools and freely educate its population, creating a steady supply of well-trained technicians, miners, and engineers. Without the trappings of Adhomian prejudice, the Zhan-Khazan were able to receive the same education as any other ethnicity. Some of its members are now starting to leave the planet to acquire experience elsewhere.

Speaking about the Free Council's plan of returning to Adhomai to outsiders is taboo. Anyone found breaking this prohibition will usually be dealt with violently.

Because of the Council's rushed exodus and distance from Adhomai, most of the native Tajaran diet was replaced by alternatives found in Himeo. Only Blizzard Ears crops managed to thrive in the underground environment. The ongoing Cold War has opened the way for imported Adhomian goods as the Tajaran nations try to approach the Free Council.

Tajaran music in Himeo is commonly performed with folk Adhomian instruments. Songs are used to transmit the Council's history, their ideals, and to remember the community of their homeworld. In true Tajaran fashion, the oral tradition remains strong within the Free Council.

Despite high literacy rates, books are still seen with suspicion due to their relationship with the pre-revolution nobility in Adhomai. However, technical manuals are prized because of their practical use. Himean reference texts are frequently translated to Siik'maas by the Council's teachers.

Most of the Free Council's population lives in a neighborhood of Dorshafen known as the Foundling District. Once part of an abandoned Hephaestus Industries quarry, the District was transformed into a sprawling system of tunnels and living chambers by the Tajara. While the architecture follows the Himean style, internal decoration and furniture are distinct Tajaran. The Foundling District is home to the Council Committee Hall, a spacious chamber where important decisions are discussed and voted by the population.

Because of space constraints, most houses in the Foundling Districts are shared between two or more families. Residents share the same hallways, kitchen, and living room. Each family has access to their personal bedrooms and bathrooms.

The Free Tajaran Council is a commune ruled by a direct democracy without any kind of apparent hierarchy. Political decisions, distribution of resources, assignment of tasks, and punishments are decided in councils where the entire population is invited to take part. Since involving everyone in a discussion is impossible, groups will elect a speaker among themselves to attempt to convince the Council to vote in their favor.

The Free Council elects a representative quinquennial to represent its interests before the Himean Government. Since they arrived in Himeo, Volin Kar'etrink has always been chosen. While it does not grant any special powers, the Representative position holds plenty of influence and can easily sway debates to their side.

All of the Free Council's industry and agriculture are collectively owned. The workers themselves decided the direction of the business alongside the directives voted by the Council. Himean Tajara will also commonly work in the rest of the planet's ventures as employees.

Law enforcement and defense are handled by the local militia, known as the Adhomian Free Guard. The members of the Guard are elected by the population and may be dismissed from their post through a vote as well. The militias are allowed to arrest any Tajara suspect of committing an infraction; prisoners must be immediately brought to a Free Guard meeting to decide if they will remain imprisoned. Instead of holding courts, the fate of a criminal is collectively decided by the entire commune. The Free Guard and the courts are also used to enforce traditional Tajaran values on the population.

The ideology of the Free Council is known as Kar'etrinkism. Its opponents first coined the term; its adherents later adopted it to honor the old revolutionary. Kar'etrinkism advocates for the violent overthrow of the Adhomian governments in favor of the establishment of local communes ruled through direct democracy. The ideology claims that all of Tajara's woes are caused by the authoritarian states that have always existed in history. While unable to gain any foothold in Adhomai, Kar'etrinkism has been implemented with moderate success in the Free Council's areas. However, the ideology is undergoing a crisis as it has been unable to make any real progress towards liberating Adhomai.

The crisis of faith brought by failures of the Free Council in enacting their plan of returning to Adhomai has created political divisions within the commune. These factions are currently engaged in a power struggle to decide the community's future. In their search for allies, these coalitions have aligned themselves with the Adhomian powers.

Composed of veterans from the First Revolution and Volin's loyalists, the Revolutionary Old Guard believes that the current status quo should be maintained. The Free Council must stick to its allies in Himeo and stay clear from outside influence. The time to reconquer Adhomai will eventually come. The Revolutionary Old Guard was once the majority; since the start of the cold war, they quickly lost ground to the other factions.

A gathering of Volin's opposers and younger Tajara that wish to end the Council's isolation in pursuit of new allies. The New Tajaran Assembly still wishes to continue with the plan of eventually returning to Adhomai, but believes that the isolation has only hindered their efforts. Recruiting new members and gathering external support is the only way to become stronger than the governments that control the homeworld. Members of the factions are usually the ones leaving Himeo to explore the rest of the Spur. This faction is backed up by the Liberation Army.

Made up of disillusioned Tajara, the Himean Front wants to abandon the plan of returning to wage war on Adhomai. For them, staying in Himeo is the best course of action; the Free Council will never be able to match the Adhomian powers. They are also opposed to any kind of isolation and seek to further the Council's relationship with the Tajaran nations. This faction is currently supported by the Democratic People's Republic of Adhomai's civilian government.

Composed of extremist elements, the Adhomian Bloc is the smallest but most radical faction. It considers the plan of returning to Adhomai and the Kar'etrinkism as total failures. Inspired by Himeo and the Tajaran nations, the bloc seeks to reform the direct democracy into a representative democracy guided by an elected council. This clique is in favor of further integration with the Adhomian powers. They are currently sponsored by the People's Republic of Adhomai.