Located at the northernmost point of Adhomai, the North Pole is a barely explored landmass that has recently attracted the attention of the Tajaran nations. Protected by its extreme climate and legends, the pole was left virtually untouched until the Cold War. Researchers, explorers, and soldiers now flock to the continent to unveil its secrets. Each side has already begun to carve their territory using their expeditions.

The Adhomian factions are now engaged in a race to conquer the North Pole. Each faction has begun to deploy their Tajara on the polar shores to explore and seize as much land as possible.

The Adhomian North Pole is a mixture of rock and ice sheets. Like most of the planet, the geography is marked by tall mountain ridges and peaks. The poles are also home to the only active volcanos in Adhomai. The climate is extremely severe and the temperature never goes above the freezing point. Snowstorms are frequent. Because of its position on the globe, the Pole experiences the winter for most of the year; during this season, the days are usually locked in a perpetual night or twilight.

The sea around the North Pole is littered with icebergs and shipwrecks. Navigating around these waters is dangerous and only reserved for the most experienced sailors. Countless ships have been lost while trying to navigate around the treacherous polar waters.

While the North Pole may appear to be devoid of life at first, it is home to several creatures. Besides the aquatic animals that dwell under the ice, there are a few creatures adapted to the harsh environment. However, most of the surface fauna is composed of microscopic organisms that feed on detritus or thrive in acid volcanic soil. Finding new species is one of the objectives of the expeditions.

The native flora is restricted to small lichen-like turfs that sometimes emerge from the ice during warmer days.

Surrounded by legends and rumors, the Adhomian North Pole is home to many curious anomalies that remain unexplained. Pre-Contact Tajara usually attributed fantastic explanations to these events, either seeing them as a curse or act of the gods. The expeditions are currently attempting to understand and likely weaponize these phenomena.

Conquest of the North Pole

In their struggle for supremacy during the ongoing Cold War, the Tajaran nations have launched missions to the North Pole. These expeditions seek scientific data, prestige, and anything that could give their factions an edge in a future conflict. While the missions are mainly focused on exploration and research, sabotage and violent skirmishes are still a possibility. 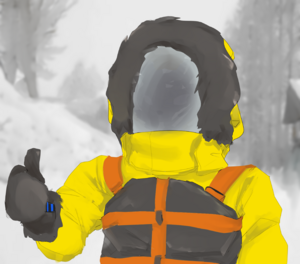 The People's Republic was the first faction to gain a foothold on the North Pole. In a joint effort between the navy and the Ministry of Research, a research station was established in 2464. Submarines and airlifts are used to supply the Hadiist expedition.

Out of all expeditions, the Hadiist one is the best equipped. Besides the typical cold-weather gear, they have access to HES-02 suits: a top-of-line environmental bodysuit designed by the Hadii Institute of Orbital Research. The suit contains its own life support system and offers protection from several types of hazards. However, the suit's back air tank is easily damaged and current models restrict movement.

Created to solve the problems of transportation at the North Pole, Kharmachov Exploration Vehicle is a large, tracked vehicle designed by the Hadii Institute of Orbital Research. Besides all kinds of adaptation to the extreme cold, the car has heated living quarters for its crew and a small laboratory. The prototypes have a landing pad on the top, from where an autogyro can be sent for aerial reconnaissance. Another notable feature is the fact that the Kharmachov is powered by a nuclear engine; the reliability of this innovation is untested so far.

The New Kingdom landed on the North Pole in search of a lost archeological expedition who set sail in search of a Gunpowder Age ship, Minharrzka’s Chosen, in 2463. While the main objective of the Royalist mission is to locate the missing team, their presence has been used by the NKA in the ongoing conquest of the North Pole.

The Rescue Mission is equipped with basic polar gear and internals. Despite having simpler equipment, they have access to a more stable supply line and experienced sailors and explorers.One of their primary focuses is figuring out reliable means of harvesting food in the North Pole. Royal Navy icebreakers have proved to be extremely useful in the frequently frozen polar oceans. Armored aerosleds also have been used for short-range missions. Ha’rron are brought along as well thanks to an innate ability for them to detect and avoid unstable ice.

Officially, the Liberation Army Navy was dispatched to the North Pole for two reasons: training and recovering lost ships. However, like the other Tajaran nations, their incursion is truly there to take part in the ongoing competition. Without much of the scientific drive that exists in the other missions, their presence resembles more of a group of scavengers and pirates.

Despite the recent rebirth of the ALA navy, the expedition is decently equipped. The support of the Shastar Technical University has supplied them with reliable winter gear and internals. Besides the few military ships, a Crevan presence has followed the mission to supplement their fleet. The civilians play an important role in maintaining the incursion, usually by proving resources and technical expertise.