Little Adhomai, also known as the Imperial Plaza or District 6, is the home to most of Mendell City’s Tajaran population. A shady district with various dives, bars, and restaurants, as well as a high rate of crime. Domestic disturbances and break-ins are frequent, as are scrumptious burgers. Although not an outright slum, it is not widely trafficked by those who reside outside of the district.

District 6 is usually divided into several sections by its inhabitants, each of them being related to their place of origin and alignments; it is not uncommon for clashes to happen between supporters of the different Adhomian factions, and such conflicts might escalate into riots or further violence. This situation has deteriorated greatly since the Armistice due to the growing presence of governmental elements in the area. Tajaran intelligence agencies have begun clandestine operations in the area, supplying weapons and training to armed groups. Tensions are rising, Little Adhomai is now another theater for the Adhomian cold war.

Before the migration of Tajara to Tau Ceti, the Imperial Plaza was a sparsely populated residential district. Biesellite administration and investors paid little attention to the location. With the end of the First Tajaran Civil war and the opening of the Adhomai, the first wave of Adhomian migrants reached Mendell City. The low prices of District Six were attractive to Tajaran migrants, and as such the first communities of immigrants were created in that area of the city. Despite its growing population, the government neglected much of the district’s urban development. Crime and gang activity soon became serious problems in Little Adhomai.

The lack of urban planning has transformed the Imperial Plaza into a maze. Apartments, shops, restaurants, and clubs pile upon each other. Many housing units are constructed in traditional PRA fashion: large square buildings hosting several families and built using cheap construction materials. Tunnels, hiding places, and bunkers can also be found in the underground of LIttle Adhomai.

The Second Tajaran Civil War caused a wave of factionalism between the inhabitants of the Imperial Plaza. Little Adhomai was divided into sectors supporting the different warring Adhomian nations. Gangs were recruited and supplied by the People’s Republic and the Liberation Army; these groups were used to further expand their influence in Mendell City. Riots became more common, with violence spilling into other districts. Biesellite police had little success in solving the delinquency problem in District Six, forcing the locals to create their own neighborhood watch squads. In recent events, District Six was the stage of heavy fighting between its warring factions in 2462.

The art of Little Adhomai revolves around the Tajaran condition and culture in Tau Ceti. The challenges of living in an alien world, the Tajaran civil war, discrimination; and employment under megacorporations are common themes in District Six’s music, literature, and cinema. Local artists are commonly sponsored by the Tajaran governments.

The District is the birthplace of "Little Tajaran Electro swing", a Biesel based variant of the classic Tajaran Electro swing known for its stronger focus on electronic dance music and Tau Ceti Basic lyrics. Traditional Tajaran music is still popular among the older Tajara and newcomers migrants to Biesel. Radio stations, many of them working under the behest of whatever government they pledge allegiance to, operate in Imperial Plaza, bringing propaganda, music, and news to the population.

Cinema and holovideos are a thriving industry in Little Adhomai. Both professional and amateur studios are involved in the production of films. Popular genres include military dramas, period pieces, and crime thrillers. Arzjun Haurjuhrl is one of the most famous film-makers of District Six; he is notorious for the blockbuster “When Summer Came to Nazira”. Tajaran telenovelas are also widely popular, with an audience beyond District Six’s population, including the rest of Mendell City. Aired during the afternoon, they generally deal with daily life melodramas and historical romances.

Despite the high crime rates, Little Adhomai has an active nightlife. Bars and clubs usually stay open until late, bustling with activity. Restaurants are specialized in serving Adhomian food, while other establishments have started to experiment with Tau Ceti’s cuisine, creating their own blend of Biesellite and Tajaran flavors.

The Imperial Plaza is the birthplace of the subculture known as the “Greasers”. Formed by young Tajara disillusioned with the life in Tau Ceti, they are characterized by a rebellious attitude, leather jackets and interest in Adhomian monowheels. They are often associated with delinquency, with some of them forming their own gangs or joining existing ones.

Gangs and organizations of Little Adhomai 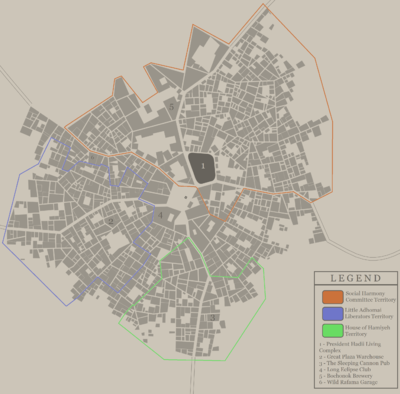 A map of Little Adhomai

The organized crime in Little Adhomai is dominated by three major factions, affiliated and funded by the existing Tajaran governments. Several minor and unaligned gangs still exist, but they are being slowly absorbed or displaced by ones supported by Adhomian powers. Violent clashes between those groups are common.

The largest and most powerful group is the Social Harmony Committee. They are funded by the People's Republic of Adhomai, operating under the guise of a harmless neighborhood association. This organization has the mission of enforcing the principles of Hadiism on Little Adhomai, something done through mandatory classes, communal meetings, curfews, and the establishment of guidelines in controlled areas. Many apartments in District Six are under the control of this gang, forcing its families to pay fees and conform to their rules. Tajara that have openly opposed the Committee, criticized the People’s Republic, or have blatantly ignored their laws while living in their territory; have vanished without a trace during the night.

Most members of this gang are hardline Hadiists or recent Adhomai-immigrants to Tau Ceti. Free housing, financial support, and honorary Party membership is granted to its associates. They operate under a rigid chain of command. A chairman, currently Tryahazkul Rhazikul, is quadrennially appointed by the People’s Republic to lead the organization. Typical Republican fashion, such as three-piece suits, is worn by the affiliates of the Social harmony Committee. Extrajudicial killings and extortion are offenses commonly practiced by this gang.

The Little Adhomai Liberators, also known as the Liberators, is the second most powerful gang in District Six. Pledging allegiance to the Democratic People's Republic of Adhomai, they have emerged from the union of independent groups. They seek to increase the autonomy of the Tajara community in Biesel, combating the exploitation brought by the presence of megacorporations. Operating through the use of semi-independent cells and flexible command, they utilize guerrilla tactics and motorized warfare while engaging their adversaries. The Adhomai Liberation Army has supplied them with military advisors, allowing them to set up training camps similar to the ones used in Adhomai. Their main source of income is smuggling contraband into Mendell City. Due to its decentralized nature, infighting is not uncommon among its ranks.

Most members of this gang are Tajara with criminal past or affiliations to the Adhomai Liberation Army. The Little Adhomai Liberators are known for their support of the Tajaran community in Mendell, hosting soup kitchens and other charity services. They are ruled by a council of gang representatives and ALA agents. Both traditional Adhomian and Biesellite fashion are worn by their associates. Smuggling and robbery are among the most common crimes practiced by this group.

The House of Hamiyeh, called “The House” by its members, is a New Kingdom of Adhomai aligned mafia operating in Little Adhomai. It was established by a landless noble family, the Hamiyeh dynasty, residing in District Six. Taking advantage of the lack of police presence in the Imperial Plaza, they have created an expansive protection racket system in the region. Businesses in their areas are coerced, usually through threats and violence, into paying fees to remain safe. The offer of abusive and accessible loans also plays an important role in their business, several families find themselves held hostage to them due to debt. The gang organization is based around the loyalty of other families and individuals to the head of the ruling family; ascension within its ranks is only possible with the approval of the House’s head.

Most members of this gang are Tajara affiliated with the New Kingdom and impoverished Adhomian nobility. Despite its illegal situation, the House is able to maintain order and solve most civil disputes that arise in their territory. Midhat Hamiyeh is the current head of the organization, inheriting his position after the violent demise of his father. Traditional Harr'masir clothing is worn by the affiliates of this mafia. Protection rackets and loan sharking are crimes commonly practiced by this group

Society of the Hidden Dusk

The Society of the Hidden Dusk, originally the Organization for the Study of Tajaran Past, is a secret society operating within Tau Ceti. Funded by Tajaran intellectuals and nobles after the first contact with humanity was made, it had the mission of exploring the Adhomian history in search of ways to combat the alien threat. Despite realizing expeditions across all Adhomai, the organization obtained no success. The Society fell into irrelevance after the end of the First Revolution. The remaining scientific interest was replaced by occultism and discredited theories; the outlandish belief that the Tajaran antiquity still held a mystic key to great power and fortune. Its members used the Nal’tor Museum of Mystery for their meetings, pretending to be a harmless circle of friends to avoid raising suspicions. Relying on the black market of relics and what little influence they had left, they continued their mission.

The ascension of President Njadrasanukii Hadii spelled doom for the Society. Branded as a subversive element, many of its members were arrested. Those who escaped fled to Tau Ceti. The organization established itself in Little Adhomai. Their ambitions are not limited to Adhomian artifacts this time; they seek to collect any object or occult knowledge available. Working alongside smugglers introduced the Society of the Hidden Dusk into the crime scene of Mendell. Theft and forgery are among its most common illegal activities. The organization also hires non-Tajara to act as their agents outside of District Six.

Posing as a monowheel club, the Raging Ha’rron Club is the last non-aligned gang that holds any considerable power in Little Adhomai. Formed exclusively by Greasers, they embody the subculture rebellious ethos by maintaining their independence from the Adhomian factions. One of their main characteristics is their fascination with monowheels; all members must own at least one before joining. Illegal street races are commonly held by the club as one of their main activities. Due to its emphasis on freedom, the leadership is heavily decentralized and decisions are usually made through a general consensus.

Regardless of the Club's attempts to resist the outside influence, their power is rapidly diminishing. Unable to compete with the gangs backed up by the Adhomian powers, they frequently lose members and territory to better equipped and prepared gangs. The Club’s future is bleak; their neutrality has doomed them in the ever polarizing atmosphere of the Tajaran Cold War.

The end of the Second Revolution created a large supply of unemployed Tajara veterans, many of them disillusioned with the armistice and without further employment prospects. Mercenary work became a clear path to this population. While many old soldiers sought megacorporations and independent careers, others decided to create their own organizations. Established in District Six, the Kazarrhaldiye Operations Group is the most notorious Tajaran mercenary organization. The group was created by veterans attempting to expand their operations and profits. Making use of Tau Ceti’s well-developed structure, they offer their services to anyone that is willing to pay.

Due to their uninterest in territory or influence, the Kazarrhalldiye Operations Group remains uninvolved in gang warfare. This stance is solidified by a pact with the warrings faction; the Group is forbidden from operating within Little Adhomai. To avoid infighting caused by the existing Cold War rivalities, mercenaries are divided into battalions based on their alignments. The instability brought about by the Solarian collapse created a future of opportunities for the company; they are eager to fight wherever credits takes them.