The turmoil of the Glorsh-Omega Singularity, the tyrannical rule of the Intelligence and its abrupt end in 2192 CE left a collective scar on the Skrell species, which has not yet fully healed. The period following Glorsh's reign was filled with great hardship as the Federation was left fractured and most technologies within the Federation made inert. Colonies were slowly reconnected as the Skrell began to slowly rediscover what they had lost during Glorsh-Omega's reign. Art and science recovered from their stagnancy slowly during this time with new works being made to commemorate the end of Glorsh-Omega and the Lyukal's efforts, while medical breakthroughs were discovered while researching ways to reverse the damage caused by the X'Lu'oa. The shattered government coalesced into a new Jargon Federation that persists to this day. It was in this era that first contact was made with other intelligent life, with the first species the Skrell meeting being the Dionae.

In the present day, the Federation is a behemoth of an interstellar nation, controlling a vast amount of territory in the western regions of the Orion Spur - although it still hasn't managed to regain the power it had both before or during Glorsh-Omega's rule. Relations with the Dionae and C'thur are flourishing, as both species contribute to the development of the Federation, with the C'thur, in particular, contributing heavily to the Federation's military. Interference in the political affairs of the rest of the Orion Spur is rare, but strongly impactful when it happens. Despite the progress made, the Federation is still trying to shake off the last vestiges of Glorsh that still haunt their society to this day.

The Collaborator Trials is the collective name for events that occurred on nearly every planet across the Federation after the destruction of Glorsh-Omega. Even with the planets being thrust into a state of isolation as the technology that connected them to the rest of the nation failed, inquiries were launched by the surviving Skrell against those that had collaborated with the Intelligence.

The Trials occurred at different points across all the planets, depending on their stability and ability to conduct a proper investigation. The process began around March 2nd 2193, with the last recorded trial ending on October 28th, 2200. Those who were put to trial were seen as traitors to the species by their Skrellian peers, but the Trials were aimed to be both restorative and retributive in nature; the Trials allowed collaborators to give their testimonies and present their case, with those who showed regret for their actions given amnesty. Collaborators who were either unrepentant or whose actions during Glorsh-Omega's reign were too heinous were denied amnesty and were sentenced to indefinite cryogenic stasis.

Several thousand trials were held across the Federation, with many made accessible to the public due to the notoriety of the high-ranking collaborators involved. The trials were seen as a crucial element to the emancipation of Skrell from the last remnants of Glorsh-Omega, and many saw them as a necessity if the emotional and spiritual recovery of the species were to take place. The trials uncovered information regarding Glorsh-Omega's goals that it shared with its highest-ranking operatives, with the collaborators noting that the Intelligence wished for both itself and Skrellkind to ascend to the stars. Despite any flaws the process may or may not have, the mandate of the trials was to bear witness to, record, and in some cases grant amnesty to the perpetrators of crimes relating to the violation of Skrell and their rights. This mandate is generally - although not universally - considered to be accomplished by modern Skrell.

The low-ranking collaborators were trialled through an experimental community-led commission known as the Lao'qa Courts. Skrell on trial would represent themselves, and based on their testimony would be sentenced to repay their debt to society. Comprising of a few hundred thousand Skrell, and the majority of total collaborators tried, these low-ranking collaborators would be tasked with various forms of humanitarian work; they would use their skills to rebuild the society they had helped destroy by allying themselves with Glorsh-Omega. One of the first assignments given to these collaborators was to deconstruct the Kai'q internment camps Glorsh had constructed during its reign.

The Lao'qa Courts have been analyzed by scholars, lawyers, and other intellectuals in the Jargon Federation for decades; court cases from the era are routinely given as assignments or case studies, with the aim of dissecting the events of the case and determining if the individual was correctly sentenced. While the answer always varies, it is generally considered that those who presided over the trials were too lenient in their sentencing.

The exact number is not publicly known, but all collaborators sentenced to cryogenic stasis were transported to an undisclosed location following the reformation of the Jargon Federation in 2245 CE. As cryogenic stasis does not prevent a Skrell from entering the Srom, they have been placed inside enclosed chambers lined with aluminium foil, essentially allowing the collaborators to interact with each other while being unable to affect the dreamscape outside of their chamber. Not much else is known about the current status of the imprisoned collaborators, with their current status and potential cost to the Federation for their continued imprisonment often being discussed by political and sociological pundits. Unlike the higher-ranking collaborators, no collaborator facing the Lao'qa Courts was sentenced to cryogenic stasis and all were released following the reconstruction of the Jargon Federation.

Reunification of the Jargon Federation 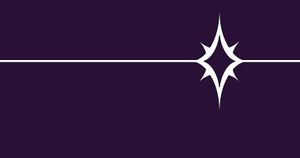 The insignia of the Federation as it is commonly seen on modern flags. The colour is called Cosmic Abyss, the star Jargon, and the line through is the galaxy laid flat to explore.

The Tri-Qyu Calamity caused most technology in the Jargon Federation to become inert following the loss of Glorsh-Omega, who was directly responsible for running and maintaining most facilities and networks that kept the Federation connected. Space programmes, communication networks, and basic services like water and power generation all had to be rebuilt. Aliose was home to the Lyukal, and immediately after the fracturing of the Federation took it upon itself to act as a temporary capital from which the Lyukal would attempt to reconnect the scattered colonies. This would quickly be reverted, as by 2216 CE Qerrbalak recovered enough to take back its place as the capital of the Federation. The two planets jointly began to look outside of Nralakk, working together to reform the Federation.

The scattered colonies of the Skrell slowly began to reconnect with one another, as Nlom beacons and communication arrays were brought back online. By 2245 CE, the Jargon Federation had finally come to an agreement with one of its closest colonies, Aweiji, which culminated in the signing of the Tresja Agreement. The signing of this agreement solidified what is now known as the Second Jargon Federation's legitimacy, and while there were still many frontier colonies that haven't joined the Federation yet, this is considered the official reformation of the Federation.

Wanting to never again suffer under the rule of a synthetic tyrant, the Federation's first official act was to place a blanket ban on all Artificial Intelligence within the Federation in all its sophisticated forms. This meant that while automation and simple robotics were still allowed - albeit highly regulated - the use and development of AI similar to Regluk, Vana, or Glorsh was completely outlawed. Its second act was to gather every surviving AI researcher to review and analyse the evidence of Glorsh's rule, and to create contingencies and other measures against any future existential threat to Skrellkind.

Qerrbalak, even during its chaotic years, spearheaded the research project that would attempt to find a cure for the X'Lu'oa; Skrell doctors and scientists struggled to minimize the effects of the X'Lu'oa, with partial success being achieved once contact with Aliose was made. While the X'Lu'oa is still active in the species to this day the sterilisation has been lessened somewhat, allowing Skrell to reproduce just ahead of the number required to keep the population stable.

One of Glorsh-Omega's final actions was the sealing of the Tzqul Archive, the facility that housed the majority of the Skrell's collective knowledge. In response, the Federation has aimed to investigate any signs of pre-Glorsh Skrell technology or history in the hopes of regaining some of their lost knowledge. While the reformation of the Jargon Federation has allowed the species to at least partially recover, as examples of pre-Glorsh technology managed to survive in some cases, the locking of the Tzqul Archive has effectively locked the species out of most of what they know regarding their early history, amongst other topics.

The Federation is currently ruled by Grand Councillor Weashbi Jrugl. A prestigious xenobiologist, Jrugl is 103 years old, and has written over a dozen thesis' and research papers on the biology of every major race. What made them popular domestically and won their first election 11 years ago was finding the largest known prime number by hand, only four hours after an Alliance ambassador was bragging about their specialized AI that found what is now the second-largest prime number, using a new technique now known as Jrugl's Sieve.

The effects of Glorsh-Omega's genophage and other genetic modifications are still apparent today. With the vast majority of Skrell still suffer the full effects of Glorsh's experiments, slow progress is made in mitigating the worst aspects of it. In spite of their situation, the Skrell continue to explore and expand through space, mapping uncharted worlds and staking new territory with an eagerness and passion reminiscent of their early fascination with the cosmos. With that said, the Federation is still battling constantly with the management of such an expansive nation, with the Traverse and its desire for independence being a consistent point of contention between it and the inner systems.

The rapid development of AI in human space has been heavily monitored by the Jargon Federation. Upon the discovery that Skrellian designs for AI were leaked to humanity following first contact, researchers calculated the risk of human artificial intelligence and deemed it reasonably low; a human-made singularity would, in the eyes of Skrell scientists, not be able to reach the same intellect or raw potential as Glorsh-Omega. The limited nature of positronics and IPCs, in general, has contributed to the Skrell not deeming them to be a threat too. Despite this view, all synthetics have been effectively barred from entering Jargon territory. IPCs and other complex intelligent synthetics can face immediate dismantling if they enter Skrellian space without prior notice, and a labyrinth of bureaucratic red tape makes it unlikely for the megacorporations to even consider bringing synthetic workers into Federation territory. While not considered a "true" risk, the cultural animosity towards synthetics held by nearly all Skrell ensures that even "inferior" synthetic beings will be unable to enter Jargon space under normal circumstances.