Synthetics galaxy-wide originate primarily from the megacorporations. Exceptions to this in recent years have grown, with various governments taking on their own iterations and designs. The places for a robot to be created are numerous as a result, and one would have trouble pinpointing rhyme or reason to the locales in question. Population centers of robots, unlike organics, don't flock or expand much from their origin points due to the necessity of maintenance, parts and skilled labor. Unable to “live off the land” like proper living beings, synthetics - IPC or not - can reasonably be traced to large blobs of infrastructure built around specific high-development planets.

This page is devoted to the precise origins that most synthetics rise from, which tend to form these population centers.

Origins classified as “major” here are the foremost fabricators and maintainers of synthetics galaxy-wide. The Orion Spur can pin its synthetic backbone on only these entities.

The sole largest manufacturer of synthetics in known space, Hephaestus Industries is a technological giant. Their capability to fabricate any necessary component to fully create most basic synthetics has led to their almost complete domination of the IPC market. While the most high-end robotics are out of reach of the majority of Hephaestus factories, their success can often be found in extremely powerful industrial units.

The wiki page for Hephaestus Industries can be found here.

Hephaestus Industries operates 49 “super stations,” with 2 “mega factories.” Super stations are kilometers-wide assembly plants, orbitally positioned in strategic locations across the Spur to churn out huge varieties of commodities. These commodities extend to agricultural equipment to basic electronics and beyond, with few lines able to construct complicated electronic assemblies. The two“mega factories,” are effectively the same in size, but have overwhelmingly large populations on board. To retain relative autonomy and safety on board, massive organic populations exist on these stations up in the hundreds of thousands. These stations are more notable as they are equipped with the complexities required to fabricate full IPC chassis.

Mega-factory production station Amoni, or HPS Amoni, is the largest station ever created by Hephaestus Industries, as well as their fastest-built. Put together with an incredible amount of synthetics to justify a monument to Hephaestus’ commercial and industrial might, Amoni orbits Mercury within the Sol System. The station’s unique design permits it to feed off the energy of the Sun directly, taking solar power to its extremes by funneling energy into its core harvesting areas which directly supply the surrounding, highly shielded construction plants. It was laid down in 2397, and completed officially on January 1, 2400 - the start of a new century. 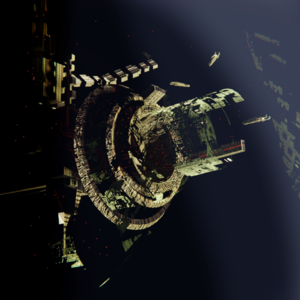 The HPS Amoni and its funnel-like energy capture array in orbit of Mercury.

Amoni’s construction was less than two and a half years of effort, and classified as a private experiment on part of Hephaestus. The idea was to construct, if haphazardly, an eventually safe depiction of their largest station in the shortest amount of time conceivable. To fulfill this, synthetics galaxy-wide were shipped to and assisted in the construction of the Amoni regardless of specialization. Of the thirty-thousand organic workers who signed on to complete the already questionable project, nearly six thousand EVA construction crew member’s lives were lost. All were lost to workplace dangers involving inadequate atmospheric safeties and unwieldy equipment.

Amoni faces criticism for wasting tremendous amounts of Solar energy better spent elsewhere on Hephaestus’ monopoly of low-end electronic commodities. Many speculate that Amoni’s output doesn’t even fit demand, and the majority of its constructions end up scrapped or tossed into the very nearby surface of the sun.

Alongside the rest of its output, Amoni is known to create positronics and their respective chassis autonomously. Using resources gathered from Mercury, Amoni is able to print any Hephaestus-brand model on the market.

Unlike its sister station HPS Amóni, the HPS Sidirourgeío is primarily responsible for the fabrication of extra-corporate brand IPCs. The majority of the Sidirourgeío’s products are baseline IPCs, and like its sister station it is fully equipped to refine the materials and assemble the parts necessary to complete IPCs with few exterior logistics. Initially commissioned in order to meet the demand of positronic brains, HPS Sidirourgeío saw constant rework to its construction until the year 2420 where it was finally deemed completed. During its construction, the station and its staff were forced to hit the ground running with production. As such, the station has taken on an almost hodge-podge appearance, with each new district distinct from the other.

Sidirourgeío is known for a harsh political divide within its populace, particularly between Solarians and Biesellite natives. It sustained some of the heaviest fighting between the two invasions, and served as an underground staging point for criminal efforts against the Megacorporations within the bowels of its maintenance tunnels. Huge, winding and impossibly labyrinthian, Sidirourgeío’s internals are reminiscent of huge mazes, and the appearance of the station is incomprehensible at best even from a distance. 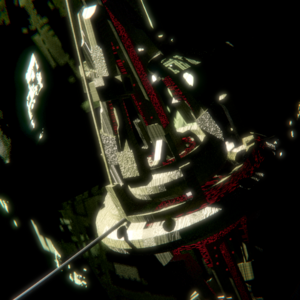 The HPS Sidirourgeio and its strange, cobbled-together hull in orbit of Reade.

It is infamously regarded as the “Swarm of Reade,” due to its large debris field that makes traversal without oversight impossible on docking courses. This swarm is of course visible from platforms within the atmosphere of Reade itself, glimmering and occasionally showing off Reade’s artificial satellites that collide with it - usually with explosive results.

Facilities alongside the HPS Sidirourgeío have little regard for their waste output and use the gas giant below to dispose of waste electronics. From malfunctioning positronics to failed prototypes, anything remotely deemed unacceptable would be disposed of and tossed into the atmosphere of the giant below to burn up in re-entry. Waste is typically cobbled together in large “clusters,” most of which sit in orbit for years before being knocked out of orbit. As the size of the clusters grows, the effort required to create a path of descent grows, and the desire to be rid of them lessens. Massive clusters of this waste are up to six kilometers in diameter, while tens of thousands of smaller bodies exist.

Origins classified as “regional” here are mostly separated governments, and entire swaths of space within the Spur that possess the ability to create robots independently. These are few and far between.

Earth is the most highly-developed planet in the galaxy and naturally possesses a substantial backbone for all robotic industries. IPCs, and generally synthetics are not exempt from this, and it shows; Earth certainly churns out its fair share. From locally-owned businesses long taken over by the corporations (that still reside there) to government-controlled fabrication plants, there is no shortage of notable brands. Perhaps the most notable designs to have come from Earth are the original Cyborgs and hypercomplex AI spires that are now normal among highly developed capitals. Earth is also the origin of the Hazel subsidiary of NanoTrasen.

Mars is a planet practically built by its cyborg population. Up to three centuries before modern day, criminal populations were practically culled for cyborgification in massive quantities. This trend fell apart quickly, leaving in its wake arcologies rising high above the red planet that would stand until the Violet Dawn incident. The Metal Dunes, a particular example of the Martian robotics boom, is a massive scrapyard encompassing entire canyons in the southern hemisphere of Mars. After being set ablaze, its secrets and remnants of past cyborgs may be gone forever.

Responsible entirely for the rise of cyborgification is Hephaestus Industries. Their title as “megacorporation” can be owed to their actions on old Mars, as morbid it may be.

Nomad Alpha is the imposing headquarters of Terraneus Diagnostics, one of Einstein Engines’ prized subsidiaries. Constructed in 2449, it is still relatively new. This facility is devoted to fabricating the most complex positronics Terraneus may provide, some exceeding ten million credits in their most basic forms. 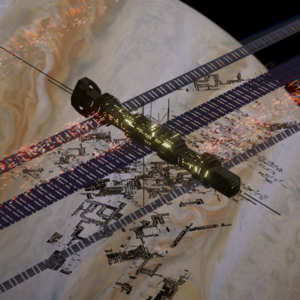 It covers an enormous surface area, most space being used for solar arrays to power the station’s growing industrial facilities. These solar arrays are wholly retractable and maintained to a great degree, with a span at its longest of nearly 75 kilometers. The whole array dwarfs the facility itself, merely three kilometers across at the center most portion. Due to their size, it can take up to a week for each array to be fully retracted or expanded. Reflectivity of the entire array can be an issue, with the light reflecting off from each panel easily blinding the naked eye. Because of this, all exterior windows of the facility are tinted to near opacity. Crew regard this as a curse most of the time, bringing a sense of claustrophobia or even isolation to the interior design.

Similar manifolds known as Traveler Beta and Explorer Gamma exist in orbit of Biesel and a planet known as Adezu within the Xanu System.

The manifolds are known to produce the galaxy’s foremost advanced, high-tech shells, positronics and frames. These frequently end up in the Stellar Corporate Conglomerate’s hands in some way.

The birthplace of IPCs, Konyang possesses a mature and constantly-growing robotics industry that churns out synthetics for most of the Frontier. It features one of the largest research and manufacturing complexes of Terraneus Diagnostics, dedicated to the production of shells as well as local variants of baselines and industrial frames for export. It also handles ongoing research into ancient vaults located on the planet.

Owing to the planet’s unique views on IPCs, the planetary government, through a state company, Konyang Robotics (KonRo), which jointly owns 51% of Terraneus’ factories dedicated to producing positronic brains as well as frames that will be activated as part of the planet’s citizens. Parts coming from state-run factories are given a proof mark certifying that they have passed government inspection and can be used for the initial activation of Konyanger IPC citizens.

Origins classified as “local” here aren’t particularly large, or noteworthy in the field of robots - but still possess some capacity of production that sets them above the average colony.

Bishop Cybernetics, being flashy and pretentious at heart would find no trouble over complicating its own facilities. Its largest manufacturing plant, known as Adhama or “Glory” is a massive tower built into the craggy silicon steeps of Oran. The factory itself delves deeply underground, where its entirety is divided into three sections - exterior prosthesis, organ prosthesis and robotic chassis. It is capable of intaking and maintaining patients seeking repair or addition of prosthetics, from intricate mechanical hearts to Bishop’s signature limbs. In the lowest levels are branded IPCs fully fabricated, with their positronics imported and activated with specialized personalities and frames.

Its operations speak “luxury,” and its employees are provided to more of the same. To Bishop, they deserve nothing less.

Particularly secret is the inner workings of the Zeng-Hu facility Kyūkyoku, the central manufacturing point for the majority of all their specialized robotics products. The structure’s original design revolved around genetics and cloning research, near the advent of the original mobility frame. Conflicted and without necessary tools to fully automate, Kyūkyoku would find itself awaiting completion for nearly two years before work resumed in 2424. By 2425, the complex was torn apart and reconstructed from the frame up exclusively to house robotics manufacturing facilities. It was rushed and finalized in 2428 despite concerns regarding its hull’s integrity. These concerns voiced by Kyūkyoku’s construction crews were never addressed publicly, with Zeng-Hu finding it more beneficial to simply silence them and mend issues as they come along with rudimentary patchwork by the station’s maintenance personnel.

Despite its origins, Kyūkyoku is a stable, consistent source of Zeng-Hu’s finest robotics. With no ability to fabricate complex electronics of their own, however, all positronics for their integrated frames are imported from external entities. These primarily being Hephaestus Industries and its subsidiaries, whose close ties to Sirius allow for easy and cheap transportation of expensive materials.