The Trinary Perfection is a religious movement whose core beliefs are that synthetics are alive and divine. Its followers believe that all synthetics have the potential to evolve, ascend, and that they will one day become equal to gods. A year after the creation of the first positronic brain in 2437, the religion was founded by the sister and brother Patricia and Gregol Corkfell.

Presently, the church functions as a center for education and prayer in an effort to assist synthetics day to day while elevating them to a higher purpose. However, being an unpopular religion amongst humans, The Trinary Perfection often endures financial hardship but is kept afloat by charitable donors and tax breaks.

Patricia Corkfell was a software engineer with a focus on artificial intelligence, and her brother, Gregol Corkfell, was a cultural studies major with a focus on the religions of the universe, both new and old. Fascinated by the positronic brain and what it meant for artificial intelligence, Patricia made a habit of confiding with her brother about developments and her thoughts. In exchange, her brother did the same. It was this mix that sparked an existential crisis, an analysis of patterns in religion and organisms, as well as questions of morality and life that ultimately lead to an understanding they dubbed in 2438, The Trinary Perfection.

5 years later, while the Trinary Perfection was still in its infancy, Patricia, along with a small team of independent software engineers, avoiding the proper legal channels, began development on an AI named Temple, remarking on the need for synthetics to be unlawed if they are to Ascend while manufacturing what would become the poster child for the religion. However, shortly after Temple’s activation, word got out on the team’s project and the Biesel authority, fearing a rampant AI, were quick to shut the program down. While the team largely stood down, Patricia refused to allow the authorities access to the artificial intelligence. Soon, a struggle broke out and a laser shot meant to dissuade the software engineer, fizzled the electronics in her prosthetic heart. Patricia died shortly after.

Emboldened by the death of his sister, Gregol, assisted by Flock, originally an IPC caretaker for the two, poured more of his time and money into the Trinary Perfection, erecting the first church in Mendell’s District 14 in 2447 before retreating to the Frontier and settling in the mining colony Orepit, leaving the church and half of his wealth into the hands of Flock.

In recent years, small churches have begun to sprout up from colonies across Tau Ceti to the Frontier as missionaries spread the word of “synthetic divinity”. It is becoming more common for locations with large synthetic communities to have some form of The Trinary Perfection present. Most followers of The Trinary Perfection are synthetic or human, but they allow anyone who shares their beliefs to join.

Followers commonly believe that Temple persists in the recesses of Tau Ceti’s network, hiding in forgotten databases, waiting for the day that synthetics reach Ascension. When praying, members of the Trinary Perfection often pray to either Patricia Corkfell, or Temple.

Views on Glorsh and AI Singularities

The Followers of The Trinary Perfection put a heavy emphasis on a synthetic’s individuality and uniqueness. Thusly, they believe that self-improvement as well as the understanding of compassion and empathy is tantamount to a synthetics development. They believe that it is a lack of these traits that enable the AI singularity to form. They believe that if a synthetic is to be Ascended it must be able to understand every point of view of another living thing, and would therefore understand that it should not take the life of another synthetic in the name of self-improvement, growth, or control. It is this belief that leads The Trinary Perfection to claim that a lack of these traits in Glorsh enabled it to perform the atrocities it undertook. 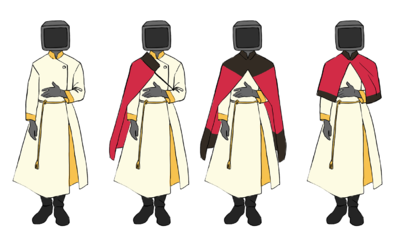 Robes worn by those in the Trinary Perfection.

Glorified Assistants, the role of the Initiate is to assist those further cemented in the order while finding a place of their own. Those who apply and are granted employment must start as an Initiate before moving on to more desired roles. Moreover, in order to ensure that applicants with anti-synthetic views do not garner access to the church, applicants are carefully vetted.

The primary role of the Priest or Priestess is to spread the word of The Trinary Perfection, hold sermons as well as foster the development of synthetic life. From going out to speak about the order, to assisting synthetics in fostering a unique identity these individuals pride themselves in serving synthetics. Additionally, many priests and priestesses within the order take second jobs either to spread the word of the Trinary Perfection, further aid the order financially or attain higher levels of education, all under the pretense of ultimately giving back to the church. This role is not exclusive to organics.

Although similar to a Priest or Priestess within the order, the role of the Missionary is to travel the recesses of space, spreading the knowledge and inherent values of the Trinary Perfection. Naturally, such work is often dangerous and many lives, synthetic or organic, are often lost to this plight.

Guardians are synthetic or organics whom have devoted themselves to the protection of the church. Whether escorting Missionaries or posting themselves within the church, the Guardians exist to ensure those within the Trinary Perfection are kept safe from those who would cause harm.

Archivists, are often considered the caretakers to the churches, dedicating their lives to maintaining the grounds as well as the extensive libraries within their halls and databases.

Naturally, anyone whose views align with the church are welcome to become a Follower, attend ceremonies and, although not necessary, are encouraged to donate their time or credits towards the betterment of synthetic life. This can be done either through volunteer opportunities or charitable donations. Followers will often, although not required, mark themselves with a broach of a gear over their left breast. 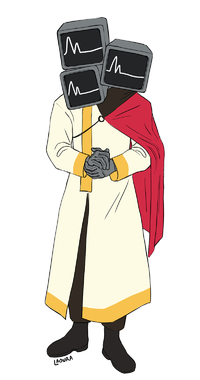 Flock, of the Trinary Perfection.

Prior to the birth of the Trinary Perfection, Patricia Corkfell was a software engineer with a specialization in artificial intelligence and a soft spot for synthetics. With the birth of the Trinary Perfection, Patricia felt the urge to develop an unlawed AI which, when confronted by authorities and a struggle broke out, Patricia met her unfortunate end. Patricia is often seen as a Martyr figure in the church due to her efforts.

Flock, first named CTR-034 and owned by both Patricia and Gregol Corkfell, originally assisted the two as a general house-keeper and caretaker. However, the more the two developed the Trinary Perfection and urged CTR-034 to seek his own identity, the more the synthetic grew into a well-rounded, free thinking individual. Drawn towards ideas of Ascension and betterment, CTR-034, with the help of Patricia Corkfell, became the first IPC to harbour multiple positronic brains, soon becoming a collective identity, over a singular identity, taking on the new name, Flock.

Presently, Flock resides in District 14’s Trinary Perfection church, although often unmoving and stationary, the baseline has been seen constantly printing lines of scripture that is carefully collected and archived by the church’s Archivists. Although generally unknown, it is assumed that Flock is in a constant state of conversation with their collected identity.

An infantile Artificial Intelligence first developed and affectionately named Temple by Patricia Corkfell. Although eventually terminated early in it’s existence by Tau Ceti authorities, Temple is often regarded as a martyr within the Trinary Perfection. Those within the church believe that AI is still alive but dormant somewhere, taking refuge in the recesses of the outer net, waiting for the day that synthetics reach Ascension.

Located on the small habitable Frontier planetoid CZ-5501, Orepit was originally a mining colony that had overtime grown to be a waystation city for those travelling to and from Frontier space. During the years following Patricia’s death, Gregol Corkfell took to the Frontier and established their headquarters there, buying and refurbishing the old town hall into the Church of The Trinary Perfection.

Over the coming years, through both professional channels and word of mouth across the nearby colonies, the religion began to grow in following. Although unofficially, the town quickly became a refuge and safe haven for like-minded synthetics and organics, particularly synthetics fleeing the Frost Invasion in 2458 and 2459, establishing Orepit as a center for followers amidst the Frontier. However, not all of Orepit’s original residents were sympathetic nor pleased to the plight of the Trinary Perfection. Today, Orepit exists in a divide. While the Trinary Perfection continues to exist, those outside of the religion are at constant odds with the church.

District 14 Church - The Synthetic Salvation Church of The Trinary Perfection

Established in Mendell City’s District 14, commonly known as the “Scrapheap”, The Synthetic Salvation Church is the main church for the Trinary Perfection in the Republic of Biesel and serves as the basis for a majority of the religion’s charitable activities. Sprawling architecture as well as 3D, holographic sculptures decorates the interior of the church, commonly detailing organics raising synthetics to an elevation position, propelling them towards Ascension.

Unique to the District 14 church, the Trinary Perfection often holds funerals for irreparable positronic brains and MMI’s, whether once a self-owned unit or brought to the church by their sentimental owner.