Positronic brains are supercomputers of immense capacity capable of processing the hardware demands of modern artificial intelligence. The gold standard for Positronics is the basic capacity for sentience or the ability to mimic it. In the face of Biesellite law, all Positronics are in some capacity sentient to a degree which affords them civil rights. This means that all Positronics share intelligence at least comparable to the Human mind. The facts behind this are in debate across the galaxy, as every entity views these brains differently. Interestingly, the lowest class of brain exhibits unusually powerful processing limitations for its size.

This page is heavily tied into the main IPC page and should be treated as an extension of it.

Positronics possess uncannily similar structures internally to most humanoid brains. While cubical, two hemispheres and a stem are still inside. These operate similarly in function, with critical processing hosted in the hemispheres whilst the stem serves as a neural transmitter.

Positronics possess critical sensory apparatuses, such as means of touch, pressure detection, and in niche cases, scent and taste. Optional but common additions include sight and audio receivers for the base brain, but these are more commonly delegated to the chassis itself in design. Positronic brains are often equipped with a number of outputs to aid technicians, mounted on the exterior of the metallic casing. These outputs include several ports to interface with chassis, a microphone and rudimentary cameras to aid positronics and processing input when not attached to anything, LEDs to indicate status, and a speaker for communication.

The original design of positronics comes from the processing units of ancient mining robots on Konyang in 2406. Since then, human positronic design has completely surpassed these machines, with new innovations and optimizations being constantly invented. The actual design of the original Positronic Brain is questionable at best, its origin as an alien creation remaining a closely guarded Einstein Engines secret.

They typically come in the form of a 15x15 cm (6in) plasteel, titanium alloy, or platinum alloy cube. Most positronic designs heavily mimic typical organic brain structure in order to match the responsiveness of a human brain. Due to the prevalent risk of electromagnetic shocks, some positronic brains are also fitted with an internal faraday cage that allows them to be safely reactivated in the event of a shutdown during any such event. Owing to the extremely complex nature of positronics and while most large corporations have at some point created prototypes, the dedicated infrastructure for the development and production in industrial scales is reserved to only a few, namely Hephaestus Industries, Einstein Engines and Zeng-Hu Pharmaceuticals. While these manufacturers have developed their own lines of frames, many of their positronic brain designs are available for purchase; many other corporations and governments alike negotiate deals and place bulk orders for positronics aimed for their own IPC and android lines.

The capacity of a positronic brain is directly tied to its generation and level of technology, the newest models possessing smaller and more efficient internal parts. While even the most basic of brains is extremely powerful and very capable of environmental analysis, understanding of oneself and completing assigned tasks, the difference with more advanced models lies largely in the social, behavioral and machine learning aspect. However, since it is only natural that the more potent the hardware, the higher the price, the various types of IPCs and Androids end up fitted with a positronic brain most appropriate for their designated purpose. For instance, millions of units fielded for dangerous or menial tasks are installed with lower end positronics, lacking in social intellect and appearing much more mechanical in their ways compared to a high end shell frame, designed to blend in with human society.

Positronic brain memories are handled separately from their base programming. Most positronics brains are programmed to record all inputs such as audio and video, scrubbing entries from their memory that are regarded as unimportant, such as time spent waiting. This process is not automatic and can be controlled by the android itself, and in some cases, a corporate positronic can be programmed to scrub sensitive data on command. The typical storage capacity of an IPC for pure, unfiltered memories is projected at about sixty years, although recent projections and advances in positronics have disputed this claim. 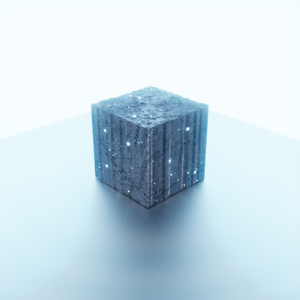 A positronic brain, four inches to each side. It's a cube.

Positronic brains, after they are activated, are considered black boxes - the interplay of memories, knowledge, and base programming, means that taking any one of those factors out would result in massive instability in the brain that would require a near total wiping of memories and a reboot to fix. The more advanced a positronic brain, the greater the potential damage from a deactivation. The number of publicly-known roboticists in the Spur capable of partially removing a positronic’s memories without damage is currently 6, mostly in the employ of megacorporations. Terraneus Diagnostics has recently announced a program to develop brains with the capacity for safe removal of memories, although it remains experimental and not yet ready for public release.

As some positronic brains are equipped and programmed with the ability to receive additional modules, datapacks have become a thriving business in the robotics community. Datapacks are small chips or drives that can interface with the brain in order to add knowledge. Common examples of datapacks include skill sets, directives and laws, language and accent chips. Although many datapacks download knowledge directly to the brain, some interface with the chassis a positronic is connected to in order to preserve the space on the brain. This means that a positronic can literally have its knowledge ripped from its brain. This level of modularity is usually reserved for non-IPC chassis; IPCs lack the space to store bulky datapacks that can be changed without causing damage day to day.

Memories are essential to a positronic’s conception of reality. Positronics develop skills through a mixture of knowledge and memories. Knowledge loosely translates as the technical know-how to perform an action; a specific surgical procedure, for instance. A positronic utilizes memories—real-world context and experience—in order to apply its knowledge. This means that whenever new knowledge is installed in the form of datapacks, an IPC requires experience to fully develop and perfect its craft; big corporations relying on high standards such as Idris in the service sector or Zeng-Hu in medicine, always require their IPCs go through basic orientation lasting usually from a week to a month. This is widely considered as the synthetic substitute for education, condensing years into weeks.

All IPCs gain job experience the longer they are occupied in it, extracting further knowledge than what was originally installed. More advanced positronics have the ability to pick up new skills entirely out of experience, just like a regular person would. Many have theorised the possibilities of allowing IPCs into the proper education system, experiments having confirmed that positronic machine learning has advanced enough for them to be taught new trades and theories in classrooms or with appropriate reading material. However, outside of worlds such as Konyang, no real effort has been made to admit synthetics into classrooms, considered a waste of time and resources

In order to direct a positronic, laws, directives, and behavioral cores can be installed to their frame. Manufacturers have shied away from programming laws and directives onto the brain itself as this risks a lack of flexibility and adaptability; the main purpose of a positronic brain. Laws are sets of code designed to be “hard restrictions” that can be easily uploaded without having to come up with an action for every possible situation. The more complex a positronic brain, the greater the chassis needed to handle the laws, meaning that laws are typically not used on IPCs. Directives can be loosely translated as “objectives” and outline a series of outcomes that need to be achieved. Directives are more flexible and can be installed on IPCs. Behavioral cores are highly experimental versions of directives that attempt to assign "right and wrong" to a number of actions and drive a positronic to rank their objectives in a “right or wrong” fashion and act accordingly. They are not well understood and typically derided as moralistically-designed directives.

Creating software for positronics, as well as the firmware for android and IPC chassis is remarkably easier than the construction of a positronic brain, and as such, all megacorporations, many state actors, and even several hobbyists have developed their own software in order to tailor their machines to their specific needs.