Despite only being present in the Orion Spur for a few years, the Vaurca have managed to colonize a few worlds of their own, whether being given them by someone else or taking them of their own volition. Most of the time nobody makes attempts to take these worlds away due to the fact they are usually uninhabitable to other species anyway, and also tend to have high concentrations of K'ois, a deadly Vaurca fungus.

A Desert planet found in Tau Ceti within the Republic of Biesel, Luthien is home to a large amount of Vaurca (mostly from the brood of Xakt, Queen of Corpses) and a few colonies of humans near the poles. It has a thin, unbreathable atmosphere and a small amount of water. Despite the conditions, The Vaurca's adaptability to rough terrain has allowed them to make Luthien their home. at least for some of them. As with most Vaurca colonies, they mostly consist of large, elaborate tunnel complexes that stretch far beneath the sands and heat of the surface, most of the colonies having rooms dedicated to reclaiming augments and tech from fallen Vaurca and retrieved hiveship parts.

Another thing to note about Luthien is its clear K'ois presence, as many areas of the desert planet can now be distinguished by their uncanny yellow sheen as the fungus grows just barely in control, twisting through and even under the dunes. This leads to some strife with the small human population near the poles, as bouts of mycosis are semi-common and have lead to calls for help multiple times.

On the other hand, some humans have found cooperation to be of value with the Zo'ra, allowing them to work in their laboratories scattered throughout the planet as they can typically be relied on to keep secrets and are invaluable for their VR and general scientific ability. 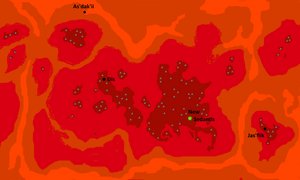 A map of the planet Caprice. Dis and the capital of New Sedantis are visible. While this is not all settlements on the planet, this map showcases the largest of them.

Caprice is a scorching hot, volcanic planet in Tau Ceti that is mostly devoid of any life, other than the Zo'rane brood of Zoleth, The Herald of Scars, who have been stuck on the planet for the past five years, struggling to maintain the brood and expand at the same time to not much success. The surface of Caprice is host to incredible temperatures in certain spots, so colonies are almost exclusively created in underground complexes with only a few exceptions. These colonies usually focus on maintaining whatever k'ois farms they can and excavating larger caverns for Zoleth's needs, as well as having significant Cephalon storage units and armories spread throughout the planet for Zo'rane use, the latter causing strife with Tau Ceti's government.

Despite what it may seem, there is progress being made on Caprice on a consistent basis, with the planet importing the most construction materials throughout the entire Republic on a daily basis to fuel the expansion process. The cavernous colonies are constantly upgraded and shaped to the point they rarely even look like caverns to begin with, instead beginning to look like underground cities, though the construction process is still slow.

Since Zoleth's brood is the unofficial "Warrior brood" of the Zo'ra, they have a far more significant number of Za and Warforms in particular than other broods of the Zo'ra, so much so to a point where there is a special, government run facility near the south pole commonly referred to as "Dis" that has the specific purpose of storing all inactive Bound Warforms on the planet for very close supervision, as well as housing the Caprician embassy the Tau Ceti government uses to communicate with Zoleth, on top of many other official functions. While Zoleth does not approve of the government supervision, she makes no attempts to undermine it or defy it in any way.

A small, mountainous planet roughly a third of the size of Moghes located in Uueoa-Esa, Tret contains a wealth of various minerals left over from the planet's previously volcanic past. Tret was given to several hundred thousand K'laxan colonists by Lord-Regent Not'zar Izweski as a world to grow their hive upon. In exchange, The K'lax hive provides bountiful labor, research, and levies to the Izweski Hegemony in what is typically criticized as complicated slavery, although the K'lax do not tend to speak out against it themselves. Most of Tret's colonies are a mixture of underground tunnel routes and surface level complexes dedicated mostly to mining and the creation of technologies, with Ka from Leto's brood being found near everywhere on the planet in spades.

Due to the mineral content of the planet, Hephaestus Industries has taken an interest to the planet, and around 14,000 humans are present in mining colonies spattered across it's surface, constantly being encroached upon by the K'lax. Despite the circumstances, Hephaestus has been more than willing to cooperate with the hive, offering them jobs both in the facilities on Tret and beyond, including places such as Tau Ceti. This means the workforce on Tret is increasingly more favorable of Vaurca, both for their work ethic and ability to operate in dangerous conditions. The most recent fruits of this cooperative effort is the construction of the new Orbital Factory above Tret revealed in 2462, which has been supplying much of the Hegemony with manufactured materials and uses a majority Vaurca workforce with a Unathi minority. The most prevalent feature of this factory is the inclusion of a K'laxan Neutron Forge, capable of rearranging the atoms in any material to turn it into something else (except phoron).

Due to concerns revolving mycosis on the still remaining human population of Tret, all K'ois farming has been conducted on asteroids in a field near Pid, Tret's moon. This form of agriculture was devised by Leto, The Seeker and is slowly reversing the effects of famine on Tret's populace, although it has caused some discourse with the Unathi community of Uueoa-Esa as any ships passing near the deathly yellow glow of the asteroids are often infected with its spores, leading this field to be known as "The Cursed Asteroids". 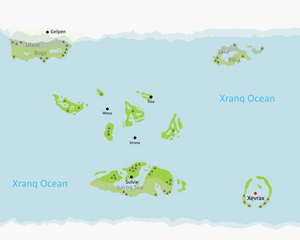 The Nralakk Federation planet Diulszi. Visible are multiple settlements, with the settlements of Gelpen and Sulvix largely being used for research, and the three cities around the equator purposed as tourist locations for Nralakk Federation citizens and otherwise. The city of Xevrax, visible in the bottom right, is off limits to everyone but C'thur and authorized officials.

The C'thur hive have, with one real exception, no planet to call their own. They have instead intermingled with Federation society near seamlessly, being offered citizenship and places to stay and work within the Federation whilst being left to their own devices. The only real catch being that they must leave Federation space to have dealings with any megacorporations such as Zeng-Hu, the EPMC, or most notably, Einstein Engines. For the latter, the Corporate Reconstruction Zone around Tau Ceti and Frontier space are used heavily for facilities involving C'thur and Megacorporation collaborating, as well as a few spots around Epsilon Eridani.

The one exception to the C'thur's lack of planets is Diulszi, otherwise known as Glorashi 4. This planet is inhabited by a large majority of C'thur, and a minority of Skrell. Most of the planet is used for technological research and, in a few cases, resorts run by the C'thur for extra income. The city of Xevrax hosts the location of High Queen C'thur, currently being treated for her injuries. The city and the surrounding area is off limits for everyone aside from the C'thur and authorized Nralakk Federation officials, under penalty of arrest and a significant fine.