Difference between revisions of "Nanotrasen Corporation"

The primary logo of the NanoTrasen Corporation.

"NanoTrasen is the leader in all things Phoron... And more! Across the galaxy we provide the finest Phoron-combustion generators and Phoron byproducts, such as the Supermatter engines and singularity fields to bring power to your neighborhood! We continue to make significant advances in other major fields ranging from the hydroponics, to genetic research, to information technology and robotics! As a proud employee of our corporation, we encourage you to take active part in continuing to advance our our scientific knowledge for the good of the human race, and your pay check!"

NanoTrasen is the corporation the player works for. Formerly a biotech research company NanoTrasen Corporation’s size, influence, and wealth exploded to previously unthinkable heights after the discovery of Phoron and bluespace. It has a net worth of 730 trillion credits and 440 million employees and a vast fleet of ships and stations.

However, NanoTrasen remains an extremely controversial mega-corporation, accused of buying Tau Ceti outright, bribing politicians, and performing illegal experiments in the frontier of human space. NanoTrasen is rumored to have their hands in every level of Tau Ceti's government in addition to a reputation for mistreating their workforce in the name of the bottom line. The corporation is also suspected of instigating wars on Adhomai and Moghes for the purpose of manipulating the species' into lucrative deals for profit.

There have also been concerns about NanoTrasen’s use of loyalty implants. These minuscule head implants have a single job: influence an individual’s judgement to suit the corporation’s needs. Though automatically deactivated when the individual is not working, there are rumors that some people’s initial side effects of anxiety, headaches, and insomnia are actually signs of the implant making permanent changes. There are also rumors that strong enough emotions or stress can override the loyalty implant, though this is usually detected by the automatic deactivation network and the implant is quickly replaced.

Motto: The leader in all things Phoron!

NanoTrasen maintains a heavy direct pressure over roughly 75% of human states and factions, with numerous NanoTrasen manufacturing sectors, research and development laboratories, and orbital facilities. NanoTrasen property can be found in most of human space if one looks hard enough. 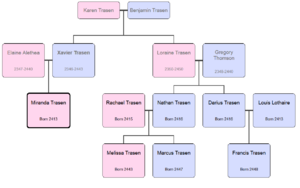 NanoTrasen is managed by the Chiefs of Staff, who are advised and appointed by the Board of Directors. The Chief Executive Officer, currently Miranda Trasen, has the ultimate authority over the corporation. Trasen herself is also a majority shareholder, making her the wealthiest human in the galaxy. After the Chiefs of Staff and Board of Directors, power is delegated to Sector Command comprised of the Duty Officers and Central Command Internal Affairs (CCIA) personnel. Sector Command in turn delegates power to individual Station Command personnel. 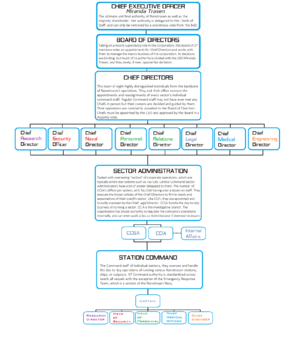 The hierarchy of the NanoTrasen Corporation.

With their headquarters in Tau Ceti, NanoTrasen has spread throughout much of human space, digging into every hold the company can find. Here are the locations of their primary and largest branches.

Mendell City, Biesel, Tau Ceti: The Mendell City branch in Zhengfu District oversees much of NanoTrasen’s activity in Biesel. There is a small water garden on the ground floor for public use that is surprisingly serene, considering the owner and the nearby looming skyscraper. Security is extremely tight in the facility, though no simple visitor would be the wiser.

New York City, United Americas, Sol: The New York City branch is responsible for NanoTrasen’s activity in Sol. NanoTrasen’s New York City Headquarters stands directly next to the World Trade Center, considered a very fitting placement by observers. It is rumored the Trasen family penthouse is in the NYC building, though none know for sure.

Oran, Epsilon Eridani, Eridani Corporate Federation: The Oran branch is in charge of NanoTrasen’s activity in the Eridani Federation. Though not as prominent as other megacorporations in Eridani, NanoTrasen manages to keep its place by recruiting Eridanians solely based on talent, ranging from suits to dregs to tunnel runners and everyone between.

Kuenoi, Xanu Prime, Xanu: The Keunoi branch oversees NanoTrasen’s activity across the Frontier Alliance. As apart of the corporate complex building with the other corporations in Cingnim District, NanoTrasen protects its assets by having a visiting time of one hour, between 3 AM and 4 AM, and imposing heavy fines on “trespassers” and by pushing for harder convictions on corporate espionage charges.

Formed in 2346, Nanotrasen started out as a small company, whose research was mostly based around gene-therapy in the heart of human space, Mars. NanoTrasen was effective at patenting methods that lead to more cost effective medical coverage plans for business use, primarily through aggressive business tactics than personal research brilliance. Many minor medical research facilities ended up on the unpleasant end of Xavier Trasen's desire to make a name for himself and shark-like approach, and were bought out and taken apart for his company's capitalization. By the end of the decade, NanoTrasen became a trans-stellar entity specializing in genetic engineering and medical research.

In 2417, NanoTrasen discovered Phoron in the Tau Ceti system in the Romanovich Cloud. This new resource allowed the generation of immense amounts of electricity and could be used as fuel for FTL travel, out-dating everything that had come before it. NanoTrasen began exploiting this new resource aggressively, setting up numerous stations and outposts in Tau Ceti to exploit the resource while sending out many new probes and drones to discover more.

Research facilities, stations, ships and other installations were being built faster than ever. NanoTrasen, capitalizing on its newfound wealth, managed to bankrupt and absorb many other companies on a larger scale than ever before and soon changed their name to its modern form. This only further increased NanoTrasen's power and scope, ratcheting it up to the status of a true super-corporation, the most powerful business-empire in the known galaxy.

"Get more of Getmore!”

Getmore Corporation is a major subsidiary of NanoTrasen, often supplying NanoTrasen’s vending machines with their products or helping ship bulk goods for the company.

Getmore is a major food supplier throughout the Sol Alliance and the Republic of Biesel. Many can find Getmore products in grocery stores, vending machines, and fast food restaurants all under the Getmore brand. The company also doubles as a major delivery service, boasting near-galaxy wide coverage and the fastest shipping speeds.

Chip’s Quick Shipping: A major shipping service offered by Getmore that goes all throughout human space.

Getmore Nougat Candy Bar: A brand of simple nougat bar made with real sugar and no artificial preservatives.

Getmore Cup Ramen: A brand of cheap mass-produced ramen that self-heats with 10 mL of water.

4no Raisins: A brand of boxed raisins with the tagline “Best raisins in the universe!”.

Space Twinkie: A brand of small sponge cakes filled with synthetic white filing that are guaranteed to last upwards of 150 years.

Bread Tube: A brand of sliced bread shaped into a tube.

SkrellSnax: A brand of cured fungus from Jargon IV made for Skrell. Almost like jerky.

Mo’gunz Meat Pie: A brand of meat pies made from stok meat packed into a crispy crust.

Razi Snack Corned Beef: A brand of corned beef and preservatives imported from Earth and canned on Ourea.

K’ois Bar: A brand of bland K’ois bars rich in syrup and injected with extra phoron made exclusively for Vaurca workers.

Getmore Corporation was founded by Chip Getmore shortly after the Mars Catastrophe of 2298, focused on producing cheap and accessible food for the masses of the red planet. The company was later acquired by NanoTrasen to supply its facilities, spreading from Mars to the rest of the NanoTrasen’s holdings. Getmore's products are among the most famous junk food brands in all of human space, feeding countless hungry children, college students, and employees.

"Our stars are bigger than real stars!”

Ingi Usang Entertainment Co., abbreviated InUs, is a major subsidiary of NanoTrasen, handling the production, editing, and distribution of holovid shows, music, and other art mediums.

Though InUs is based in Sol, a number of their holovid shows are prominent through much of the Sol Alliance and somewhat popular in the Republic of Biesel. InUs’s major influence, however, are their musical groups. Members of InUs’s record label are often widely known through Sol Alliance space and their music, clothing lines, and makeup brands are at high demand.

True Lifestyle: A holovid network focusing on life throughout the Sol Alliance with shows like Real Time Security, One Love For Many, The Solarian Culture, and Living Big: The Lives of the Famous.

ETX Network: A holovid network focusing on series shows occasionally broken up by Cham Usang Records material with shows like Love Me Right, Dark Days Ahead, No Names, and Chamu Hour with Sunmi.

Cuentas?: A holovid network focusing on news and celebrity gossip with shows like The Day with Njeru and Susanto, That Good Stuff, The Spotlight, and The Orion Network.

Nana’s Network: A holovid network focusing on hobbies with shows like Cooking with Kayal, The Free Folk, and Robust Life.

Founded by Songmin Sang in 2214, Ingi Usang Entertainment Company remained a fairly minor corporation until being bought out by NanoTrasen in 2340 for “strategic marketing”. Though InUs faired bettered, it was not until 2397 when Binyaria, a Venusian aerostat, opened the Chiye-Gyo District to corporate investment. Between the untapped Venusian entertainment industry and cutthroat corporate war with BP Entertainment Inc., InUs flourished by debuting musical groups that quickly became insanely popular. In 2438, the company moved its headquarters to the Chiye-Gyo District.

The NanoTrasen corporation maintains a large fleet of ships and stations for varying purposes, ranging from research to transport to medical to exploration. These ships form the backbone of NanoTrasen’s transportation of personnel, cargo, and research from system to system and planet to planet.

The military arm of this fleet is known as the NanoTrasen Navy, which is overseen by the Chief Naval Director and his Sector Commanders. The fleet Utilizes ships from simple patrol frigates to impressive drone carriers, like the NMV Icarus that patrols the space around the Aurora and Exodus. Some ships even have attachments of ERT teams that can respond to emergencies across their respective system.

Every mega-corporation has some sort of orbital fleet to protect their assets, but NanoTrasen is notable in that it is the only mega-corporation that fields a fleet completely independent of government contracts or subsidies. This has lead to accusations against NanoTrasen of fielding the equivalent of a mercenary army, one that can easily intimidate governments and is large enough to require a consolidated effort from the entire fading Sol Alliance to defeat.

NTHQ - NanoTrasen Headquarters Some of its largest and/or most expensive holdings are listed below.