This section or article is a Work in Progress.
Assigned to: None

Please discuss changes with assigned users. If no one is assigned, or if the user is inactive, feel free to complain on the forums or try summoning another staff member.

The Emergency Response Team (ERT) is the elite asset protection service of the Nanotrasen corporation, you are a member of ERT Phoenix, the team assigned to oversee research facilities in Tau Ceti, including the NSS Aurora, amongst other stations.

A good question, you are a trooper of the ERT, a highly trained operative ready to work with his (or her) team in order to return the station to survivable conditions.

Upon spawning you will be given a number of choices. So lets talk you through them: Name- The first pop-up you will get is to enter your name, don't forget your rank though! For your first time it is advised you label yourself as a Trooper (Tpr. [name]), as you become more experienced you may well get a chance to be a squad leader, known as a Leading Trooper (L/Tpr. [name])

All species found on the Aurora can be a member of the ERT, except for IPCs, vaurca, and diona. Additionaly, only humans and skrell can be leading troopers.

Remember when you spawn in, to change out of your duty uniforms into your combat uniforms, unless otherwise ordered by the team leader.

Alongside you will be other troopers, generally 2 or 3, but depending on the situation we can have multiple teams working together. In addition to troopers, there will be the team leaders, in exceptional circumstances NT may see fit to deploy a Sub Officer to lead the larger teams, or an ERT Commander.

You can identify who is who by the colour of their jumpsuit or body armour, or their specialty by the colour of their hardsuits. Trooper - Your uniform and body armour is marked with green highlights, or a red EVA suit. Leading Trooper - Your team leader will be wearing a light blue highlighted uniform and body armour, or a light blue EVA suit. Specialist Trooper - They run around in a white medical or yellow engineering hardsuit or armor. Commander - ERT Commanders will have old highlighted uniform and armour. 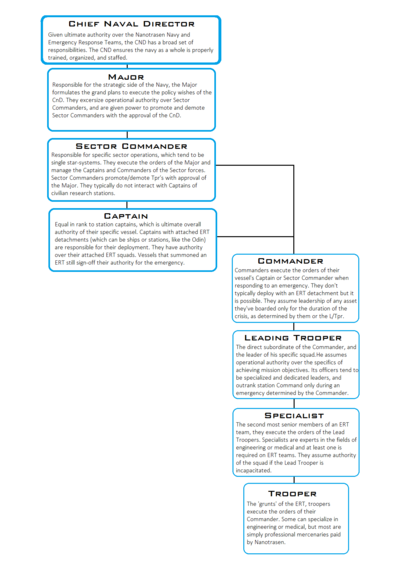 As a member of the ERT, your objective is to handle the emergency situation that the station has reported by any means necessary, and return the station to normal operations.

You have a selection of powerful equipment, an ID with all-access to the station's airlocks, and the authority to take charge of the station if you need to in order to accomplish your mission. However, remember that the Heads of Staff and Captain are the real people in charge of the facility. Your team shouldn't be relieving them of their duties or overriding their authority without a good reason for it, such as one being hostile, actively obstructing the mission or assisting hostile elements, or refusing to perform their job functions.

As a member of the team you have a choice of three specializations:

Engineering - The engineer specialists don orange hardsuits and are well trained in construction and deconstruction and are able to repair the vast majority of faults on a station, or get you into just about any room.

Medical - Medical specialists will be seen with white hardsuits, they are trained in advanced emergency first aid and are essentially field doctors, capable of stabilizing and treating patients and supporting station medical staff.

What a very good question, the specific tools you will need will vary by situation, but can be split into 2 categories, your essential tools and your task specific tools.

You will have access to two vendors, the SecTech which sells the standard things such as flashes, pepperspray and handcuffs, and the Nanosecurity Plus, which sells more specialized things, and the vendor you will want to focus on. It sells the ammunition you will need, and also sells tactical masks, tactical shields, and tactical knives. Get those, in addition to the ammunition you will be using for the weapons you chose.

The Leading Trooper's Room contains a lot of useful things. Let's look at everything.

Beyond the standard Armory, there are three vehicles that can be chosen should the situation warrant it, defer to your L/Tpr for permission should you desire to take one. They are located in the Special Operations Command room. They are:

Ontop of the normal armament available to the ERT, there is a special equipment storage reserved for Admin and Event use, spread around the Special Operations department, these include: