You're a ragtag hired gun; you've been hired by a corporation to deal with one of their most influential and well funded opponents: Nanotrasen Corporation. Together with your team you're going to help your hirer's company return to the top of the stock market and make sure NanoTrasen falls to the bottom.

A team of highly trained and deadly mercenaries has been hired to head out to the NSS Aurora and ensure the share holders re-consider their views on the almighty NanoTrasen. Luckily the mercenaries have access to a wide range of tools to assist them on their mission. Ranging from a simple revolver to the advanced energy crossbow you have the tools to get the job done.

Extended skillset - You are equipped with whatever skills you need to achieve your objective, and no more.

Aurora comes with an implemented antag only OOC, Mainly used for talking gimmicks with your fellow nuke ops; however, you will find yourself in gamemodes where more antags exist on station. Use AOOC to discuss gimmicks and tactics that you believe could make the server fun. Please note that metagaming with this will possibly lead to a warning or a full on antag ban. Follow the Server Rules and remember not to IC in OOC. If there's any questions, please ahelp it.

Congratulations you've been chosen to fill this antagonistic role. Now the first thing you should do before launching your inevitable attack on the station is to sit down with your fellow gunmen. Discuss and create a plan for your team to follow. There's no set leader of your team but you may find someone quickly take control of the situation which is perfectly okay, provided they're sensible about it.

You may notice on the table of the room in which you wake up is a sheet of paper with a code written on it, this is the nuclear code - a code used to activate a nuclear device alongside a Nuclear Authentication Disk. This is typically your fall back plan should Plan A fail. 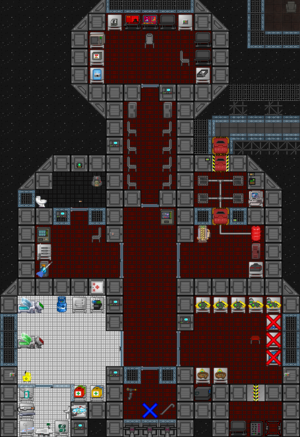 The high tech mercenary shuttle, comes with a variety of infiltration equipment like a half finished teleporter and a cloaking device!

Now before you run nilly willy into the station, you'll discover an armoury full of EVA gear and weapons, as well as a Radio Uplink for special items. You'll definitely want to pick the most fashionable suit and preferably a weapon too. It's also recommended to discuss what you will use the radio uplink for as it comes with a finite amount of crystals.

If you're one of those folk who typically tend to lose things it might be a good idea to just move the armoury contents onto the shuttle should you need a spare as you won't be coming back once you leave.

Depending on your plan, your selection of gear may vary. Typically you'll want to take a standard issue C-20r Submachine gun. This firearm has a high rate of fire, can be used one-handed, greatly speeding up reloads, or enabling you to do things without completely letting your guard down, and is generally lethal. Not the best weapon for hostage taking as it tends to cause internal bleeding and leave shrapnel behind which can be quite pesky to deal with, also these eat through bullets like engineering does metal so use it sparingly.. You'll also notice you also have access to an Ion Rifle, a weapon which has the ability to disable electronic devices. Especially effective against Cyborgs and crew with prosthetic limbs and organs. Additionally, 2 STS35 Assault Rifles can be found, harder hitting than the submachine guns, but requiring both hands to fire. One final standard weapon you'll find is an energy gun, a double edged sword - Stun mode which incapacitates and Lethal which is self explanatory. However these require frequent charging and have limited shots.

The radio uplink is a remote item teleportation device, you'll find it on the armoury floor. It can be used to summon various items out in the field which will aid you in your plan.However they run via tele-crystals and have a finite amount, forty to be exact.

You may also consider other items like the Teleporter circuit board allowing quick and easy access to the stations many restricted area's.

So, you're all geared up, have a plan and are raring to go? Then go ahead and board your shuttle and close the airlock behind you. Once aboard use the shuttle control panel in the cockpit to move to the Aurora. You'll also note a cloaking device button, if disabled the station will receive a warning about an unknown ship heading their way which may make life difficult for you. There are various positions to move the shuttle at the Aurora, ranging from the Telecommunications satellite and different holdings around the station.

Your headsets have an additional channel added to communicate with your fellow teammates access it by using ':t' in your message. This channel is private to your team only thus confidential. Remember: You can change your headset frequency to 145.9 to talk on the common channel.

All fellow mercenaries have a large S next to their player ingame, so try and avoid shooting them by mistake especially while in disguise.

The voidsuit can be placed in a backpack, useful for stealthier infiltrations with plans to go loud, or to carry one for a captured mercenary, when you move to spring him from captivity.

The cyanide pill (the one you spawn with in your box, yes that one) can be used for a quiet kill, rather than a desperate attempt to take your own life.

Did your plan fail? Have all fellow agents been killed? or have you just met flatout unbeatable forces? Then time to use Plan B. It's time to activate the stations Self Destruct Device, or Nuke for short. To use it you're going to need a few things.

Remember the nuclear authentication I mentioned earlier?, it's typically stored by the Captain somewhere. Luckily you have a pinpointer device from the armoury to help you locate it should the captain become indisposed. Simply click on the pinpointer to activate it then follow the arrow on its screen to find the disk.

Also the nuclear code from earlier comes into play now, so if you forgot it or lost it then stop reading now and sit in the corner and feel ashamed, if not read on.

Now that you have the disk, return to your shuttle and grab the Nuclear Device located in the compartment at the very aft of the ship. Keep in mind that the nuclear code you received at the start of the round will only work with this nuke and will not work with the station's nuke or any others.

Once you've found an appealing place for your nuke, you'll need to properly set it up, simply follow this handy and simple guide to activating a nuclear device: