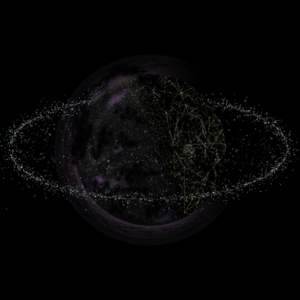 Oran itself, heavily polluted from surface to orbit, and dotted with megacities.

Oran, or Epsilon Eridani II, is a planet slightly smaller than Earth. It is the only planet in the Eridani Federation that has been terraformed in its entirety. A jewel of Hephaestus Industries, it is the largest center of its research and development. However, it has also evolved past that to be a very notable tourist destination with its bustling nightlife and blooming culture, and is considered to be the face of Eridani at large.

The climate here is arid, with a somewhat high average temperature and low humidity. The majority of Oran's surface is occupied by vast mines and quarries. Mining drones constantly scan the non-urbanized areas of the planet in search for exotic materials that are known to occur in the system.

Oran is the most populous planet in Eridani Federation, with its official population being somewhere around 19 billion (officially registered) people.

It's unusually not uncommon to see corporates speaking Freespeak on Oran, given that it's Hephaestus Industries' official language.

Oran is the crown jewel of the system. Life doesn't get better elsewhere in Eridani, granted that the person is wealthy enough, of course. This means that there's particular care taken in making the planet seem as perfect as possible to the outside view. Many state of the art institutes are available on Oran, owned by Hephaestus Industries.

A private university dedicated to both education and research, known for both its high quality of education, advanced equipment... and high costs. Its students, however, are considered to have their future basically safely sealed for them - graduates are almost guaranteed a job at Hephaestus, and if not, a degree from here would be considered very prestigious by other corporations as well.

Relevant Jobs
This university regularly produces brilliant scientists, roboticists and engineers. Those not already hired by Hephaestus may often go on to occupy leading positions in these fields for other corporations, such as NanoTrasen.

Asmara is often called the quintessence of the luxurious lifestyle of the rich Corporates on Oran. Located on the roof of Oran's tallest skyscraper (called the Spire, rather than numbered, as is usual for Eridanian addresses), it is considered to be not only very expensive for Eridani, but also one of the priciest places in the Orion Spur in general. Even the mere admittance has a requirement of making at least 200 thousand credits a year (which is often the butt of jokes, as nobody knows how exactly Asmara is checking that value), and the food is merely secondary to the mere prestige of visiting.

While people enjoy transpotation by bridges and pod tubes up above, Oran is also very well-known for its vast network of underground tunnels that is used by delivery drones. While a clever engineering solution to aesthetic concerns, it also houses a large population of Dregs, who live a nomadic life in these tunnels (commonly refered to as "tunnel runners"). Alternatively, some prefer to live in the Underworld.

There are a few hastily dug doors in the underground tunnels - leading to The Underworld, a massive underground slum dominated entirely by dregs, resembling a fully-metal built favela, where Hephaestus Industries' mines and a network of natural caves once were. It lies square under the city, giving those without opportunities a place to be, or a place to conduct criminal activities in. The Underworld is anarchic, with the only regulation being simple eye-for-an-eye principles of individual inhabitants. It has slowly been built over the years by stealing several resources, usually from quarries in the surface or from supply drones in the underground tunnels. Many illegal goods are offered here, for a low cost; be it low grade prosthetics, cheap drugs or hired services.