Difference between revisions of "Notable Dionae Systems and Locations" 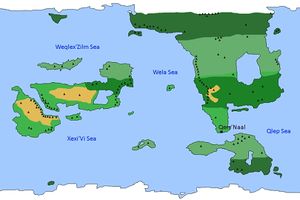 Epsilon Ursae Minoris has only one settlement, Qerr'Naal.

Epsilon Ursae Minoris is known across the Orion Spur, not only for its untouched wilderness, but also that it was discovered to have been harbouring a Dionae Colony. It is currently a well-known site for pilgrimages for the followers of Dienabi.

The Venter System, located near Konyang, holds the Venter Cetus which is renowned for their mastery of atmospherics. The Cetus is typically left to its own devices, but sometimes their expertise is requested.

The Royal Garden of Moroz

The Royal Garden of Moroz is a Biosphere connect to the Emperor's Palace, and it is also where all of the Dionae found within the Empire of Dominia originate from. Due to the unsuitable environment on Moroz, it is extremely paramount that a biosphere exists in order for Dionae to survive.

Qerr'Naal is the only settlement found on Epsilon Ursae Minoris. It is said to have a population of roughly a thousand - the majority being that of Dionae. It is currently governed by Director Memoirs Of Those Passed.