Difference between revisions of "Moghes"

Moghes, which is the third planet from the Uueoa-Esa star, is the home planet of the Unathi. Before the Contact War Moghes enjoyed a complex ecosystem similar to Earth. Currently Moghes is suffering extensively from rapid and catastrophic desertification across the majority of its surface due to radioactive fallout destroying the complex ecosystems. Moghes is one of two habitable planets in the system, the second being Ouerea. Moghes was discovered in 2433 by a Sol Alliance funded expedition. 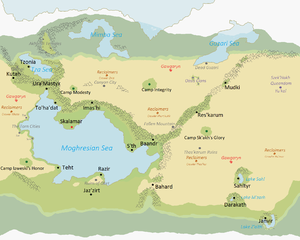 A map of Moghes, with cities and the Wasteland labelled.

Before the Contact War most of Moghes surface was an earth-like with a variety of biomes. Most of the surface was dominated by grasslands, temperate forests, extremely large chaparrals, and a desert north of the mountains of the Moghresian Sea. Alpine forests are found in most mountains. Due to the large flat surfaces that make up Moghes most of the planet experienced roughly the same variations in climate across the planet.

Skalamar is the capital of the Hegemony, and is under the Lordship of the Izweski themselves. It is the most populated city on Moghes, with large marble and concrete walls that continue to expand and be reinforced as the cities boundaries grow. The city is overpopulated and dangerous, often working the City Watch members through the night. Around Skalamar are large slums, and the gates of the city are constantly being hassled by migrants from the Wastelands that wish to come in. There are, however, safe alcoves in the central Gold District, where noblemen and the wealthy live in a walled off community guarded by mercenaries of all species. The Izweski, however, have their keep on the tallest and most central point of the city. This keep is securely guarded, and walled off on all sides except the main entrance on a central street.

Skalamar also houses the central religious center for the Sk'akh faith, the Third Scept of Sk'akh. The Second Sept was destroyed in the war, and the Third Sept was constructed from its rubble to replace it.

S'th is a booming coastal trade city, filled with corruption.

Camp Integrity is much like a wild west frontier town. It's a star-shaped fort with a central tower, with a single large starport in the center. Originally constructed by the Izweski during the war, the fort has been surrounded by terraforming equipment and giant tent-cities. The only source of food comes from the shuttles that arrive to the fort, and so there is constant unrest in the marketplace, with brawls sparking whenever someone says they need the food more - for a dying family member, a child, or just to survive. The local levy gets exclusive first dibs on food supplies, but are still rationed and kept hungry simply out of necessity.

Mudki is a very traditional mountain city, with ancient buildings, although it has been recently falling into disarray and mis-maintenance. With the deaths or imprisonments of almost all the local shamans, the temples and walls that require constant maintenance have already begun crumbling.

The Outposts were small enclaves that survived the encroaching Wasteland and never faced direct hits by atomic weapons. Typically they were fresh bodies of water that were the only things keeping the surrounding plant life alive. Their current state on the map is a massive expansion of their former size; starting in 2460 the Hegemony began terraforming efforts using these locations as starting points. Their efforts initially made rapid gains, leading them to their current size. But the intense investment of complex equipment and trained personnel, combined with the incredible harshness of the Wasteland, has lead to diminishing returns and the Outposts have otherwise stagnated in their growth.

A year on Moghes is 360 days divided into 15 months with 24 days each. There are three conventional seasons on Moghes, revolving around the average global changes in climate throughout the year.

Versakh is the first season. It lasts 5 months and is typically marked with warm, wet weather and an average global temperature of 40°C. Versakh is typically a time of rejuvenation and relaxation. During Versakh it's completely acceptable for Unathi to take time off of work during the afternoon when the temperature is the hottest in order to nap or bask in the sun. This also marks the beginning of the typical hunting season.

Kasavakh is the second season. It lasts 5 months and usually brings cooler, drier weather with average global temperatures around 35°C. Kasavakh is regarded as a time of productivity and bounty. Kasavakh is typically the busiest time of the year for Unathi. During hot days Unathi are still permitted to take time off in the afternoons but doing it too much during Kasavakh makes them appear lazy.

Travakh is the third season which lasts 5 months and marks the end of a calendar year. It is the driest time of the year for most of Moghes, with temperatures dropping to an average of 20°C until the beginning of Versakh. Travakh is regarded as a time of rest and contemplation. Holidays during the months of Travakh tend to focus on honoring and celebrating the family, both past and present, and tend to be in-door affairs. Outdoor activities tend to lull during this period, which is when animal populations used as prey by Unathi hunters can recover for the arrival of Versakh's hunting seasons.

The Wasteland suffers from extreme fluctuations from the standard seasons. The Wasteland typically has average temperatures of 40 - 48°C near the equator with the highest recorded temperature being 52°C during Versakh, and these record temperatures plummet to -56.7 - 0°C in the northern and southern hemispheres. The majority of the Wasteland near the equator remains near 0 - 10°C during Kasavakh and rarely goes above freezing during Travakh, remaining near -12°C at average. Due to a lack of vegetation or topsoil the Wasteland also suffers from massive sandstorms. Wind speeds typically reach 92 km/h (57 mp/h). Unathi can only survive in temperatures -10°C to 42°C without suffering damage, which makes the Wasteland incredibly difficult to survive without specialized equipment.

Many plants native to Moghes are more sensitive to radiation than their earth-based counterparts. Due to the combination of ozone depletion from the use of nuclear weapons and direct contact with radioactive fallout a vast majority of vital ecosystems across Moghes have died and turned into barren deserts with the planet currently going through the third mass extinction event in its history. The systemic collapse of the global ecosystem is on-going and current projections estimate the planet will completely lose its habitability within 50 - 100 years. Current Izweski projects are focused on slowing down the rate of collapse, but this process has proven difficult to implement politically. Despite this, some plants and animals have retained their presence on Moghes. 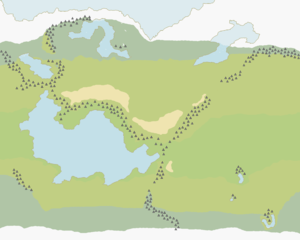 Threshbeasts are tall, hoofed salamander-like creatures that stand at 8-10 feet tall on average and walk on four legs. They have colorful bodies with a tough, leathery hide that acts as a natural defense against predators. They have two eyes and slitted nostrils. They are herbivores and naturally graze. Their speed and herd mentality made them one of the first large animals to be domesticated by Unathi. Threshbeasts were used as a way to travel very quickly over vast distances, as the animals have incredibly high stamina and can run 30 - 42 miles per hour over 15- to 25 miles before needing to stop.

Warmounts are incredibly robust and fierce animals that continue to be prized across Moghes. They are similar to an Earth rhinoceros. Adult Warmounts tend to be over 1 ton in weight with a thick protective skin, typically 4cm thick. They have small, black eyes, a single nostril, and lack a tail. They are herbivores and typically graze, with all their teeth being small and flat and unsuited to a carnivorous diet. When threatened a Hegeranzi uses the three horns on its head to try and gore the threat. Hegeranzi can also charge, which is what they are famous for: a Hegeranzi can reach 46 miles an hour in charge. They tended to live in small herds with a tight-knit family structure, which early Unathi exploited in order to domesticate them. They are typically used in warfare. They have famously long lifespans, typically living up to 92 years old. Hegeranzi take a long time to grow physically and emotionally. They reach the majority of their size by age 16, but often continue to grow in size and weight until they're about 20 years old. Because of the investment in time and resources to raise a Hegeranzi they are rarely butchered or used outside of battle. When they die traditionally their bones are harvested and turned into jewelry or ceremonial armor, though this practice has waned in modern times.

Tul are large, muscular, leathery creatures, about a head taller than your average unathi. They have sharp claws on each feet and the strange ribbed, flat teeth found on most herbivores. Their most striking feature, however, is their tusks. A large array of long, pointed tusks protrudes from their skull and jaw. They move like a cat - deliberate, pronounced movements, with very broad shoulderblades.

They have a long flat tongue they use for feeding. Tul are commonly poached for their tusks which can be used in various luxuries, from jewelry, to cutlery, to pieces of ornamental weaponry. Hunting Tuls requires personal permission from the Lord of the land, and the honor is almost exclusively reserved for the landed elite. Common Unathi found poaching Tul's or illegally trading the tusks are often given harsh prison sentences.

Owning these animals is reserved for only the richest clans due to how tightly they are controlled. They are sometimes brought out for large events by Lords to impress guests and visitors. Sometimes they can be found wandering the private gardens of the wealthy.

The tul also have a few small myths surrounding them. According to some regional cultures, the tul cultivated the forests before the Sinta could walk on two feet, whereas some say they were responsible for raising the sun - sticking their long tusks into the ether and pulling it back up into the sky. Some of the oldest clans will have a tul displayed as the clan's insignia.