Located at the southern end of engineering in Space is the Singularity Engine. A radiation pulsing, self contained, miniature black hole that is your job to activate and maintain.

How To Set Up The Singularity 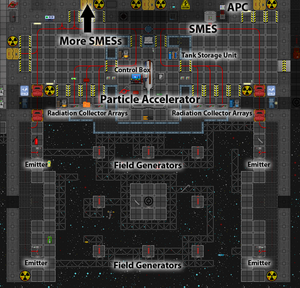 It's really not that hard to set up the singularity properly and keep it maintained. This guide will assume that you're doing it alone, either because you're the only engineer that signed up, or because everyone else decided they had better things to be doing. First off, you'll need to know what to bring to the singularity room with you, which you can aquire handily from around Engineering.

Now that you have your supplies, it's time to get to work!

Note: Each of the following "Setting Up" sections can be performed individually or with additional team members. Order of operation does not matter as long as "Finishing Up" is done last.

There are 6 of these are located in the Engineering bay.

There are 6 Radiation Collector Arrays on either side of the Particle Accelerator.

Setting Up the Particle Accelerator (Engine)

Caution: Do not bump into the accelerator before it is secured with a wrench. If you knock a piece out of place, right-click > "Pull" it back and right-click > "Rotate" to put it back in its place.

Setting up the Singularity

Note: Sometimes the singularity will cause EMP pulses if something is close to it and exposed to its radiation. These pulses can cause weapons to misfire and even disable the emitters. Keep an eye on it.

Note: Read the Continued Upkeep section above to learn how to fill

Gas Tanks, which will increase power output exponentially. This enables you to set the Input Level of each SMES to their maximum - 200,000.

It is possible to wire the APCs directly to the main power ring. A good spot to do this is to the port end of engineering, near the bolted airlock. Lift the floor tiles and run a wire from there out into the maintenance tunnel and link it to the wire running through there. This allows you to charge APCs directly if somebody disables the SMES in engineering.

Another interesting point is that the APC in engineering will not charge from its own SMES unless this modification is made. Meaning that when the collectors are turned off, containment fails pretty quickly. With this quick modification, this gives you time to notice and fix the problem.

If you added the maximum amount of phoron to the collectors, this modification can generate ~6,000kW of power for the station. Enough to charge the 3 Engineering SMES and the 4 Solar SMES at 200kW input. Therefore, run a tiny bit of wire from the maintenance tunnels to each solar SMES, and set them each of them to an input/output of 90,000/3,000. This will ensure massive amounts of power reserves (enough to last hours with the engine off).

Turning off the Engine

Occasionally, bad stuff happens. Well, most of the time, bad stuff happens. Sometimes it is necessary to deactivate the engine as safely as possible because nobody can maintain it. Other times meteor showers and bombs endanger your containment machinery. Whatever the crisis, if you have followed the steps above it should be safe to simply turn the accelerator off. The engine will continue to generate power as the singularity starves and shrinks, so containment SHOULDN'T fail until the singularity is sufficiently small enough that it cannot move and pull stuff into it. However, the ikkle baby singularity will take a long time to die completely, leaving it exposed to potential suicidals jumping into it, giving the singularity energy to expand again. (Cool fact: Engineers provide a singularity with a lot more energy than you'd expect).

Sometimes it's a good idea to charge the SMES quickly (using the optional techniques above) and then turn off the engine safely until you need power again. This means that poor solo-engie can actually go do other stuff and leave engineering for a bit without inadvertently destroying the station.

The singularity is - along with massive phoron infernos and large scale bombings - one of the most brutal forces on the station. Dangerous enough when set free, it becomes a lag-inducing, shuttle-calling, indiscriminately murdering monstrosity when given a directed path by a Singularity Beacon, leaving nothing but debris, body parts and cold hard vacuum in its path. Perhaps the most dramatic way to end a round as a traitor, it can even eat the emergency shuttle itself, restricting escape to those few smart or lucky enough to grab EVA gear. Its a very effective weapon to use against assassination targets that commonly spend a lot of time in one area, such as scientists.

Setting the singularity free is not the easiest task to complete as a regular crew traitor, and you will get robusted in short order if you are caught. Generally speaking, all you need to do is disable the singularity containment field. This can be accomplished by deactivating the emitters, which is very hazardous due to the gravitational pull of the singularity, its radiation, and the hazards of the containment system itself. Alternatively, you can disable the engineering APC. If you are not an engineer and get identified doing this, you can expect to not make it onto the emergency shuttle alive. Another option is deactivating the collectors, as the Engineering APC cannot charge from the SMES, this form of sabotage probably won'tbe noticed and will likely be blamed on engineer incompetence. The easiest way to release the singularity is accessing the engine control console and turning power up to level 2. Keep in mind that the containment field is designed to tolerate short term power outages, so if anyone notices the power failure before the containment field fails, then your attempt will be thwarted. Tip: Try turning the PA up to 2 for a while until the Singularity gets huge, then turn off the collectors after a few minutes. If the Engineering staff hasn't wired the Singularity straight into the system, it should fail extremely fast and you'll have a 5x5 singularity running rampant around the station. Be careful to not get caught in the pull, though.

Directing the singularity to a target area - be it the emergency shuttle bay or the bridge - requires a singularity beacon and a screwdriver. Don't hang around after you plant it. Putting the beacon somewhere outside the station is usually your best bet to ensuring the singularity reaches its destination.