Currently, the only planet known to have a Dionae Civilization discovered by Skrell probes in the early 2420s, it is now undergoing rapid advancement thanks to their access to technology - some gifted, some stolen from others. Untold beauty lies across the planet, but also the overwhelming mystery of how the Dionae arrived on the planet, as well as how did they unlock sentience without assistance from other sapient species?

Discovered by Skrell probes in the late 2420s, Epsilon Ursae Minoris was initially believed to be perfect for colonisation. Prioritized for further investigation, it was soon discovered that the planet was already inhabited - but not by pirates, or Dominian edict breakers, but instead a sizeable community of Dionae.

Preliminary investigations unearthed that the Dionae were in fact sentient, a trait unseen by Dionae found outside of other sapient species influences. The discovered prompted the scientific community across the Clash to rethink everything they ever knew about the species - including their belief that they were simply incredibly intelligent parasites.

Whilst communication was forbidden for the vast majority of the investigation, it wasn’t the Skrell that first communicated - but instead the Colony. The Dionae had formed a rudimentary radio tower out of their elderly, repurposing them to begin broadcasting to the outer reaches of the planet’s atmosphere. This allowed for the Skrell to open communications with the help of the Xuq Machine. After numerous months had passed, the investigation was deemed closed. The Skrell determined that although the planet was desirable, it was best left in the clutches of the Dionae, who quickly began to advance with the technology brought down to the planet by the extraterrestrial visitors.

However, one thing perplexed the Skrell. The Dionae venerated a journal, written in a language unseen across the Orion Spur. The Colony labelled it the ‘Deathflower Journal’ and depicted that the Journal was left to them by the Eternal, and that it foretold of the day they would return to the stars and embrace the Light, Energy and Essence offered by the Eternal once again.

Epslion Ursae Minoris is a planet that can only be described as full of untold beauty. 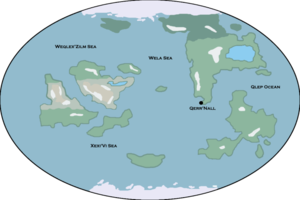 Epsilon Ursae Minoris is comprised of an earthlike atmosphere, with slight variations in the gaseous makeup. This has allowed for the formation of an intricate climate, that is affected by the rotation and orbit of the planet. Whilst a rainforest spans most of the planet’s continents, grasslands and boreal can be found on the latitudes closer to the poles - typically not inhabited by the Dionae. Average precipitation can reach as high as 1000 cm (400 inches) on the planet, which has allowed for the formation of many, many rivers across the planet.

Epsilon Ursae Minoris currently has two moons orbiting its celestial body - each roughly half the size of Luna. Analysis of the two have determined that the crust of the moons harbour abundant amounts of rare metals, mainly comprised of iron and nickel within its core. Respectively, Yluk and Yodon are expected to have mining operations completed on their surface - however, no plans have been put into motion as of yet.

Before first-contact, the planet had no requirement for a leader. Instead, the community would vote in unison. This all changed after the introduction of technology capable of sending the Dionae into the upper reaches of the atmosphere was reverse-engineered. Whilst still focusing on democratic practices, the Dionae instead are governed by a council of elders. Each ‘elder’ in fact being numerous immovable nymphs that have since relied on younger generations to sustain their existence. Each elder leads a certain field, or topic, of the planet - the fields being; Economy (Foundational Thoughts of Prosperity), Military (Growing Hunger of Insatiable Greed), Diplomacy (Discernment of Underlying Betrayals Waiting to Pounce) and Science (Probing Discoveries of Unknown Investigations).

Created in 2455 CE, the Epsilon Expeditionary Force was formatted with the aim of exploration, discovery and science - however, also served as a defensive force for the Planet. The Epsilon Expeditionary Force, or simply abbreviated to EEF, has so far seen huge success in its aims; and have expanded the Dionae’s understanding of not only their surrounding systems, but also technology.

The formation of the EEF saw the rise of biotechnology; machines capable of being integrated with the Dionae essentially allowing the species to become ‘living computers’. Whilst those that choose to become integrated with technology are capable of great feats, it is unheard of for this Dionae depart from Epsilon Ursae Minoris, and instead remain within the planet’s sphere of influence (be it on an Epsilon Expeditionary Force Vessel or planet-bound).

Growing Hunger of Insatiable Greed is one of few argus forms that have been integrated with biotechnology; which the Dionae uses to amplify its ability to respond to communique, issue orders and calculate tactical methods. Amplified by Probing Discoveries of Unknown Investigations’ fusing has lead to unparalleled technological advancement, whilst still decades behind most species in the Orion Spur, they are expected to ‘catch up’ by the 2500s CE.

The EEF follows the “Shh’sha’shu” thus its military ranking system follows those outlined in the "Chaa’shh’sha’shu."

Mostly untouched by the external influences of other species - the Dionae on Epsilon Ursae Minoris followed an incredibly rudimentary, if not uneventful, existence for millennia. Following an agrarian lifestyle, where most if not all, of the Dionae dedicated their life spans to simply farming the lands, praying to the Eternal and reproducing. It wasn’t until after the introduction of alien technology that the Dionae seemingly were ‘jumpstarted’.

Quickly absorbing the available knowledge, reverse engineering the various machinery left behind by the probes, the Dionae were able to implement and amplify their Colony. This seemingly allowed for the Dionae to form the belief that the extraterrestrials ‘gifted’ them the technology, a touching introduction and thus a sign of friendship.

Whilst most of the Dionae on the planet experienced life without such technological advancements, once it began it quickly soared. Within a decade, those that were against the technology were ostracized - deemed non-believers, or obstacles sent by the Eternal to push the Dionae to their limits. This belief formed the perspective that those not willing to adjust, will be left behind. It is a gift to be able to adjust, and to not do so is going against the Eternal’s wishes.

Despite the somewhat small extraterrestrial assistance, the Dionae have begun to despise those that prey on their vessels - Pirates. The plundering of the vessel, and often consummation of the Dionae by the Pirates, have begun occurring commonly - pushing for those to not only pursue advanced technology to reach other stars quicker, but to increase their military presence within the region of space.

As most Dionae, those on Epsilon Ursae Minoris follow the Eternal. A primordial entity that exists through the use of Essence, Energy and Light and most believe that they a part of the entity. More unique, however, is the fact that they have a Journal supposedly inscribed before the Dionae had achieved sentience. The Deathflower Journal has been described as featuring a language unknown to the greater majority of the Orion Spur, with only a handful of Eternal Overseers being capable of reading it. This has lead to great speculation on whether it is evidence of precursors or something else entirely.

The Calendar followed by the vast community of Epsilon Ursae Minoris stems from the idea of: ‘sunrise to sunset’. The subsequent creation of the Calendar revolved around the idea, with variations being detected depending on the season the planet was experiencing, which allowed for the formation of the Jzki-Wxi.

The Jzki-Wxi lasts six months, each with forty-four days. However, the accumulation of the days, as well as the reproductive periods of the Dionae, lined up to create: Utzs. Utzs, loosely meaning Day of Birth, occurs once every fifteen Jzki-Wxi, akin to that of a leap year. It is the designated day for Dionae to go forth, and commencing dispersing their seeds in hopes that they produce additional nymphs.

Jzki-Wxi is comprised of the following months;

Qerr'Naal, the planetary capital. The largest, and only, settlement across the planet. Little has prompted the Dionae to expand across the planet until the last few decades - with plans being made to expand into the mountainous regions in order to gain access to the valuable minerals kept within the arctic tips.

Lxzti Station, the orbital platform that rests above Epsilon Ursae Minoris. Mostly a communications relay that allows for interstellar communication to occur, as well as ship construction, the Lxzti Station was constructed in the early 2450s in hopes of bringing additional trading prospects towards the planet. The Chaa’shh’sha’shu Forces operate from this Station often dispatching themselves to continue exploring.