The History of Currency on Adhomai 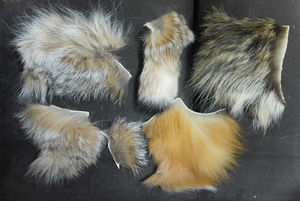 Scraps of various Nav'twir pelts: the pre-credit currency of Adhomai.

Although most of Adhomai's history is highly debated, one subject which everyone agrees on is the usage of animal pelts as the global currency prior to the establishment of the Sol Alliance Credit. For thousands of years, most Tajara have traded Nav'twir leather in exchange for goods and services. Initially, the entirety of the scalped furs was traded for their practicality as clothing, blankets, leather works, and even as an insulation material attached to the sides of houses. Over time this became impractical as inflation began to occur and the amounts for each transaction required Tajara to carry large amounts in carts to trade. A new system began to emerge where entire Nav'twir skins were not used as currency, but rather the amount of surface area as measured on the flesh side began to be used. "The knuckle" (2.3114cm) emerged as a standard unit that measured from the base of one's finger to the first knuckle. It was always common courtesy that the buyer's knuckle was used to measure the surface area when determining deals, however, a second innovation came when many Tajara began cutting their leathers into square knuckle segments for ease of transportation. The newer system was more practical despite sacrificing the ability to use them as clothing and other wares, and a brief fashion trend broke out to sew a knuckle over rips and tears in clothing. For most of history, this was the case, but inflation began to run rampant as M'sai hunted large numbers of Nav'twir. These inflation issues worsened as people began to counterfeit and circulate pelts of other animals on the market. Such over-hunting lead to large declines in the populations of wildlife. In order to correct these issues, monarchs would often ban hunting for years and even multiple generations until enough knuckles could leave circulation. These practices gave way to a sophisticated hunting licensing system. This system regulated hunting by taking into account both currency needs and wildlife population. These restrictions on hunting reduced the opportunities for M'sai to be pure hunters, which lead many to become soldiers.

Despite all these developments to aid the usage of pelts as currency, the issues with pelts lead to the adoption of paper currencies which were each backed by a certain amount of knuckles. Confidence remained low for many years as people continued to use pelts and distrust the banknote alternatives. Many schemes were ongoing at the time wherein banks printed large amounts of money without enough pelts to back them up. The distrust of paper currency still lasts to this day on the fringes of civilization where Sol Alliance Credits are largely useless. With time, the Njarir-Ahkran learned to better curb inflation and manage the currency with central banking institutions. These were often tied to the Parivara, with many mosques doubling as banks. The Father of the Parivara gained control of the currency as the Parivara rapidly competed out secular banks. This considerable influence was used to pressure many Tajara in subtle ways to convert to S'rand'marr worship, causing it to gain a considerable enough lead to be considered the majority religion. The banking components of the Parivara were largely taken over and discontinued once the People's Republic of Adhomai formed. Government officials took over the roles of banking that the clergy fulfilled, but many mosques still double as banks with government officials carrying out the banking components.

Adoption of the Credit

In the year 2426 during the revolution of the People's Republic, the Imperial Government adopted the Sol Alliance Credit in a push to gain outside support against the revolution. Initially, it had difficulties becoming widespread as commoners resisted the change and instead preferred to use their own banknotes. Distribution of credits across the planet quickly became a problem as the war negatively affected the trade of goods for credits, leaving the supply of them on the planet to remain extremely small. In 2433, Al-Mari Hadii's new government was able to lease the right to print Sol Alliance Credits from the Sol Alliance Central Bank, creating the Nal'Tor mint; this deal was later ratified by the Republic of Biesel following the breakdown of diplomacy between the PRA and Sol. The credit was able to become the dominant currency among the higher classes within the Republic after the supply became stable. The government held large currency exchange initiatives to convince common Tajara to exchange their knuckles for credits. These initiatives failed to gain widespread participation as many Tajara still kept their old banknotes. This phenomenon is the result of a marriage between local markets distrusting the new currency and the exceptionally expensive exchange rate to even acquire Credits. Many Tajara cannot even afford to turn in their currency for a workable number of credits, and many of their transactions require denominations far smaller than credit can provide them. The Credit has an exceptional purchasing power compared to a single knuckle banknote, creating a situation where many Tajara prefer to trade their Credits for their worth in old banknotes instead of using them. 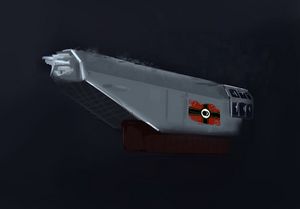 Prior to the first contact with alien lifeforms, the Tajara had been in the process of industrialization. The majority of the population then and still today had been agricultural workers or other assorted resource gatherers such as miners and woodsmen. As a result, Tajaran agricultural products, furs, and minerals dominate the exports the planet has to offer, primarily by undercutting the prices of their competitors for local markets with frontier worlds and colonies. There is a comparatively small operation of exporting products of heavier industries, such as steel, automobiles, and firearms. Some frontier planets prefer Tajaran automakers over their human counterparts for the ruggedness of the vehicles which are made for Adhomai's harsh weather. However, the primary value of Adhomai's exports does not lie in resources and products, but primarily in cheap labor. The People's Republic of Adhomai has many trade deals with NanoTrasen, the Sol Alliance, and Tau Ceti which make it easy for the average Tajaran to gain work visas for human space.

The planet of Adhomai is a developing one with a large population of consumers available and little industrial capacity for highly technological goods to provide them. As such, many corporations have found Adhomai to be an appetizing and untapped market for their goods. Commercial computers, Consumer electronics, laser weaponry, and plastics are all common imports flowing into trade centers in the People's Republic. Except for plastics, these imports tend to be highly expensive, and usually, only party members or members of the mob can afford them. Despite the popularity of these imports, the most popular import of all to Adhomai is pharmaceuticals. Medical practices and sanitation on Adhomai had only recently reached the capabilities required to have properly sanitized hospitals, antibiotics, and cities with higher birth rates than death rates when the first contact was made with aliens. With the introduction to futuristic and highly advanced medicines, the healthcare industry began to boom for the Tajara as the People's Republic's universal healthcare system began to purchase bulk quantities of pharmaceuticals and hire medical schooling professionals from NanoTrasen. The result was a healthcare revolution where average lifespans increased by over a decade, however many diseases native to Adhomai remain unknown by medical professionals to this day as the war prevents epidemiologists from gathering data in affected areas and liberal use of antibiotics by Tajaran doctors eliminate most samples.

There is a large underbelly of lawlessness on Adhomai as possibly state-sponsored organized crime has lead to impressive crime syndicates and criminal empires. For many Tajara, especially outside of the People's Republic, these are the method by which they can receive commodities which would otherwise only be available to people living in territories of the People's Republic. Everything from bootlegged movies and tobacco products to firearms and military-grade explosives flows through smuggling operations into the hands of everyday Tajara. Whereas these operations often occur to the benefit of the Liberation Army and the New Kingdom, they seem to be let to keep going for the benefit of what they smuggle away from Adhomai. In many markets where there is little room for competition, Tajaran smugglers are both renowned and infamous for drastically undercutting local prices with their cheap Adhomai-produced alternatives. The costs of living, production, and services on Adhomai are extremely cheap compared to most places in the galaxy, allowing for these smuggling operations to make exorbitant fortunes compared to their poorer brethren. However, moving cheap products to markets for sale is not the only source of income for the smugglers. Ha'rrons, as Tajara call them, frequently move people out of the system as well as products in exchange for money or favors. This service is largely useless for Tajara living in the People's Republic but is primarily how people from the New Kingdom or the Liberation Army leave the planet and become employed at NanoTrasen, which puts them under very little scrutiny in exchange for their cheap labor.